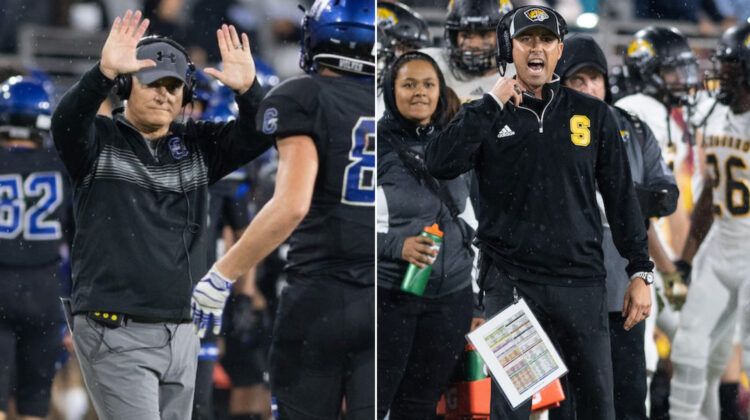 Saguaro head football coach Jason Mohns and Chandler head football coach Rick Garretson weighed in on the Pac-12 split and what it means for the future of college football. Mohns and Garretson faced off in the 2021 Open Division State Championship where the Sabercats took down the reigning champs. Both Chandler and Saguaro are notorious throughout the state for sending a handfuls of recruits to Division I football programs every year.

Garretson was also joined in the conversation by assistant running backs coach Eric Richardson (also the head coach for Chandler track and field) to give their thoughts on the state of Pac-12 and college athletics.

When Jon Wilner (@Wilnerhotline ) broke the news that UCLA and USC would be leaving the Pac-12 for the Big 10 on June 30, it came as a complete shock to everyone, Wilner included. One week later the conversations surrounding the future of college football have not slowed down, at all. Mohns, Garretson, and Richardson all took some time to dive into some of the topics that have been circulating since this announcement, starting with their initial reactions to the news.

Mohns – It was definitely a surprise. I think it’s a sign of what’s coming, which is probably everything shifting to two or three major power conferences. You know, it really is it’s all about TV deals and, and the share of the money. It’s a bummer because I grew up with my dad coaching at Arizona State, and grew up in Arizona, and grew up watching Pac-10 and Pac-12 games, you want it to be relevant.

Garretson – They went about their business and didn’t let anybody know, which in today’s world is near impossible or rare to not let anything leak out. I mean, I don’t think it takes a rocket scientist to figure out they want the LA market and then that throws all the other Pac-12 schools into a tailwind. I think it will have an impact on recruiting, and it will definitely help UCLA and USC recruit in southern California because they’ve been struggling with that. They can’t get their own guys in their own backyard.

All three coaches were in agreement that an elite TV deal would play a major role in keeping the Pac-12 intact and continue to attract recruits from the west coast. Many high school football players in Arizona are drawn to the Pac-12 because of the proximity to home and easier access for the families to watch them play in person. However, when their families cannot travel to a game the Pac-12 Network makes it difficult for family and friends to watch games from the comfort of their homes because of the combination of late-night games and inaccessible streaming services.

Mohns – Obviously, with USC and UCLA and the media market in LA, they’re trying to get as big of a piece of the pie as possible. I think that the Big 10 package, with their new TV deal, is pretty elite. They’re both going to benefit financially greatly from it. I think it’s just going to be that it’s like the tip of the iceberg of what’s probably going to happen over the next two or three years, or maybe sooner. I think something has to happen, to get themselves in line with an ESPN-type deal, to bring some more attention to the conference. I think as things are right now, I either haven’t been able to watch or I have to stream games if I want to watch one of my players that’s in the Pac-12. Unless they’re playing on a national game. It’s hard to watch the teams play and these kids know that.

Eric Richardson – I think the worst thing that ASU could have done was give their blinding endorsement to the Pac-12. From an economic standpoint, from the get-go, I think their commissioner wasn’t really on board with the sign of the times and how conferences were being built to TV contracts. And they had that lame PAC-12 Network that nobody had access to. A lot of these kids’ parents can’t afford to travel all the way to see their kid play against Michigan, Ohio State, Iowa, and all of that . . . but if you have a legitimate network where I can sit at home, and maybe for a marginal fee, I can still see my child play then that’s legitimate. Whereas if you’re in the Pac-12, it doesn’t matter what you do, if you don’t have the right server and all of that kind of stuff, you don’t get to see your kid play whether you can afford to see him or not.

As head football coaches of two of the top programs in State 48, Mohns and Garretson shared how the constant changes in college football have played a role in the way they coach. At surface level it may not seem like the Pac-12 split would have any impact on high school football coaches but it does mean that they have to keep up with the news enough to be able to translate that information to young players looking to get recruited.

Mohns – It’s really just been kind of learning on the fly with everything kind of shaken up and thrown on its’ head. First, we had COVID,  then the extra COVID year, and then the immediate eligibility in the transfer portal, and then the NIL’s in our conversations . . . it’s really changing the landscape of college football, and it really has changed the landscape of recruiting and opportunities coming out of high school. I think right now, with younger players, it’s just educating them on what’s happening. Especially as a head coach, my goal is not to tell players what to do or where to go, it’s really just to try to give them all the tools to help them make the best decision for them.

Garretson – We’ve always been telling our kids the same. We tell our kids to go to a place where when you walk into the facility, they’re really happy you’re there. That doesn’t have anything to do with a conference, that staff is happy and elated to see you in their weight room, in their stadium, in their indoor facility and practicing.

While both Garretson and Mohns don’t believe the Pac-12 split will cause too much of a ripple in recruitment for Arizona high school prospects, they have considered the geographical issues that may come into play. Similar to their thoughts on the importance of a good TV deal, they understand that there is an appeal to playing football on national television. Mohns doesn’t believe top-tier recruits will be greatly impacted by this split but the split may actually help second-tier athletes stay closer to home.

Mohns – When you look at TV and the national exposure, the best of the best is really in two conferences right now. Kind of being on the outside of that, it’s definitely something that I think should be a concern for the Pac-12 schools that are remaining, as far as their ability to attract the elite talent to come play in a conference where they legitimately cannot say that they have an equal opportunity for exposure for these kids. We’ve seen a lot of kids stay in the Pac-12, closer to home, so the family can come to see them. But then there’s the added benefit of okay, if they’re in the Big 10, they’re probably going to be playing on national television. That means their families will get to watch, then you think, gee, is geography going to play more or less of a role down the line if things continue moving in this direction?

Mohns – The NIL is not really a factor for probably three-quarters of the kids coming out of high school it’s more the blue-chip, four-star or five-star prospect. Obviously the more and more exposure, the more eyes on you, the more marketable you are. That’s what these NIL deals are all about and it’s gonna continue to change the landscape which is already rapidly evolving.

It’s fun to think in hypotheticals at a time like this. For Garretson and Richardson, the priority in their eyes is to preserve rivalries regardless of restructuring. Garretson also said he wouldn’t be surprised to see college football completely separate itself from other sports in order to not complicate competition among other athletics. However, as the college football landscape continues to evolve, the conversation around College Football Playoff expansion has become more prominent.

Mohns – I would love to see at least an eight-team College Football Playoff.  I don’t love the fact of having everybody in two conferences and I think in five or 10 years from now we’re all going to miss the days when we had conferences that were more regional. So I just hope that we can make some sort of regional scheduling and regional play and that this thing doesn’t just totally blow up college football and make it more like a pro sport than a college sport. I think with everything happening right now, that’s, that’s a little bit of a concern.

Eric Richardson –  I like the 12 to 16-team format. To me, they’ve always put emphasis on the top four teams, so fine, let’s take those top four teams and keep them as the top four and give them a bye the first week. Then take the next eight teams and seed them like you seed them and they play into those next four. I think that’s the most legitimate format. And from an economic standpoint, you stand to make millions of dollars by including more people in the party. I was honestly shocked to see that the NCAA just kind of tabled that and threw it away like that.