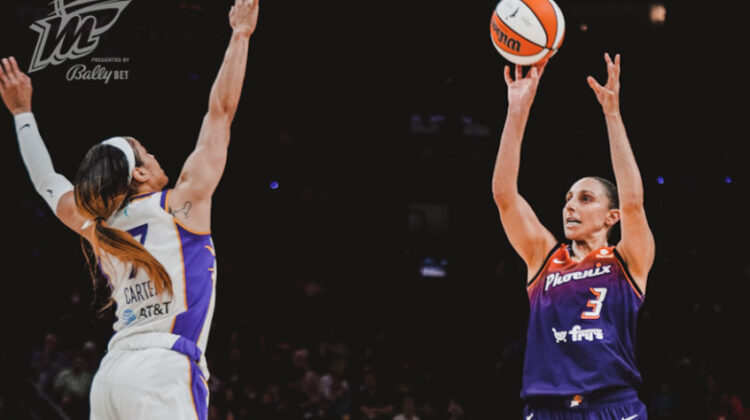 If you were looking for a team that gives up easily, then you won’t find it in the desert.

The Mercury is surging at the right time.

After defeating the Sparks 90-80 and both the Atlanta Dream and Dallas Wings losing on Thursday night, Phoenix has jumped from ninth to sixth place.

Even though it’s been a season full of stories on and off the court, all that matters is that the Mercury sits at 13-16 and is in the playoff picture.

“I think we’re a second half team,” guard Shey Peddy said. “We proved that last year and apparently, we’re doing it this year. We got good chemistry right now.”

While moving to a small ball style was a result of their roster construction once Tina Charles departed, it might’ve been the best thing to happen to Phoenix.

“I think it’s given us a lot of advantages where most people would think it’s a disadvantage,” guard Diana Taurasi said.

Call it finding their identity, call it extra motivation, call it giving the group time to mesh – whatever you want to call it, something clicked for this squad since that roster adjustment.

Since switching to small ball, the Mercury is 7-7 as opposed to three games below .500 before making the change.

“We’ve evolved into what we are right now in the last couple weeks,” guard Diana Taurasi said. “When you think about a good team, it’s a team that moves the ball, that moves themselves, they’re active, and I think we’ve found that activity on both ends.”

The product on the floor has taken a noticeable leap, giving the fans a chance to see what head coach Vanessa Nygaard’s system looks like at its best.

“I am very happy with the transition our team made halfway through the season when we had to change everything,” head coach Vanessa Nygaard said. “A lot of buy-in. A lot of commitment…Our team’s really focused.”

It helps when your dynamic duo in Diana Taurasi and Skylar Diggins-Smith have combined for 120 points, 21 assists, and 24 rebounds on about 51% shooting together in the last two games.

Taurasi also became the first WNBA player ever to score 30 points at age 40 or older.

“Sky and Dee – they’re probably the most experienced guard combo in the league,” Nygaard said. “They know what it takes in those moments…we lean on those experienced players to help us.”

They’ve had the help they’ve needed as of late.

Phoenix’s role players have been doing just that – playing their roles.

“I gave her [Cunningham] a nickname like two weeks ago and she’s starting to live up to it,” Taurasi said. “Baby Penny. That’s what Penny used to do at the four…Sophie’s getting there.”

The Mercury was 3-1 in this latest homestand as the squad looks to carry its momentum on the road against New York on Sunday.