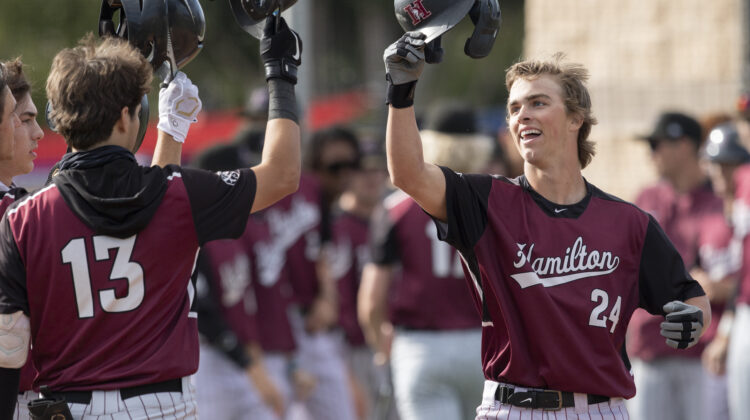 “He was around maybe ten,” Jason Turley said. “He hit like twenty home runs that year, and somebody claimed that he was hitting with a juiced, so he said, ‘Well then you guys pick the bat for me. I don’t care.’ They picked a bat that was just like this little, skinny, piece of crap bat, and he went up the next time, he hit a home run with the bat. It was funny cause the kids were screaming, ‘it’s not the bat.’ 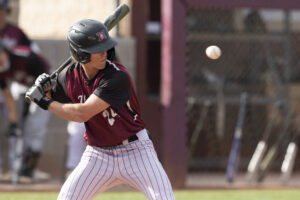 Gavin Turley, the No. 1 ranked Arizona high school baseball player in the 2022 class and, according to The Athletic, the No. 87 2022 MLB Draft Prospect, has always stood out on the field. In the 2021-2022 season at Hamilton, he batted .317 with 32 hits and 31 RBIs. He broke the state’s homerun record totaling 15 over the season. Since he was young, Gavin has made an impression on the diamond.
Growing up the son of minor leaguer Jason Turley, Gavin had the pressure put on him early, but it didn’t come from his dad. It came from his raw talent. “We would always have parents on our team or other teams commenting on him when he was very, very little saying, ‘Oh, that kids got something special or ‘Wow, I’ve never seen a kid hit like that,’” Jason said.
Gavin started playing baseball when he was around six or seven years old, and through most of his life, he played up with his older brother. Noah Turley is currently a first baseman at the University of Arizona who is also trying to make it to the show. “To watch them be able to do something they’ve worked really hard on, that they love and that I’ve been through as well has been really exciting,” Jason said.
Despite his talent, Gavin completely stepped away from the diamond at eleven years old. “He was able to take a step away from the intensity,” Jason said. “They go through this, and they are just playing and playing, and then they get burnt out, and they think that some little things like winning a trophy or a ring that are so important as opposed to development. Gavin was doing really well. He was a great kid and was playing like a year or two above his age group and doing well, and I noticed that he was on the road to either getting burned out or just not loving it or just like thinking that somethings are too important. I actually think when the spool is wound too tight, it actually hinders your development. I think him stepping away in the long run was a really critical step in him being the player that he is today.” 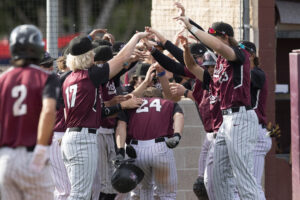 Growing up, Gavin and his family of seven lived in Midway, Utah, a town with a population of 5,210. Baseball isn’t that competitive in Utah and that kept Gavin from playing traditional high school baseball. Instead, he would work out in the winter and spring and travel around the West Coast playing club ball during the summers. “I was able to focus on myself and make more progress than the average high school kid because I was working while they were playing,” Gavin said.
Regardless of not having played his first two seasons in high school, Gavin was a highly sought-after college recruit. After getting offers from schools all over the country, Gavin committed to Oregon State his freshman year. “It was my dream school ever since I was little,” Gavin explained. “They were just coming off a National Championship and the coaches are phenomenal.”
In 2021, the family moved to Chandler, Arizona, following a career move for Jason. It benefited Gavin but was an adjustment for him. He went from living in a small town with one stoplight to a neighborhood of 257,076. Then he went from no high school baseball to one of the top ten programs in the country – Hamilton.
In the 2021-2022 season, the Huskies won the 6A State Championships, where Gavin hit a two-run shot and helped his team run-rule Chandler 11-1. “That was a moment I was really proud for him, and I’m glad he was able to have that happen,” Jason Turley said.
Jason and Kristin Turley are constantly proud of Gavin for his maturity and responsibility off the field. Gavin has noticed that his maturity makes him stand out from other top prospects. He’s very detailed oriented, structured and routine-driven. “He looked into the last three draft classes at the first three rounds, and he found all their metrics,” Jason explained. “Then, he averaged them out and put them on a board of his room and said to himself, ‘If I wanted to be a first, second or third-rounder, then I can’t just be in love with myself. I have to be honest with myself, and if I’m not running as fast as they are or throwing as hard as they are, then there’s no way I’m getting drafted in those rounds.’”
Gavin has the mind of a problem solver. He taught himself to play piano, solve a Rubik’s Cube in roughly thirty seconds and even fly a plane. He was on a trip in Montana, saw a dad flying a plane, and thought to himself, “I want to be that guy when I’m older.” After the trip, he registered to learn to fly a plane and now does it as an escape from his everyday life. “Being up in the air, you have to focus on what you are doing because it’s life or death up there.”
For now, Gavin is focused on getting to the show and working towards his goals. “I see myself doing what I love to do and that is play baseball.”