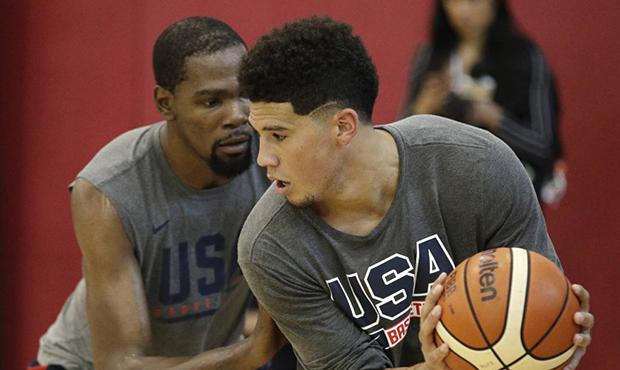 Kevin Durant broke the sports world and media landscape yesterday, after he reportedly requested a trade from the Brooklyn Nets. His most desired destinations are the Miami Heat and the Phoenix Suns (both were the top seeds in their respective conferences in 2021).

Phoenix and Miami are among two of the teams that Kevin Durant has on his wish list, sources tell ESPN, but the Nets plan to move Durant where they can get the best possible deal. With four years on his contract, there's no shortage of teams willing to unload assets for Durant.

The ability of Durant is unquestioned. He’s one of THE greatest scorers (if not the best) in league history. The 33-year-old forward also has four years remaining on his current deal. It should also be noted that Brooklyn has all the leverage and can send Durant wherever they get the best deal for their franchise.

Despite all of that, the question remains: Would Durant bring the first title to the valley if James Jones and the Suns make a deal for him?

The Nets assumed Durant would deliver a title. They were so certain in fact, that they went ahead and gouged their young core, in order to get Durant some help in the form of Kyrie Irving and James Harden. Those youthful players made the postseason before Durant came to play (2018-19) and the season when he signed, but didn’t play while recovering from an Achilles injury (2019-20). With Irving being limited in games played in 2021-22 due to vaccination status and injury, plus Durant also being banged up, the Nets never stood a chance in the Eastern Conference. Now Brooklyn is likely heading for a brutal rebuild with less young talent left, as Harden was traded for Ben Simmons during the 2021 season, and Irving is likely to be dealt. The right trade could put them on the right path, but draft picks and young players are not guaranteed to succeed.

The Suns wouldn’t be gutted in the same way that Brooklyn was since they’d only be acquiring one superstar with two already in tow, but depth would become an issue.

There are many rumored trades. Chris Paul and Devin Booker are off the table. A deal starting with Deandre Ayton (sign-and-trade) and Mikal Bridges would likely have to happen. Cam Johnson, Jae Crowder, Landry Shamet, Dario Saric, and plenty of draft picks could be involved too. The Nets aren’t interested in Ayton on a max deal (reportedly), so a third team would likely have to enter the fold, which would mean more draft picks would be swapped or sent away.

Any Phoenix trade for Kevin Durant would very likely center around the maximum four first-round picks allowed and the Nets ability to swap picks with the Suns in several other years.

A big three of Paul, Booker and Durant would be a heavy favorite to win the west. They’d have to play the market and find the right veterans who will play for cheap with the hope of winning a ring in order to fill out the roster.

IF Bridges is somehow not in the deal, then Phoenix is in the PERFECT position. He would cover all of the defensive holes this team would have and take pressure off all three stars. It’s not likley, but there are r̶e̶p̶o̶r̶t̶s̶ rumors that Phoenix is doing anything they can to keep him.

The Suns will do everything possible to keep Mikal Bridges! Can confirm from trusted source there is a strong possibility that this could get done while keeping Young Scottie aka Mikal Bridges with Big 3 of Devin Booker, Kevin Durant & CP3! Again no guarantees but very possible👀

Using the Jazz as a third team in a Kevin Durant/Deandre Ayton sign-and-trade is tough. Not sure what Utah has to offer aside from that new draft pick haul, since Gobert's gone and Donovan Mitchell wouldn't be included. Maybe picks is enough, but the math is tricky

The storyline of Durant going on a quest to top the Warriors and possibly LeBron would be enticing to follow all season long.

The downside is that an injury to ANY of the three could almost immediately end hopes of a finals run. But even with depth, we’ve seen injuries effect this roster. Playoff time usually equals seven or eight man rotations, so depth is less important on the largest stage when a team is healthy.

The argument for staying with the status quo is that Brooklyn may be a cautionary tale for the Suns (reasons listed above).

The past two seasons were some of the best in franchise history. An injury to Dario Saric in the 2021 Finals likely cost them a first title. A weird round with the Dallas Mavericks (with Paul possibly banged up) swept away the success of a 64 win campaign. Yes those are both excuses, but excuses do hold some weight. Who’s to say that keeping most of the roster the same won’t work?

Now running it back is more difficult after one day of free agency. JaVale McGee reportedly inked a deal with Dallas for three years and upwards of $20 million. Most other quality backup center options are off the board as well.

Ayton is supposedly being shopped around as an asset in a trade for Durant, but it’s likely that he stays now if a deal doesn’t come to fruition. Will he be upset at how things transpired, or would he be okay knowing that he still gets a max deal despite the Suns’ original hesitancy to offer that? Business is business after all.

If Ayton stays, Bismack Biyombo should be resigned and they could add a third center (Dwight Howard and Hassan Whiteside could be low risk-medium reward candidates).

One weakness that exposed the Suns in the postseason was a lack of reliable point guard depth behind CP3. There are still a few veteran options available like Rajon Rondo, Austin Rivers, Goran Dragic (someone say reunion?), and Raul Neto. Surely one of them could provide SOME consistency off the bench.

Signing Ayton, a pair of backup centers, and a backup ball handler would need to be the top priorities if this is the route Phoenix takes. Bridges and Johnson would also need to take another leap in their development, which they will likely do.

The other benefit of keeping the crew the same is the comraderie that the fans love and the team hypes up would still be there. That chemistry is an important part of the winning formula.

Phoenix is not in a bad position either way. However, the Suns SHOULD trade for Durant, but they’ll have to win a title to justify the move. It can be scary to move young players who are just scratching the surface, but just one championship makes it worthwhile (look at the Lakers trading most of the roster and picks to acquire Anthony Davis). Look at the Boston Celtics too, who have drafted and developed a strong core, but haven’t pulled the trigger on a bonafide superstar to play alongside Jayson Tatum. Yes they got to a Finals too, but as longtime Suns fans should know, there’s no guarantee of getting back after one appearance with a young team.

The NBA is a star-driven league. Having lots of good players on your team doesn’t normally equate to winning titles if you don’t have the star power to shine in the biggest moments (again, look at Boston).

Paul is 37-years-old so the window is tight. Let’s say CP3 plays two more years and Phoenix wins a title. There would then be two years with Durant (35) and Booker (27) for Jones and the front office to build around with veteran pieces to possibly compete for a second (or first if they don’t win one the first two years). Also, it’s totally possible that Paul plays until the end of his contract (2024-25). Having Durant would allow him to slide into a the third option role (or fourth if Bridges stays) over the course of the next few seasons. That would likley allow him to stay healthy come playoff time, which isn’t always the case with him.

If the Suns don’t win a title in that period, then it’ll be easy for fans to blame Jones and the rest of the front office. But, the gamble is one that could pay off and give the city of Phoenix what it desperately wants: a championship to call its own.