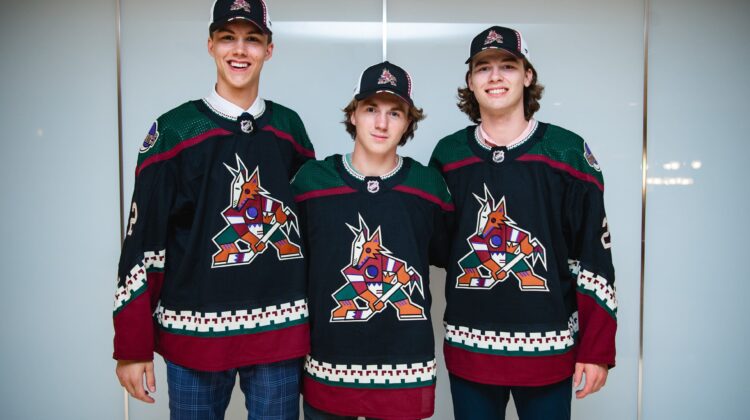 In a night that started with the Coyotes having seven overall picks in the 2022 NHL Draft turned into a wild night of trades that landed Arizona the 11th and 29th picks in addition to the number three overall selection.

He’s the highest Pennsylvania-born player ever selected, according to ESPN.

“Arizona’s a spot I wanted to go to,” Cooley said. “I know they have such a bright future with Keller, future draft picks, draft picks they’ve had in the past. They’re heading in the right direction and I’m super happy to be a part of it.”

He’s also excited about the franchise’s move to Tempe.

“Adding the college atmosphere to an NHL rink is special,” Cooley said.

The 5-foot-10, 170 pounder was ranked in the top two of North American skaters by NHL Central Scouting.

He totaled 31-58-89 in 70 games on the NTDP’s Under-18 team and mentioned Patrick Kane as someone he models his game after.

Picking at the three spot was expected, but picking at number 11 was not.

The Yotes traded their 27th, 34th, and 45th picks to San Jose to move up in the draft and take forward Conor Geekie with the 11th selection.

“I’m a fan of hockey, so any trades, anything cool like that, it’s a cool experience,” Geekie said. “Getting my named called was pretty special. My heart skipped a few beats.”

Standing at 6-foot-3 and nearly 200 pounds, Geekie ranked sixth with 70 points, while his goals and assists totals ranked 10th and fifth, among NHL Central Scouting’s ranked prospects from the WHL.

General Manager Bill Armstrong and his staff weren’t done yet.

They traded up again, this time getting a haul from Edmonton in exchange for the 32nd pick of the draft.

With that 29th pick, the Coyotes took defenseman Maveric Lamoureux.

“You’re not gonna see a lot of 6-7 defensemen who have a mean streak like me,” Lamoureux said. “They wanted to see me as a person…Always with my big smile and have good energy. That’s something they liked about me, I think.”

According to the Coyotes, he quadrupled his goals total and more than tripled his assists and points totals from 2020-21 to 2021-22 in the QMJHL.

“They’re good players, people just have them in different orders,” Armstrong said. “Sometimes you take what your team needs, and we really like what we got.”

Rounds two through seven of the NHL Draft will get going Friday morning at 8 o’clock.