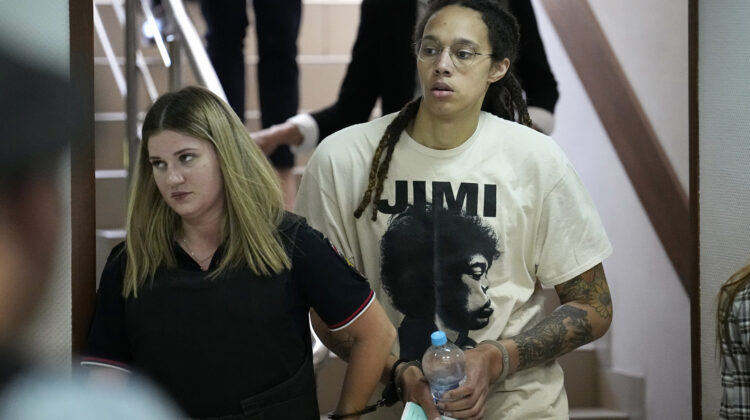 Sporting a Jimi Hendrix T-Shirt, the 31-year-old’s handcuffed hands led her into the courtroom.

She was arrested at Moscow’s Sheremetyevo International Airport over four and a half months ago for allegedly being in possession of hashish, or cannabis, oil.

She’s facing a potential sentence of up to 10 years if she’s convicted of the drug trafficking charges.

“Her trial going forward – we hope that’s progress,” Phoenix Mercury head coach Vanessa Nygaard said. “It’s always great that we get to see an image of her. It’s also heartbreaking to see images of her.”

From what was gathered regarding what went on inside the courtroom, state-owned TASS news agency reported that Griner said that she understood the charges against her.

According to Mediazona, an independent news site, Griner was then asked by the judge if she wanted to enter a plea, she responded, “At this moment, no, your honor. At a later date.”

One witness questioned by prosecution was an airport customs official who spoke in open court. Another witness was unidentified and spoke in a closed session, according to state news agency RIA-Novosti.

It was then reported that the judge adjourned the trial until July 7 when two other witnesses did not show up.

Dragging a case like this along is not uncommon in Russian court and should be anticipated as the process continues.

Alexander Boykov, an attorney for Griner, said it was too early to comment “on the specifics of the case and on the charges.”

Boykov also told RIA-Novosti that Griner has been exercising and taking walks in the detention area.

At a closed-door preliminary hearing on Monday, Griner’s detention was extended until December 20 – another six months.

Potentially another six months, at least, without her wife, Cherelle, by her side.

Even as she’s going through this unimaginable experience, Brittney has done her best to be there for Cherelle.

“Because I’m her person she will always try and write persuasively to make sure I don’t break,” Cherelle said. “She knows I’m studying for my bar and she knows I have all these things going on and she’s trying to always be my strong person.”

Brittney has also told Cherelle that she’s “hardened” and is not “on her knee right now.”

While she’ll need time after she gets home to get back to herself, Brittney wrote to Cherelle in a letter: “I’m holding on and I won’t break until I come home.”

For now, Cherelle’s next short term goal is to meet with President Biden in order to have a face-to-face discussion regarding her wife’s detainment in Russia.

As support for Griner continues to mount, some have suggested that Griner could end up being traded along with Paul Whelan, a former Marine serving a 16-year sentence on an espionage conviction that the U.S. has called a setup.

“We’re keeping her and her family in our thoughts and prayers,” Nygaard said. “Extremely hopeful that President Biden and the Biden Administration will do everything they can to bring her home as quickly as possible.”

Based on known information about Russian court proceedings and today’s preview of what’s to come, we should expect this trial’s hindrance to continue.