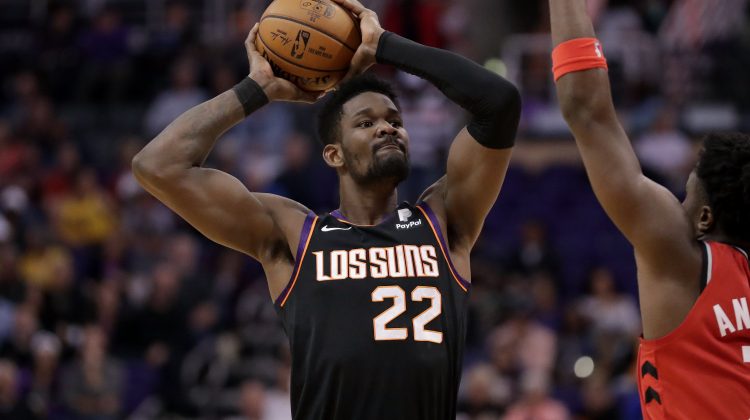 Phoenix Suns center Deandre Ayton (22) against the Toronto Raptors during the second half of an NBA basketball game Tuesday, March 3, 2020, in Phoenix. The Raptors won 123-114. (AP Photo/Matt York)

Deandre Ayton has agreed to a four-year, $133 million max offer sheet with the Indiana Pacers, who have been in pursuit of Ayton for much of free agency.

ESPN’s Adrian Wojnarowski’s report is based on information told to him directly from Ayton’s agents.

With DA being a restricted free agent, the Phoenix Suns have 48 hours to match “the largest offer sheet in NBA history.”

NBA free agency is always a frenzy, but this year was taken to another level when superstar Kevin Durant requested a trade from the Brooklyn Nets, and his top preferred destination was Phoenix.

Specifically, to play alongside Devin Booker.

That’s where discussions led to the possibility of a sign-and-trade between the Nets & the Suns centered around Ayton (plus quality role players and picks) & Durant.

Another development was the Pacers trading guard Malcolm Brogdon to the Celtics in order to clear up cap space, making their intentions known that they were targeting Ayton.

With Durant trade talks stalling out, the Brogdon trade official, and Indiana having the money to bring him in – Ayton agreed to the historic deal.

According to ESPN front office expert Bobby Marks, if Phoenix matches, Ayton ‘has veto power on any trade after Jan. 15. He cannot be traded to Indiana.’

Ayton has veto power on a trade for a full year if Suns do match.

Phoenix has the next 48 hours to match the offer and run it back; clock starts at midnight.

Either way, this is a franchise-defining decision for majority-owner Robert Sarver and the Suns.