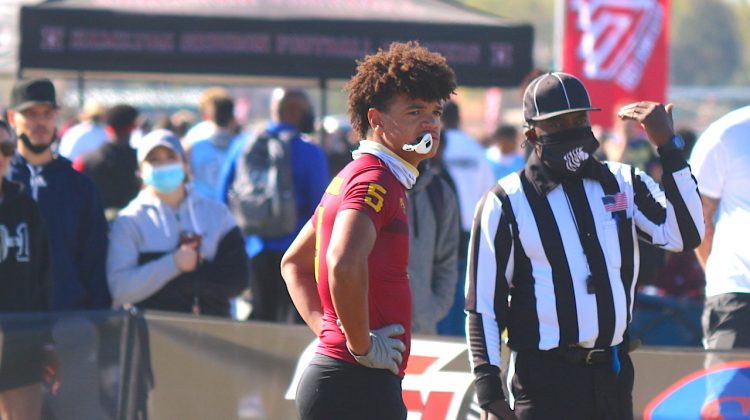 “My first run was a 4.58 and that was the fastest I ever ran it until I did it the second time and ran a 4.47 and surprised everyone, even myself,” Lockhart said.

Ran a 4.47 at the Ohio State camp yesterday ! 😏 pic.twitter.com/5NvBbLty7F

Miles first impressed the Ohio State University coaching staff through his film but believes he sealed the deal through his performance at camp. He was blown away by the Buckeys and says the university exceeded his expectations during his visit. Through continued contact with the coaching staff, Miles is confident he would be able to play a big role in Ohio State’s winning culture.

“Their corners are usually a little taller but I think I bring the exact skills that they have,” Miles said. “I have the speed, I’m smart, and I know I can go up and get the ball as well.”

Ohio State has been recruiting more and more throughout the state of Arizona which holds some weight with Lockhart as he continues to explore his options to play at the next level. Lockhart had plans to meet up with former Chandler wide receiver Kyion Grayes later on in his visit but ran into him early in the day in the locker room. According to Miles, Grayes immediately took him under his wing and showed him around the facilities, the university, and even his apartment – all to give him a true sense of what the school has to offer.

“Also seeing Denzel Burke (Saguaro) going there and actually starting as a freshman and being a freshman All-American, that holds a lot of weight with me,” Lockhart said. “It shows they recruit out of this area and they’ll go there and thrive in that environment.”

Miles has also recently visited BYU and the University of Utah, both of which he found impressive. He has a visit lined up at Northwestern next month, a program that is also recruiting heavily throughout Arizona. Miles is looking forward to his visit to Northwestern because their roster would also include a flood of familiar faces. Saguaro cornerback Cole Shivers told Miles while he was taking his visit to Northwestern, coaches were talking about Miles as well.

“That means a lot to me because if they’re talking about me when I’m not even there, that must mean they’re really interested,” Lockhart said. “Seeing a lot of Arizona guys go through there is very nice.”

As Miles continues exploring his options he’s been calling two of his cousins who play college football every week to give him guidance.

The 6-foot-4, 285-pound offensive lineman holds one offer from the University of Arizona but has wasted no time this summer getting his name out there. Sa’Kylee says he’s been focussing on getting noticed at camps and building his relationships with his teammates at Canyon Del Oro.

Woodward has been to two camps this summer, at UCLA and ASU. Both of which he said he put his best foot forward and is confident he was able to get the attention of coaches.

“I’ve been balling!” Woodward said. “Of course, the coaches were impressed which is all I could wish for.

Sa’Kylee is making a visit to USC on June 25 and hopes to leave with an offer.

“USC is my dream school and I’d do everything in my power to have an opportunity to play there,” Woodward said.

The 6-foot-4, 280-pound offensive lineman has made an appearance at two camps this month. The first was at UCLA and the second was at Cal-Berkeley.

“These camps have been extremely important for me to get my name out there,” Cordova said. “Just being in front of coaches and working on getting exposure and give them a chance to see how I move in person is a huge thing for me in the recruiting process right now.”

The visit that has stood out to Luis the most this summer was his visit to San Jose State the first week in June. Luis said as soon as he arrived on campus he had the opportunity to chat with the O-line coach and many of the players while they were lifting. He said that it took no time for him to warm up to the group and mesh with the players.

“There was a group of o-lineman that were lifting and they were cracking jokes with me and talking,” Luis said.

Luis is pitching himself as a hardworking two-way player that’s willing to fill in a gap wherever he’s needed. He received an offer from the University of Arizona in June of last year. He’s excited about the potential to stay close to home and play for the Wildcats but is looking forward to exploring more options heading into his junior season.

“They’ve kept in close contact with me and I’d absolutely love to stay at home,” Luis said. “As far as recruiting goes I just want to keep trying to get my name out there, show the coaches what I can do and just continue to improve.”

The Brophy College Prep wide receiver has received a handful of offers over the past few months, including – NAU, Montana State, University of Northern Colorado, and the University of North Dakota. Recently Layton made the short trip up to Flagstaff to meet with the coaches and checkout the school.

Thank you @coachJTaylor8 for the great hospitality I was shown today. Loved the campus and the new facilities up at NAU!🪓 pic.twitter.com/BG9wzLKWOv

“I was pretty excited to earn an offer from NAU, and I like their interest in in-state recruiting,” Layton said. “I am friends with several of the guys that are already on the roster and it would be cool to play with them in the future.”

Layton said he enjoyed meeting with Junior Taylor, the wide receivers coach and felt they meshed well. Layton doesn’t have any other visits lined up for the summer and is taking the next few months to focus on building chemistry with his fellow Broncos and get ready for the upcoming season.

“My dad played a huge role in my life especially in the football world,” Currie said. “All I want to do is make him proud and I appreciate NAU for giving me a chance.”

Myseth said it was important for him to stay close to home where his family would easily be able to watch him play and support him. From the get-go, NAU felt like the perfect fit for Currie and he said it was clear that the coaches believe in what he has to offer.