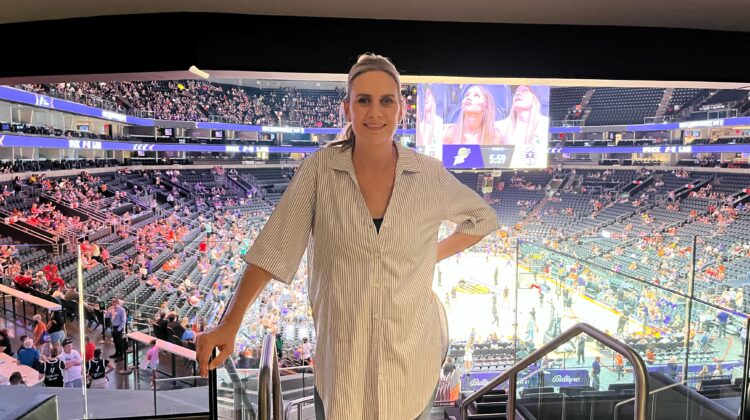 Penny Taylor doesn’t need to be in the driver’s seat.

She’s one of the great wingmen in women’s basketball – with Diana Taurasi on three Phoenix Mercury WNBA championship teams and more broadly in life and Lauren Jackson for their native Australia at the Olympics and World Championships.

Not that Taylor isn’t comfortable behind the wheel too. She was Most Valuable Player at the 2006 World Championships, when Australia broke through to win its first and still only major international gold medal. In a professional career that began when she was only 17, Taylor often was the go-to player whether at home in the WNBL, Italy, Russia, Turkey or China.

“You have to be the man in Europe,” Taylor says. “You have to score a lot of points and you were responsible for whether a team won or lost. I liked that too.

“My goal was always to try to be good all the time and not have those up and down (seasons). It was always about doing my job consistently. Then I got to play with Diana so I never needed to be the main person. I never had all the attention on me. I got to fly under the radar and do my thing, be aggressive and be competitive, yet she had all the pressure.”

Taylor’s 19-year, best-of-both-worlds career carried her far beyond what she could have imagined growing up in suburban Melbourne and now into the Women’s Basketball Hall of Fame.

She is part of an eight-person induction class that includes Becky Hammon and DeLisha Milton-Jones. The ceremony is Saturday in Knoxville, Tennessee, with Taylor joining Michele Timms (2008 inductee) and Jackson (2021) as Australian Hall of Famers.

Taurasi, who turns 40 Saturday, will be in attendance, taking a red-eye flight after the Mercury’s home game Friday. She and Taylor married in 2017 and are parents of two, 4-year-old Leo and Isla, born during the 2021 WNBA playoffs.

“When she got the phone call, she goes, is this a big deal?” says Taurasi, whose own Hall of Fame turn is a certainty once she is the required three years past her playing retirement.

Taylor allows, “To be honest, it’s not something I ever thought of. It’s very special because I’m in a country that isn’t my own and they value what I did. When you look at the list of people in it, it feels very surreal in a way that you’re in a list with those people. I feel like Australians have a lot of respect in the basketball world so for me to be able to continue that lineage of respect that they’ve earned is special to me as well.”

‘Smile then break your face’

Ankle and knee surgeries in 2009 and 2012 took an ongoing toll although in 2014 she was integral to the Mercury’s greatest team and made the All-Star Five at the World Championships, when Australia won a bronze medal.

Only Taurasi and Taylor played on all three Mercury title teams, peaking with a 29-5 regular season record and 7-1 playoff run in 2014. It was further back for Taurasi that 6-1 Taylor “kind of changed the way the game was played.

“When (Paul) Westhead came here (2006-07), he said Penny is going to play the 4 (power forward). It really changed the way the game looked. She was the first stretch 4 if you think about it.

“She was just a competitor. Anyone who’s played with Penny and against Penny knows she’ll smile then she’ll try to break your face. To go with that, she was just so skilled. Once again, I think she changed the game with the way she drove to the basket. They always talk about Manu (Ginobili) on the men’s side. I think Penny brought that to the WNBA where no one had really seen that before.”

Taylor’s WNBA career didn’t begin in Phoenix although now few recall her three seasons with the Cleveland Rockers. She was No. 11 overall pick in the 2001 draft. In 2003, the Rockers lost 2-1 in the playoffs first round to eventual champion Detroit only for the franchise, a WNBA original, to fold when a new owner was not found.

The Mercury, coming off a league worst 8-26 record in 2003, altered their future and that of the two women in 2004, taking Taylor No. 1 overall in a dispersal draft then Taurasi No. 1 overall out of University of Connecticut in the regular draft. Add in Brittney Griner, drafted No. 1 overall in 2013, and the Mercury are more often than not a WNBA top-four finisher.

I’m forever grateful to (then Mercury general manger) Seth Sulka for choosing me to come here,” Taylor says. “Not only because now it’s my home. We won, we had some great times. God who knows where I could have ended up. I appreciate that he valued what I did, and I feel like it all worked out.”

Michael Taylor and Denna Noble were both English.

Michael’s father, a scientist, sailed to Australia with his family for a job in the Sixties.

“I grew up in a very hilly bushland environment (in Mount Waverley, outside Melbourne). We were always outside as little kids. That was a natural progression to going into sports. I don’t really remember a time when I didn’t play basketball (she started organized play at 4). It just kind of snowballed.”

Phil Brown recruited Taylor to train and play for the Australia Institute of Sport, a natural progression she says even though it required a 400-mile move to Canberra at age 14.

“I was very driven and that to me was the next step,” Taylor says. “I didn’t think too much about it. It was just obviously the next step. I don’t even think in this day and age you could do it anymore, nor maybe should you. But for us at that time, it was the exact right thing for me to do.”

By 1997, Taylor was playing in the WNBL, first for AIS then to start her pro career for the Dandenong Rangers. She was WNBL Most Valuable Player in 2000-01 and by then ready to expand her basketball horizon to the U.S. and Europe.

“There were times where she was the best player in the world, hands down,” Taurasi says. “She was (World Championships) MVP in 2006, and that was the stretch where there was really no one who could match up with her. You put a guard on her, too small. You put a post on her, she’d go by them.”

Seattle Storm guard Sue Bird also remembers Taylor as a “match-up nightmare. The style in which she played, how strong she was, her ability to get into the paint and draw contact and hit the 3 from the outside.

“There was also a mental toughness there. She was always the difference maker for Phoenix. There was a period of time where they won then she came late or was injured and they didn’t win. Then she comes back, they win. There’s a common denominator, and that was Penny.”

Finding happily ever after

“The injuries came because of what I did and the way I played,” says Taylor, who still has knee cartilage issues today. “I sacrificed my body. I put a lot of my body on the line, and it was never going to last.”

What endures in Phoenix is the trio of titles and a relationship with Taurasi that she says has kept the WNBA career scoring leader still playing through some significant injuries.

“There’s always a foundation you think is maybe just friendship or you get along or you have great synergy, and it just turned into more than that (in 2009),” Taurasi says. “We’re friends and then we’re more than friends. Penny just really has a grounded way about herself, a very honest way about herself. I’m definitely the lucky one in the relationship.”

Taylor was married previously — to Brazilian volleyball player Rodrigo Gil in 2005 — for three years. But happily ever after doesn’t always materialize on the first try, and Taylor waited almost a decade until marrying Taurasi on the eve of the 2017 WNBA season.

“We’d always been great friends,” Taylor says. “How do you explain when you have a connection with someone? You just do or you don’t. I will say it was a little complicated with my (first) marriage, but it was something that we’d always had a connection and a great foundation of friendship to build on.”

Bird, one of Taurasi’s best friends going back to college, says: “I think for Dee, Penny has definitely brought a calming presence into her life. The ways they interact especially now as parents. It’s been really fun to see from a friend all the wonderful things Penny has brought to Dee’s life and vice versa I’m sure.”

Neither of Taylor’s parents lived long enough to share in Penny’s Hall of Fame achievement or to meet her children. Denna died of ovarian cancer in 2012 and Michael of lung cancer in 2014. But other family members are coming for the induction, and Penny and Diana spent two months in Australia after the 2021 WNBA season.

“You miss them near every day,” Taylor says of her parents. “But especially when you have kids and you not only need the help but you want to reflect on your own childhood and they’re not there. When did I walk, when did I talk, all those milestones you can’t ask about. Leo’s at an age where he asks where are your mom and your dad.

“Diana and I think about our families being the center of our universe. I’m really thankful we have that similar mindset and we get to go through this together.” 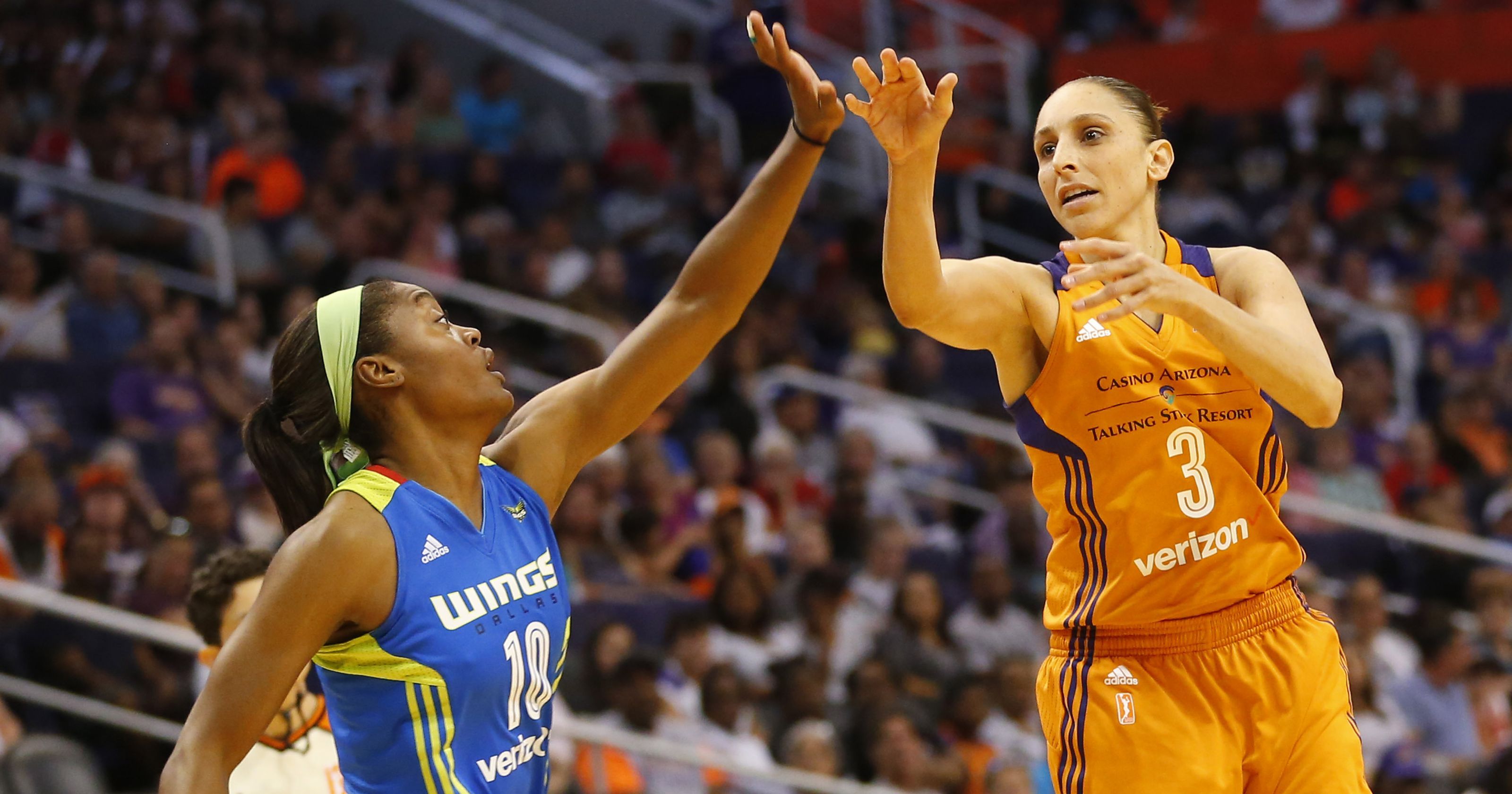 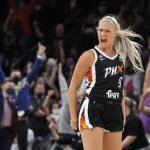 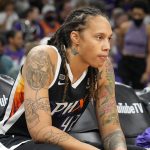 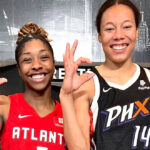