One of my chapters in broadcast life was the original radio play-by-play voice of the Phoenix Mercury. It was 1997. I fly around the country with Hall of Famers Cheryl Miller and Nancy Lieberman. I’m bumping around on buses with Michelle Timms(Timmsy), Jennifer Gillom(Grand-ma-ma), Bridget Pettis, and other terrific ladies. I was in that space in life where I was coaching my two daughters in basketball, so i’d pick the brains of the players and coaches at practices and trips. I often found myself sitting next to the players on planes conversing about family and hoops. There were times on the schedule where the Mighty Mercury would have a game in Cleveland and the next day in Charlotte. Unlike the NBA, we flew on low-fare airlines. If we were in a back-to-back, the second game was usually a loss. I could see and hear the wear and tear coming from the team.

Twenty-five years later, nothing has changed for the Mercury. They still travel commercial. At times, they still have to fly in on the day of the game when there’s a back-to-back.

Flying on the same day as the game will never sit well with me!
Back-to-back away games should never be scheduled, considering we fly commercial (with no security).
The W wants quality/high-level basketball, but doesn’t (seem to) value quality of life for the players 🧐

I am on the players’ side on this one…

Football season can’t get here soon enough. I’ve got a triple-header lined up to attend to start my season.

Friday September 2 Chandler high at Cathedral Catholic (Del Mar, Ca.) debut of the #1 QB prospect in the class of 2024 for the Wolves

Case Hatch(Perry) and Connor Soelle(Saguaro) are two high school football players who chose to stay home for college. They are essential cogs for the coming season at Arizona State. As many times through the years as I have pointed out the lack of commitment by Always Something University to recruit the top local talent, here are two players that they can hang their hats on to say “see, we recruit local “…

This will be an interesting week for Mr. Irrelevant, er, Brock Purdy. The former Perry high school star was the last pick in the recent NFL Draft and will be honored with various events in Orange County starting Monday. Here’s his itinerary. 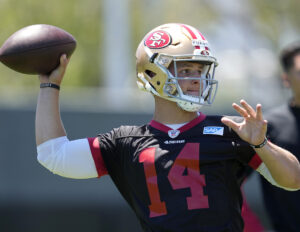 No better way to get to know the Back Bay and the ocean than paddling!

Enjoy a night of roasting and toasting to our new Mr. Irrelevant.

A new 49er will feel right at home at the iconic Knotts Berry Farm Theme Park!

Visiting the local pros for an evening at a different kind of ballpark.

Experience the studio like the pros with a special visit to NFL Network.

No visit to the peninsula is complete without a tour of the local brew stops!

The fun begins at Baja Sharkeez at 5:30 pm. Other locations include The Stag, and Mutt Lynch’s.

Learn a Newport staple with the pros! Newport Beach

Open to the public

Newport with the Junior Guards

Experience the ocean like the local lifeguards while having fun under the sun.

Nothing like sailing in a part of a Class-A, favorite local race!

Launched in 1976 by NFL alumnus Paul Salata, Irrelevant Week is the annual celebration recognized by the National Football League that honors the last player to be picked in the NFL Draft…

World Cup North America venues were announced this week, and Phoenix wasn’t even mentioned as a potential site. The pursuit of MLS feels like it’s hit a wall once again…

The Present and Future of QB’s in the Transfer Portal