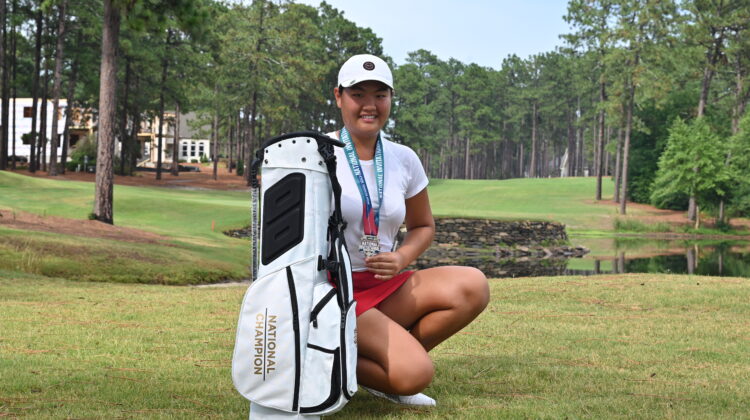 (Photo by Grant Halverson/PGA of America via Getty Images)

On the final day of the NHSGA High School Golf National Invitational, a sharpshooter from the valley put on one of the greatest clutch performances in the history of the National Invite.

Hamilton High School junior and 2021 AIA Girls Golf DI State Champion, Jennifer Seo, started the final day of the invitation-only, three-day competition in sixth place overall, two strokes behind the leader. On the final day of the invite, Seo put up the best round of any golfer in the tournament. Seo shot a magical five-under-par in the final 18 holes to soar past the competition and claim the national title by two strokes, finishing two-under 211 (73-71-67).

The Girls National Invitational began in 2019. The third iteration of the national event took place at the Pinehurst Resort in North Carolina, the host of the 2024 U.S. Open, on the No. 1, No. 6, and No. 9 courses. Invitations were based on state championship performance across the country.

The High School National Invitational is filled with some of the best high school golfers and state champions from across the country. Even though 223 entries represented 38 states in the National Invitational, the grounds of the Pinehurst were scorched by Arizona talent.

Seo had to overtake some familiar competition to claim the crown. On the final day of the tournament, Seo nearly went stroke for stroke with the 2020 AIA Girls Golf DI Champion, Liberty High School senior, Mattison Frick. Seo and Frick have battled down the fairways for a championship more than once in their high school careers. The duo not only finished first and second in this year’s National Invite, but they also finished 1-2 in the past two AIA State Golf Championships, including in a playoff finish in 2020.

Seo sunk 14 birdies and 30 holes at par through 54 holes while Frick tallied 12 birdies and 31 holes at par. Seo becomes the first Arizonan to win the Girls National Invite. Arizona won the girls invite as a team in 2020 when the Pinnacle Pioneers beat the field by six strokes.

Frick ended the invite one-under 213 (70-73-70) in second place. The Liberty senior also represented the state of Arizona in the team portion of the national invite alongside her teammates, Teaen Sweet, Annika Saida, Brooke McGlasson, and Kaitlin Anderson. Liberty High School qualified for the national invite by winning the 2021 AIA DI Girls Golf Team Championship and finished the national invite in fourth, 74-over 930 (312-309-309).

Ironwood Ridge High School from Tucson was also included in the National Invitational as the 2021 AIA DII Girls Golf Team Champions. IRHS placed tied for eighth in the team competition 101-over 957 (324, 316, 317).