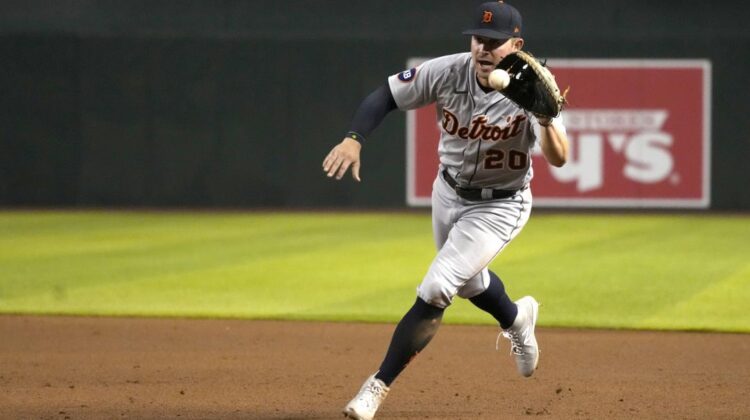 The number one overall pick in the 2020 MLB Draft made the most of his final game back in Arizona for the 2022 season.

Former Arizona State All-American, Spencer Torkelson, has soared through the minor league ranks and into the starting batting order this season for the Detroit Tigers. This weekend marked the former Sun Devil’s first trip to the valley as an MLB rookie.

While getting struck out three times on Sunday wasn’t the plan set out to defeat the Diamondbacks, Torkelson still made an impact on the game. The former Sun Devil doubled to center in his opening at-bat and was walked later in the contest and scored two of the Tigers’ seven runs. Detroit’s offense couldn’t keep up with the Dbacks in the series finale though, as Arizona avoided getting swept with an 11-7 victory. This was the Tigers’ only series against Arizona this season.

Torkelson started at first base for Detroit in Friday’s series opener against the Diamondbacks. The 22-year-old reached on a single in his first professional at-bat in the state of Arizona but didn’t record a hit in his final three at-bats. The California native was omitted from the starting order in the second game of the series on Saturday but returned to the five slot in the batting order in the series finale on Sunday.

“It’s very nice to be back here. I love Arizona. It’s pretty much my first home now,” Torkelson said to local media on Friday. “It’s kind of special because I kind of came onto the national scene here at ASU so to play in this ballpark this year, it’s really cool to be back here and I’m glad it could be in my first year.”

In his time as a Sun Devil, Torkelson was a two-time unanimous All-American. He is second in Sun Devil history in home runs, just two dingers shy of Bob Horner’s school record, and nearly broke the record until his final season was canceled due to the Coronavirus pandemic.

After not being drafted out of high school, Torkelson broke Barry Bonds’ Pac-12 record for home runs by a freshman by smashing 25 “Tork-bombs” in 2018.

The Diamondbacks avoided a sweep with an 11-6 win against the Tigers on Sunday to advance to 33-41 on the season. The Dbacks’ next 18 games are against fellow NL West opponents starting at home with a two-game series against the San Diego Padres.