One week after announcing a change in the process for determining which teams participate in its championship game, the Pac-12 revealed details about the road to Las Vegas.

Kickoff times for the opening three weeks of the season and a handful of weeknight conference games were released on Thursday, and one issue became immediately clear:

There will be no shortage of national exposure for Pac-12 teams early in the season, when media narratives are formed and playoff pursuits established.

The conference will make nine appearances on broadcast television across the weekends of Sept. 3, 10 and 17, with three more games on ESPN.

The list includes Oregon’s showdown against Georgia (ABC) to start the Dan Lanning era; Washington State’s trip to Wisconsin (FOX); Cal’s first visit to Notre Dame (NBC) in 55 years; and the game that could have a greater impact on the Pac-12 than any other: Utah’s season opener at Florida (ESPN).

If the defending conference champions intend to claim a College Football Playoff berth, they must survive The Swamp.

Other reactions to the early-season schedule:

— Lincoln Riley’s debut for USC (against Rice) is on the Pac-12 Networks, which assuredly disappoints some USC fans but is actually beneficial:

It reduces the number of meaningful USC games later in the season that could be broadcast on the conference’s wholly-owned network.

(The number of times a team must appear on the Pac-12 Networks is typically equivalent to the number of non-conference home games it plays.)

Of note: Washington’s first-year coach, Kalen DeBoer, will open his tenure against Kent State on FS1.

— The Pac-12’s master schedule, released in December, featured only one conference game on a Friday (excluding the day after Thanksgiving): USC at Colorado on Nov. 12.

Since that point, three more weeknight games have been added:

Of note: Utah-WSU is the first conference game on a Thursday night since UCLA-Stanford in 2019.

— The heaviest load of games on the Pac-12 Networks comes in Week Two (Sept. 10), with five total and three in overlapping afternoon broadcast windows: Portland State at Washington, UNLV at Cal and Alabama State at UCLA.

Due to the logjam, the Washington and Cal games will be shown only on the local Pac-12 Networks feeds (and via the Pac-12 Now app)

— There are only two night games on each of the first two Saturdays, but the pace picks up on Week Three (Sept. 17) with four kickoffs at 7 p.m. or later: San Diego State at Utah, Fresno State at USC, Eastern Michigan at ASU and North Dakota State at Arizona.

Of note: ESPN and Fox are prohibited from scheduling September day games at Arizona or Arizona State unless the schools agree. There is no equivalent cold weather policy for night games in Salt Lake City or Boulder.

— The USC-Fresno State duel is set for 7:30 p.m. on FOX, marking the second consecutive year the Pac-12 has occupied a night window (Pacific Time) on the broadcast network.

(Last season, USC and Stanford had the honors.)

That’s a prime placement for the Trojans — and the conference — given the alternatives: An afternoon kickoff in crowded time slots or a night start on cable.

It’s the final game of a quadruple-header on FOX that includes Ohio State (against Toledo) as the lead-in game for USC.

— As a reminder: The remaining Pac-12 start times will be released either six or 12 days in advance of kickoff.

ESPN and Fox have four (combined) opportunities to use the six-day windows and typically reserve those for the second half of the season.

— Lastly, the bowl schedule was released Thursday, as well.

Here are the dates, times and TV assignments for the Pac-12 games:

Logistics for the Holiday Bowl have not been announced. 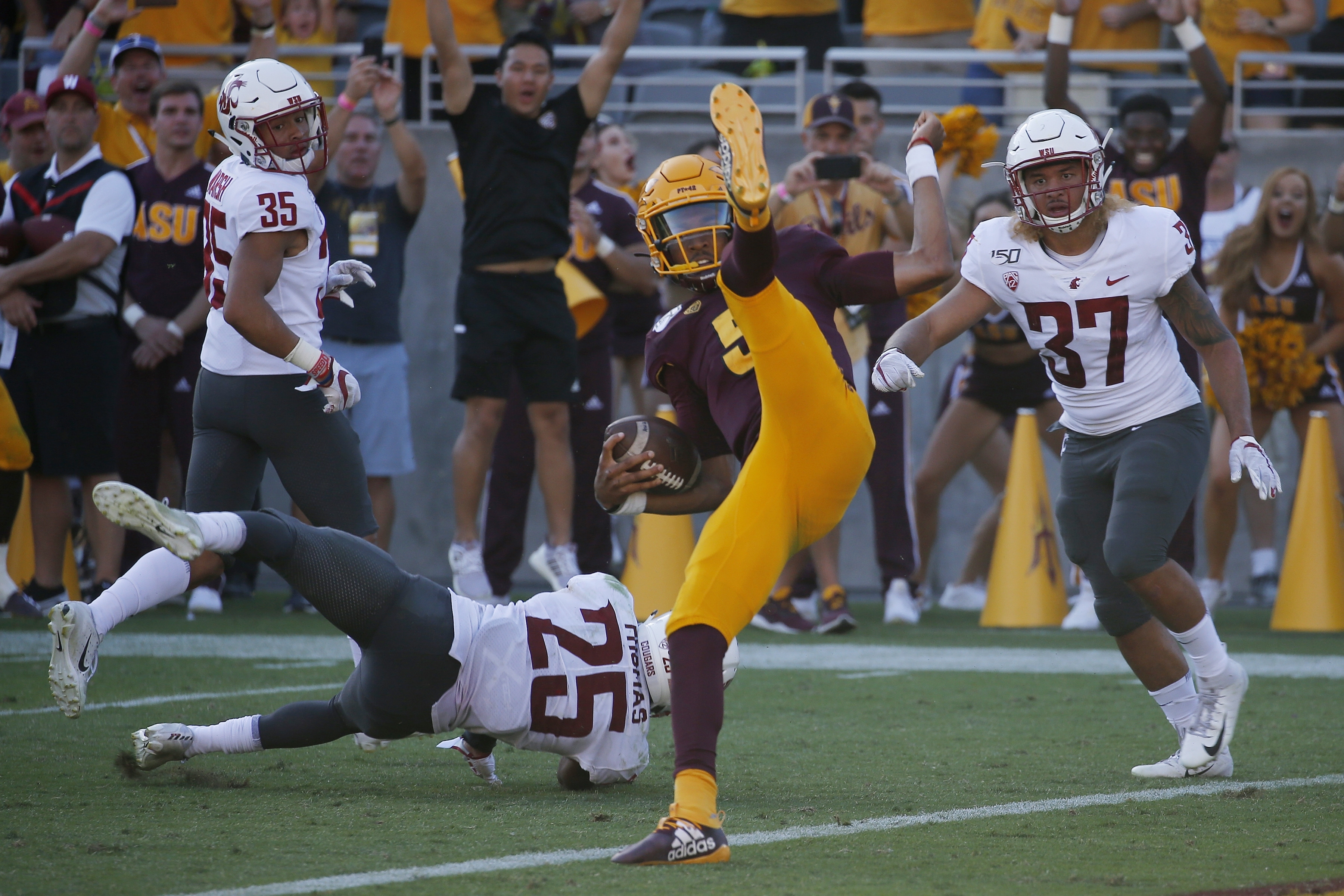