Send questions to pac12hotline@bayareanewsgroup.com or hit me on Twitter: @WilnerHotline. Due to volume — and in some cases, the need for research — not all questions will be answered the week of submission. Thanks for your understanding.

If California Senate Bill 1401 is passed into law, what will be the impact on Pac-12 schools? Will it impact all Power Five schools? — @TerryTerry79

Impossible to know, but we can take our best guess …

If forced by law to pay athletes for services rendered, Stanford, Cal and possibly UCLA will give serious thought to removing themselves from the major college football scene.

Influential voices on each campus are already opposed to the current state of play — or should we say, pay-for-play. Diverting revenue to football and basketball, and away from the Olympic sports, would prompt an existential crisis on each campus … and thus for the Pac-12 writ large.

Ultimately, the schools probably would decide to stick with football. If USC takes an all-in approach to the new world order, there will be intense pressure on UCLA to do the same, and that would create a chain reaction in the Bay Area.

One piece to consider is the timing: The longer the implementation phase of SN-1401 (if it passes), the more effectively the schools will respond. Shifting their economic models in time for the 2023 calendar year is an entirely different challenge than doing so by ’24 or ’25.

As for the second question, we see the potential spread of SB-1401 (as law) possibly playing out differently than NIL did following passage in California in 2019.

NIL was easily adopted in other states because it didn’t directly impact university budgets — the compensation to athletes comes from the private sector.

But SB-1401 would carry momentous, direct consequences for universities nationwide.

Yes, there would be competitive reasons for other states, in the West and elsewhere, to adopt similar legislation: The California schools could use the “degree completion fund” and the access to annual payments as recruiting carrots.

But there would be resistance on a multitude of fronts and, frankly, we would expect legal challenges to be filed on behalf of Olympic and women’s sports.

Combine the Title IX issues with the economic consequences that accompany SB-1401, and the end-game is more difficult to sketch than it was for NIL.

I’m not even convinced it will pass.

Are these teams’ alumni willing to spend the money necessary to compete in the NIL era: WSU, Cal, Arizona, Utah, Oregon State, Arizona State. Or are they done? If you want to compete with USC, Oregon and maybe UCLA and Washington, you have to spend! — @rwjmsmith

Most of the schools have NIL collectives that are either established or in the process of being created.

But from what we have witnessed, only Oregon possesses a donor collective (Division Street) as committed and aggressive as the high-profile operations that have made headlines across the country. (USC doesn’t even have a collective.)

Let’s envision a scenario in which that existence remains fixed for a number of years. What happens?

Well, Oregon would thrive on the recruiting trail, USC would use its advantages (tradition, local recruiting base, Lincoln Riley and business opportunities in L.A.) to keep pace, and everyone else would take a secondary role.

And guess what: That’s essentially the same talent-acquisition hierarchy in place on the West Coast for years.

With its SEC mentality, Oregon recruited at a higher level than anyone else during the Mario Cristobal era, and we expect Dan Lanning to do the same.

So as NIL plays out, the Ducks will remain the favorite with a talented roster vulnerable to the same crosswinds (injuries, bad breaks, questionable coaching) that typically exist.

One could easily make the same case on a larger canvass: The programs that dominated the national scene before NIL will continue to dominate with NIL.

That depends on whether you’re referring to payments in-hand, guaranteed but uncollected cash, or the maximum possible value of an NIL deal.

Without seeing all the contracts, we cannot provide an answer.

However, one word of caution: Many, if not most of the NIL deals reported on social media are greatly exaggerated in order to generate buzz for the player, school, business or NIL exchange.

Be careful what you believe.

Was there ever really a chance Washington State president Kirk Schulz would have taken either the Big 12 (commissioner) or NCAA (president) jobs? — @TWamsgans

Only Schulz knows for sure, but the speed with which he publicly disavowed interest in each vacancy suggests there wasn’t much chance of him leaving Washington State.

Schulz just turned 59; he and his wife, Noel, are clearly happy in Pullman; and he’s taking on a new responsibility as the head of WSU’s state-wide system.

The Hotline has spoken to Schulz a handful of times over the years — most recently about commissioner George Kliavkoff’s performance thus far — and have concluded he possesses a better grasp of major college sports than any president we have ever interviewed.

Schulz talks about football in a manner akin to an athletic director talking about football, not your typical university president.

Combine that insight with his background and contacts — he worked in the SEC (Mississippi State) and was a Big 12 president (Kansas State) — and Schulz would have been supremely qualified to lead the NCAA.

Except that he’s too smart to take the job.

What’s UCLA coach Chip Kelly’s problem? Wouldn’t it be better if he made recruiting a higher priority? — @sck_2008

Kelly has been selective in his recruiting; of that, there is no question. One reason is the nature of UCLA’s admissions process, which is perhaps more comparable to those at Cal and Stanford than it is to USC and Oregon.

But recruiting can no longer be measured simply by success luring high school prospects — the transfer portal must be accounted for, and Kelly has been active on the front.

What’s more, I’d argue the Bruins have placed a greater emphasis on recruiting in the past 18-24 months than they did early in Kelly’s tenure. Their 2022 signing class was small (11 players) but heavy on four-star prospects (six).

Kelly’s general approach to roster building looms above it all. He wants players who fit his system and his culture, who will develop and thrive and navigate the academic challenges. I’m not sure that it’s an old-school approach so much as simply deliberative.

The Bruins produced more NFL draft picks this spring (six) than any school in the conference, so the development piece seems to be working.

If you believe their chief problem in 2021 was a defense that underachieved — that’s certainly our assessment — then the primary issue isn’t personnel but coaching. And Kelly took steps to correct that issue.

How does ASU coach Herm Edwards still have a job after throwing his staff under the bus of the NCAA and losing his best players to the portal? — @SirCharles_OG

This has replaced ‘When will DirecTV carry the Pac-12 Networks?’ as the most frequently asked question on the Hotline.

And unlike the DTV matter, we don’t have a good answer, other than Edwards remains employed because ASU president Michael Crow wants Edwards employed.

Clearly, Crow seemingly has little regard for top-down accountability. Edwards’ coaching staff laid waste to the NCAA rulebook, but Edwards himself remains untouched.

At this point, the Sun Devils would be unable to hire a capable replacement. It’s too close to the season and the arrival of the NCAA’s Notice of Allegations (NOA), which will detail the formal charges against the program. No capable coach would accept the job without knowing the extent of the inevitable sanctions.

ASU’s options are limited: Stick with Edwards, at least until the NOA arrives; or promote an assistant to the role of interim head coach.

Either way, the rest of the Pac-12 South is undoubtedly appreciative of the manner in which Crow and athletic director Ray Anderson have handled the situation.

ASU’s high school recruiting is in a deep freeze, creating opportunities for competitors.

Why are you the way that you are? — @dadofboys5

Because I am what I am. 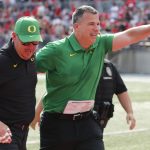