“I look at these things that we do like it’s a practice,” Woodard said. “It’s like a spring ball practice. I’m out here with my guys having fun.”

The sophomore offensive and defensive lineman was happy to have the opportunity to put his skills on display for college coaches from across the country. Sa’Kylee believes that a lot of coaches hung around to watch him in action and says Colorado State, Notre Dame, ASU, and many others have been showing interest over the last few months.

Sa’Kylee has enjoyed bonding with his teammates over the off-season and has equally enjoyed breaking school records. He broke the school’s sophomore squat record that was previously held by current New York Giants linebacker, Blake Martinez.

Broke the sophomore squat record with a great feeling 505!!! Formerly held by @Big__Blake50 can’t wait to get keep working and get stronger !! @cdo_football @CoachJordanAZ pic.twitter.com/B5dHjks2Y8

Woodard mastered the “humble brag” saying he reached out to Martinez on a bunch of different social media platforms to let him know he set the new sophomore record at Canyon Del Oro.

Sa’Kylee has been feeling really good about his recruitment thus far and has a lot of confidence about his future prospects. As a rising junior Woodard has taken on a bigger leadership role. He says that it’s important for him to noticeably work hard in order to motivate his teammates to work hard as well.

2017 Prospects on the Cusp of First Offers, Film Breakdown of 2017 Pass Rusher 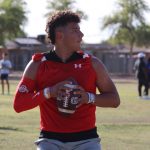