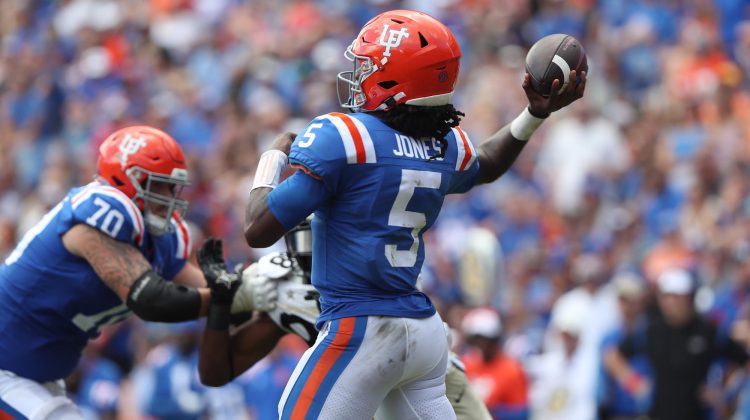 The Arizona State Sun Devils are adding a new quarterback into the mix.

Florida transfer Emory Jones announced that he will be heading to Tempe. The junior has been rumored to the Sun Devils for a few weeks.

#ForksUp 🔱 Let’s get it!! pic.twitter.com/mPid7MpDAL

Last season, he started 12 games for Florida while throwing for 2,734 yards and rushing for another 758.

NIL seems to be playing in the favor of ASU. He’s reportedly receiving $75,000 plus a vehicle.

Arizona State’s NIL collective is reportledy working towards a deal that would pay Emory Jones $75,000 and would include a vehicle.

This would be the largest deal for an Arizona State player yet.

Emory Jones and the Gators cap off a 99-YARD DRIVE.

We've got a ballgame. pic.twitter.com/qrmYfPkdlt

Emory Jones for six. Things are getting out of hand in Gainesville. @InsideTheGators pic.twitter.com/VQV1viBCF2

Arm strength is not an issue.

Ok this is insane. Emory Jones looks off the safety playing cover 2 and drops it in the bucket #BlueChipSummer pic.twitter.com/4CgAro5esh

👀🐊🏈 Emory Jones finds Justin Shorter with a 42-yard Hail Mary to end the half at LSU. #Gators pic.twitter.com/LE3PwoN1ZW

He is one-year removed from top QB expectations.

Interceptions were an issue in 2021.

His 10 picks this season are the most by a Florida QB since Jeff Driskel in 2014. pic.twitter.com/hpEiKLxb9W

Say what you want about Gators QB Emory Jones, but he’s such a nice guy that he moved back a row because this lady was struggling to see over his hair pic.twitter.com/TTQa0PZbY9