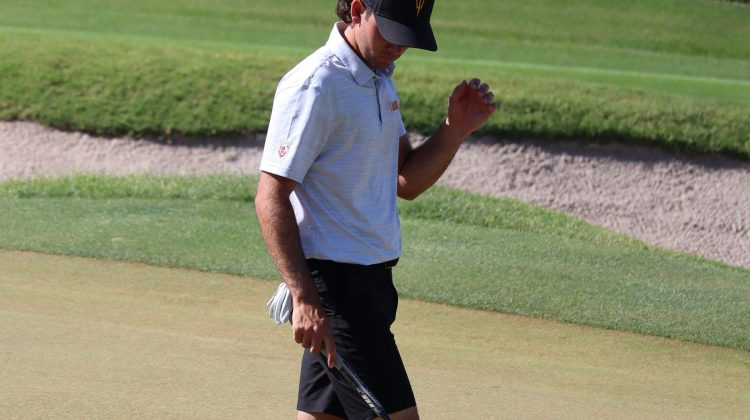 The Arizona State University men’s golf team is moving on to the semifinals in the NCAA Championship Tournament.

The berth was earned through some deja vu, with a twist.

With ASU tied 2-2 to Oklahoma, Sisk delivered in a playoff hole on 10, with a clutch putt.

ASU is advancing to the semifinals!

Cameron Sisk nailed this putt on 10 for the playoff & his @sundevilmgolf teammates are ecstatic!

They will tee off against Pepperdine this afternoon. @Sports360AZ pic.twitter.com/wgu0V7xAq5

This is a flip from last year’s match play against Oklahoma, when it came down to Sisk on the final holes. He ultimately fell short and Oklahoma advanced.

The other two winners were Preston Summerhays (7&5) and Mason Andersen (UP1). Summerhays dominated in 13 holes and Andersen hit six birdies, clinching victory with a clutch putt on 18.

On 18, Mason Andersen secures his match win on this long 🐥 putt. @sundevilmgolf is up 2-0 after Preston Summerhays won in 13 holes @Sports360AZ pic.twitter.com/c1XxM6F8aK

This story will be updated with quotes after the semifinal matchup against Pepperdine. If ASU wins, they will play for the NCAA title tomorrow against the winner of Vanderbilt and Texas.