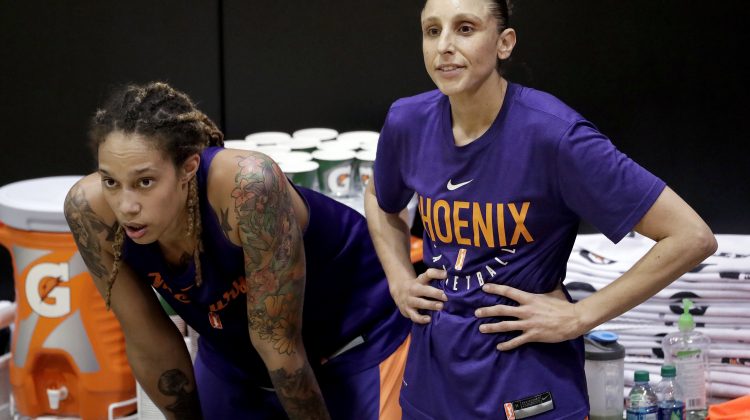 This year’s Phoenix Mercury training camp marks the beginning of one of the most unique seasons in franchise history.

“It’s a new cast of teammates, of coaches this year,” superstar guard Diana Taurasi said. “Every year is different. You could use past experiences to get you through training camp and the ebbs and flows of it but it’s all new and you kind of try to come into it like a rookie.”

The newness of this year’s coaching staff and pieces of its roster doesn’t change the sour taste left from their WNBA Finals loss last season.

“We have unfinished business,” guard Sophie Cunningham said. “We got so close last year.”

Acclimating to the fresh faces is part of a long process of everyone figuring out their roles.

“When you have so many newcomers in, it’s hard to know what they do best, it’s hard to get a rhythm,” Cunningham said. “I just think from yesterday to today was a huge improvement so I think when everyone gets the feel for what everyone does, especially playing with D and Sky and Tina and when they need the ball and when they need the space is really what us players have to do in order for the GOATs to thrive.”

The challenge is heightened that much more with some of the roster still playing overseas as training camp begins.

“That’s a reality for the WNBA,” head coach Vanessa Nygaard said. “This is an opportunity to develop other players. We want to keep those players that are overseas as up to date as possible. Our assistants are working to make sure that anything that we install here, that we work on here, that they’re getting information on and we’re discussing with them so trying to get them hitting the ground running.”

Those players overseas will be returning to quite the roster, led by Taurasi, Skylar Diggins-Smith, and last year’s scoring champion in Tina Charles.

DT’s thankful to be playing at a high level in year 18.

“I debate every day if I’m gonna come back and I keep coming back,” Taurasi said. “I still have this competitive fire. I still love to play basketball. I still love coming to the gym. Things change as you get older. The work you have to put in gets harder…I really changed my daily life to be able to be here and 39 and compete and hopefully we have a great year to help this team get back to where we gotta go.”

It’s a good thing she keeps coming back, because she clearly has a lot more to offer.

“Her IQ and the way she sees things and the leadership is unmatched,” Cunningham said. ”She’s playing more than anyone right now. Even the newcomers, she’s getting more reps than them. For her to be doing that at her age, you’d have to be insane.”

As solid as guard play will be for the Mercury, Charles will be the focal point of the offense.

“Tina will be holding down our post for us,” Nygaard said. “We’ll build from around her so players that compliment her.”

Charles averaged about 23 points and 10 rebounds per game last year with the Mystics.

The reunion with her USA basketball and overseas teammate in Taurasi could inspire a natural chemistry between the team’s stars.

“She’s one of my OG’s,” Taurasi said. “I’ve known Tina for a long time…an amazing human being and not to mention, how amazing she is on the court. I’m excited to get on the court and get that synergy going.”

Team leadership is that much more relevant when considering the emotional impact of not having Brittney Griner at training camp.

“It’s BG,” Cunningham said. “There’s no one like her in the whole world. It’s not about basketball anymore, we just want her to be well as a human being.”

While Taurasi didn’t have too much to say regarding the situation, she referenced her personal experience.

“I spent 10 years there so I know the way things work there,” Taurasi said. “It’s delicate…It’s a dangerous world everywhere you go. It might change the perspective of different people going overseas.”

As far as on-court implications are concerned, Nygaard is making decisions with a ‘next woman up’ mentality.

“As a staff, we’ve adjusted knowing she wouldn’t be here at least for the beginning of the season to change a little bit of what we do offensively and defensively,” Nygaard said. “I definitely wake up sometimes in the middle of the night worried about BG.”

With the loss of last year’s Finals in their minds, and Brittney in their hearts, this next chapter of Phoenix Mercury basketball will be well worth the read.