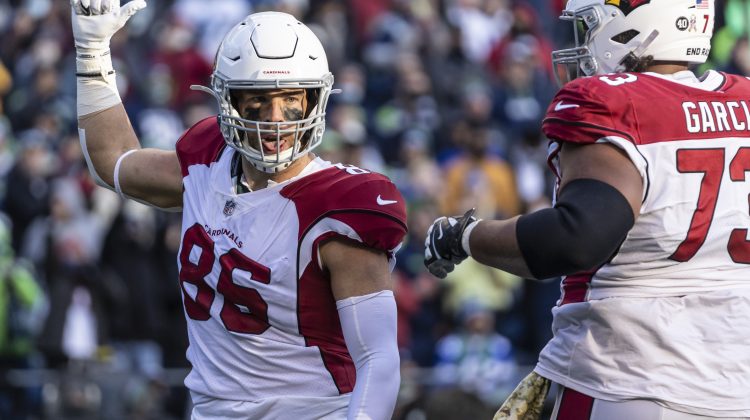 Rocking a red/burgandy suit and tie, Zach Ertz says he is “all in” on the Arizona Cardinals.

The Cardinals are also all in on him, signing him to a 3-year more than $31 million deal before free agency officially begins.

“I wanted to be here,” Ertz said during his press conference. “They made it known that I was a priority from the moment the season ended… I wanted to be in a place that respects me not only on the field but off the field as well.”

Ertz knows there were other options out there, but he didn’t feel the need to test out the free agency waters.

Ertz will likeley bave an expanded role in 2022. In 11 games with Arizona, he racked up 56 catches for 574 yards and three touchdowns. His relationship withb Kyler Murray is only going to grow with a full offseason together.

“Most of those conversations [last year] were geared towards football and our next opponent,” Ertz said. “I think we’re really just scratching the surface with our chemistry level on the football field.”

As of now, Ertz seems like the second option behind DeAndre Hopkins. Christian Kirk is reportedly signing a 4-year $84 million deal with the Jacksonville Jaguars. He almost had 1,000 yards in the Cardinals offense last year.

That maximum value of $21M per year makes Christian Kirk the 3rd highest paid WR in the NFL. https://t.co/z7wFlz9SEL

Chase Edmonds is a pass-catching threat out of the backfield. He’s reportedly leaving Arizona to sign with the Miami Dolphins.

The Cardinals could still pursue more pass-catchers on the free agent market and/or in the draft. They hit the mark with Rondale Moore last year, who should see an increase in prodcution this season as well.