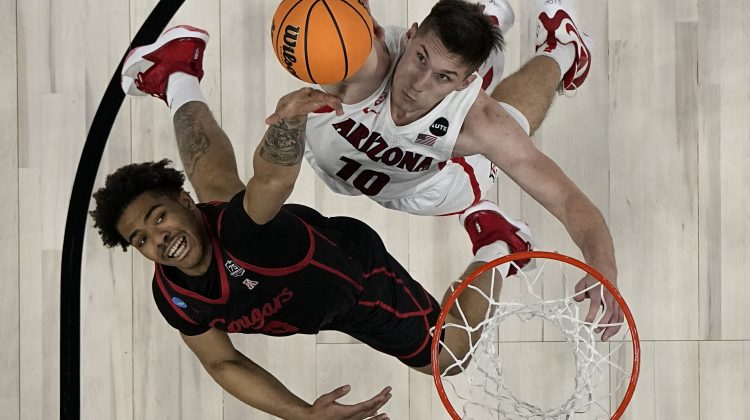 The Pac-12 regular-season and tournament champion is done, out, gone.

The No. 2 overall seed in the NCAA Tournament was eliminated Thursday night by the No. 18 overall seed.

After that pulsating escape in the second round, Arizona was sent packing in the Sweet 16. And it wasn’t all that close.

Houston led the entire game and spent most of the stretch run with a double-digit cushion on its way to a 72-60 victory — as if the Cougars were the No. 1 seed in the South and the Wildcats the No. 5.

Should we have seen it coming?

The Cougars were a mere 1.5-point underdog on the betting markets, while the highly-respected Pomeroy efficiency ratings — perhaps the best predictive analytic in college sports — pegged them as a narrow favorite.

But “It was supposed to be close” is hardly satisfactory, especially given that it really wasn’t.

As is often the case when a No. 1 seed loses decisively prior to the Final Four, there wasn’t a single cause.

Our search for answers leads down multiple paths:

— Problems at the point

Point guards rule the NCAA Tournament. In this regard, the Wildcats sustained a double-whammy. They had little success defending Houston’s Jamal Shead (21 points, six assists) while Kerr Kriisa again played limited minutes on a bad ankle.

We aren’t convinced the outcome would have been different with a healthy Kriisa in the rotation. The ball moves better when he’s on the floor, but Kriisa can undermine the offense with bad shot selection and is a liability defensively.

In other words: He’s not quite an ideal lead guard for the NCAAs, where the best of the best are elite athletes capable of breaking down opponents off the dribble and holding their own in man-to-man situations.

— So many rookies, not enough athletes

The Cougars were tougher, won more 50-50 situations and spent all 40 minutes in attack mode.

Much of the game was a rock fight, with every pass, dribble and shot contested on both ends. Houston thrived in that environment, while Arizona never seemed comfortable.

As for Azuolas Tubelis, well, he never seemed present. The Wildcats’ second-leading scorer was 2-of-15 from the field and scored seven points (combined) against TCU and Houston.

Let’s not assign much responsibility for the outcome to Arizona’s shortcomings. Houston’s exceptional play was the prime driver of the end result.

The Cougars have eliminated the No. 1 seed in the South by 12 points and the No. 4 seed (Illinois) by 15. Clearly, they had no business being a No. 5 — the selection committee blew it.

Had the Cougars been slotted on the No. 2 or 3 seed line, they wouldn’t have faced Arizona until the Elite Eight and, in fact, might have been placed in a different region altogether.

This wasn’t like so many of Arizona’s mystifying March flameouts. In this instance, the Wildcats were beaten by a better team.

We have come to the final, deeply subjective explanation for the outcome:

Arizona’s credentials — not to mention the aura it carried into the NCAAs with a 31-3 record — were inflated by its dominance of a mediocre conference.

How do we know the Pac-12 was mediocre during the regular season?

Because it won just 67 percent of its non-conference games and was 2-11 against opponents ranked in the AP top 25.

Because it received just three NCAA Tournament bids, one less than the Mountain West, and sent just two teams into the second round.

The Pac-12 had two superior teams this season, and one of them, UCLA, was rarely healthy.

The Wildcats were the one-eyed team in the conference of the blind, which made for a gaudy resume.

It also made them appear better than they were.

Put another way: Their weaknesses were rarely exposed.

The evidence for our theory doesn’t end with the 12-point loss to Houston. The Wildcats were pushed to overtime in the second round by the No. 8 seed, TCU, which finished fifth in the Big 12.

So combine Arizona’s inflated credentials with an opponent that was substantially better than its seed, presented matchup problems and held a decisive edge at point guard — in part because of injury — and a reasonable explanation begins to take shape.

It doesn’t diminish what the Wildcats accomplished in a season that nobody saw coming and should be cherished for years.

It simply adds context to the events of Thursday night.