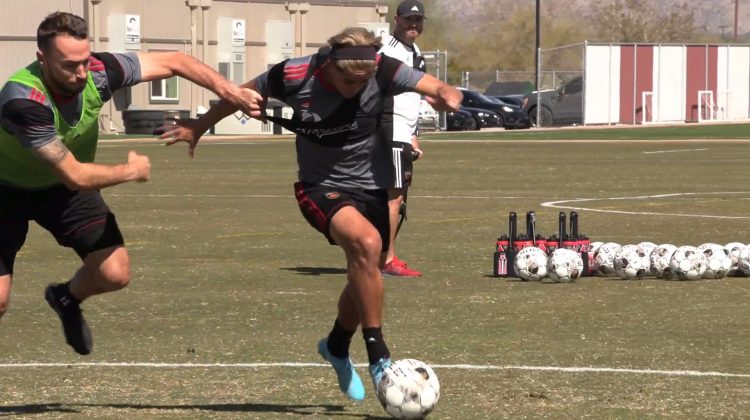 Phoenix Rising FC (1-1-0) is looking to rebound after their first road trip of the year ended on a sour note with a 2-1 loss to Las Vegas Lights FC.

Head coach Rick Schantz described the match environment as a “circus.” With a rough field, pitchside beds, and a live DJ at Cashman Field – a venue that also hosts Vegas’s minor league baseball team. Schantz said that he spoke with Rising’s general manager about the unsafe conditions, and the club has brought up its concerns with the USL Championship. “Ultimately once we are in a situation like that we notify the proper people and you just got to move on,” Schantz said. “You can’t dwell on it.”

Lights FC struck early with a 12th-minute goal off a midfield turnover. Their plan for the rest of the night was to play back and counter. Lights FC took a 2-0 lead in the 68th minute, making it the second straight game where Phoenix gave up two goals.

“Whenever you concede a goal it’s always one or two simple mistakes that turn into the other team capitalizing,” defender Joe Farrell said. “I think they just capitalized on the two that we really did. And they punished us.”

Rising’s sole goal came from Claudio Repetto, who turned a pass from Joey Calistri under the diving arm of Vegas’s goalkeeper in the 77th minute. After starting the season with games against an expansion team and last season’s last-place conference finisher, Rising FC’s schedule will take a tough turn as they prepare to play two playoff-caliber teams.

The first of which is San Diego Loyal SC, who they’ll be hosting on Saturday.

“I think they’re one of, if not the best team in the league,” Schantz said. “They’ve added a lot of good players…The way the play is very attractive, lot of rotation and lot of good ball movement. I think they’re a little bit more practical in their approach to the game now so they can get you a couple different ways. This is going to be an extremely difficult game.”

San Diego likes to hold possession and open up the field with their spacing. Phoenix will be looking to get around Loyal SC’s unique tactics with their aggressiveness and tenacity.

“We just tend to come out and present ourselves the way we want to be known, which is be aggressive, play forward, get as close as we can and stop teams from scoring,” defender Baboucarr Nije said. “Let them be scared of us because it’s not just by words. The way we play is why teams are afraid of us, and once we slack that down then they will start to have confidence, and we don’t want that.”

Loyal SC will be coming off of short rest, having dropped a match 1-0 in Tulsa on Wednesday.

Another factor riding in Rising’s favor is home-field advantage. The club has yet to lose a regular-season game at Wild Horse Pass since they started playing there last year. Schantz says the atmosphere is like having an extra player.

“Once you hear the roar of the fans, the Banditos, everyone involved, it really gets you going and gives you the chills a little bit,” Farrell said. “It gets your heart rate up and gives you that little extra motivation to make that extra run or connect that final pass to score a goal.”

With only two games played so far, Schantz says these early games in the season are vital because of how the points are magnified. The club can make up a lot of ground in the standings with a win.

“Each game we play, the goal is to get three points,” Schantz said. “But I think at this point right now we have to just play better. We have to be more competitive, we have to be better in the duels and we’ve got to come with the right attitude every game. I think if we do that we’ll be alright.”

Rising FC’s match against San Diego will kick off from Wild Horse Pass Saturday at 7:30 p.m.. The game can be watched on Bally Sports Arizona Extra as part of their new broadcast partnership that began this season.