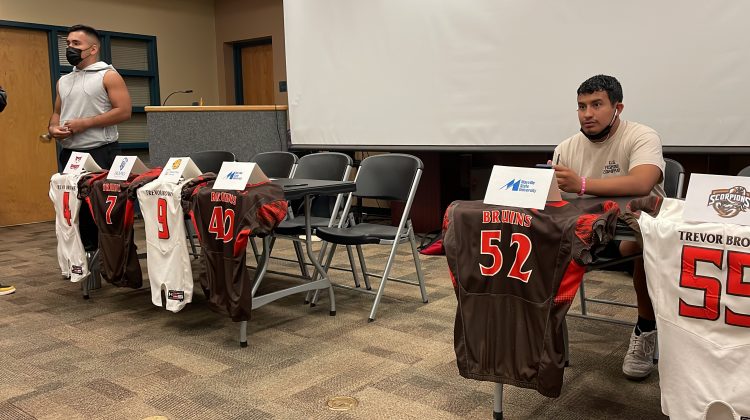 Thursday was a day of joy and celebration at the intersection of 75th Ave. and Catalina Drive, as seven Trevor Browne football standouts made their college commitments official in front of a sizable crowd of students, parents and administrators.

The Bruins enjoyed a landmark season in 2021, going 6-4 and finishing in a tie for second place in the 6A Desert Southwest section. As a result of their contributions to the team’s resurgence, many of the team’s keystone players – including quarterback Alex Rivera IV, leading receiver Darius “Dawood” Montejano and linemen Isidro Balderas and Jesus Murrieta – secured offers to play at the next level.

“It’s a blessing,” said Rivera, who will attend Willamette University in Oregon. “To see everyone else succeed and be able to see the young guys look up to us, it just shows how much we’ve done for this community and for this school.”

Each player gave a statement outlining their reasons for choosing their respective school and offering words of advice to their younger teammates. Every player mentioned academics as a primary factor in their choice, and seemed to echo head coach Francisco Rangel’s message about the importance of grades and planning for life after football. Rivera, Balderas and Murrieta all plan to pursue business degrees, with Rivera hoping to eventually break into real estate.

“This is like a dream come true,” Rangel said. “Seeing kids move on and do things that we’re not supposed to do out of our district and out of our school. These kids are going to be great representatives for their universities and for our school.”

While Murrieta and fellow offensive lineman Vincent Tallabas will remain in the Grand Canyon State to play for the Salt River Scorpions of the Hohokam Junior College Athletic Conference, the rest of Trevor Browne’s commits will follow a path similar to the one that Rangel took following his own high school career.

Rangel starred at Raymond S. Kellis High School in Glendale before accepting a scholarship to Dakota Wesleyan University of the NAIA’s Great Plains Athletic Conference, and four of his players – Montejano, Rivera and Balderas defensive back Jose Ponce – will also be headed to Division III and NAIA schools in the northern part of the country.

“The biggest thing they have to understand (about the journey) is that it isn’t for current you,” he said. “It’s for future Alex Rivera, future Isidro Balderas and future Jose Ponce. It’s going to be an adjustment, they’re going to get homesick, but they’re going to realize that they’re working towards something to better themselves. I’ve been in those shoes and it really shaped who I am today.”

Rangel’s players seemed to take his message to heart, emphatically expressing their excitement to continue their playing careers and further their education. Although some, like Balderas, seemed mildly displeased about the prospect of trading Arizona’s sunshine and palm trees for the harsh winters of the upper Midwest, the overall feeling was one of optimism and appreciation for the road ahead of them.

“(Coach Rangel) told me to bring a sweater,” said Balderas, who will be joining former Bruins teammate Fernando Macias at Mayville State in North Dakota. “He also said to have fun, because not a lot of people get this opportunity to go play college football. At the end of those four years, hopefully I’ll have a good-paying job to support my family.”

In a season already marked by success and growth for Trevor Browne’s football program, Thursday represented yet another victory to add to the list. For the second consecutive year, the Bruins sent six or more players to college, reinforcing the culture that Rangel has established in his short time in charge of the program. The seven players who signed their letters of intent gave the program’s young players seven more reasons to buy into Rangel’s philosophy, and he is determined to increase that number with every passing year.

“It’s huge for our younger guys because now they’ve seen it done before,” he said. “We’re going to do everything we can to promote them, we’re going to put them in positions to be successful and we have kids talking about that now. I’m really excited about our future.”