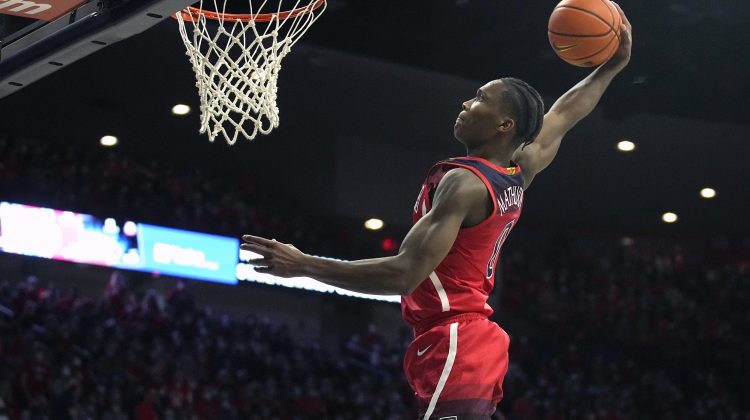 We’re exactly one month from Selection Sunday. Here’s a look at five of the top storylines in Pac-12 men’s basketball …

When the sun rose Saturday morning, the conference was in solid position to send at least four teams to March Madness.

Arizona, UCLA and USC were essentially locks, while the Pac-12 had three options to collect a fourth bid:

— Washington State (No. 42) qualifying as an at-large team.

— Oregon (No. 46 in the NET rankings) qualifying as an at-large team.

— Any team other than the Big Three earning the automatic bid by winning the Pac-12 tournament.

But Saturday brought two major upsets: Oregon did the unthinkable and was demolished at home by Cal (4-11 in league play), while WSU stumbled at home against Arizona State (4-9).

The Quadrant III losses stand as major stains on their resumes, particularly at this time of year, when bubble teams must make their case for NCAA inclusion.

The Cougars dropped five spots overnight in the NET, to No. 47, but are currently in perilous position without a single Quad I win.

The Ducks plunged 16 spots overnight in the NET, to No. 62, after what might be the worst loss of coach Dana Altman’s career in Eugene.

As a result, both teams face exceedingly narrow paths to the at-large pool, and the Pac-12’s best chance to collect a fourth NCAA bid is an upset in the conference tournament.

We don’t view that as much of a chance at all.

A few weeks ago, the conference was on track for a handful of high seeds. Arizona and UCLA were contenders for No. 1s, with USC in the running for a top-four slot.

Then the Trojans lost at home to Stanford — in fact, they were swept by Stanford — and failed to secure a signature win at Arizona.

Meanwhile, the Bruins have lost three of their last four, including a triple-overtime stumble at Arizona State.

At this point, neither team looks like a No. 1, 2 or 3 seed, and both seemingly face uphills climbs to securing a No. 4.

In Tucson, the picture is bright: Arizona’s home sweep of the L.A. teams, avoidance of bad losses and beneficial results elsewhere — in particular, Michigan’s win over Purdue — have strengthened the Wildcats’ case for a No. 1 seed. (Arizona thumped Michigan early in the season.)

As a No. 1, the Wildcats would eliminate any possibility of being the second seed in Gonzaga’s region.

If Washington State or Oregon somehow make the field, a No. 11 seed awaits.

Arizona is in full command of the conference race, with a three-game lead in the loss column over USC, UCLA and Oregon.

That’s a three-game lead with seven to play, and two of those seven are visits to McKale Center by Oregon State and Cal.

Only a complete collapse would prevent the Wildcats from winning their first regular-season title since 2018 and securing the No. 1 seed in Las Vegas.

Below Arizona, the situation is muddled. USC, UCLA and Oregon have four conference losses and would receive opening-round byes if the season ended today.

The Washington schools are lurking with five losses but have brutal schedules ahead, including back-to-back games against each other at the end of the month.

The Bruins and Trojans should be safe in the race for a top-four position. And as wobbly as Oregon looks, the most likely end-game includes a bye for the Ducks, as well.

Arizona’s Tommy Lloyd is the frontrunner by an order of magnitude.

The first-year coach has maximized the roster he inherited from Sean Miller with a fast-paced, free-flowing style. The Wildcats are consistent with their effort and playing for each other; they aren’t burdened by expectations or personal agendas.

Unless the Wildcats stumble unexpectedly down the stretch — by that, we mean three or four losses — Lloyd should be the unanimous pick for Coach of the Year in the conference and a strong contender for the national version of the award.

Beyond Lloyd, there are two candidates at the moment: Washington State’s Kyle Smith and Washington’s Mike Hopkins.

Smith needs the Cougars (7-5 in conference) to contend seriously down the stretch in order to strengthen his case. (WSU hasn’t been relevant in ages.)

Hopkins needs the surprisingly competent Huskies (8-5), who were picked 11th in the preseason media poll, to remain in the middle of the pack.

Arizona wing Bennedict Mathurin is an obvious frontrunner as the best player on the best team and bolstered his case with 25 points in the blowout win at Washington on Saturday.

But the calculation might not be so simple if the Huskies remain in the top half of the standings and guard Terrell Brown Jr. maintains his production pace.

Brown’s status as a senior could be an advantage over Mathurin, a sophomore, if any of the coaches are swayed by his commitment.

(Voting takes place after the final weekend of the regular season, with the individual awards and all-conference teams announced prior to the Pac-12 tournament.)

Depending on their performances in the final weeks, UCLA’s Johnny Juzang and USC’s Isaiah Mobley could emerge as  top-tier candidates, as well.