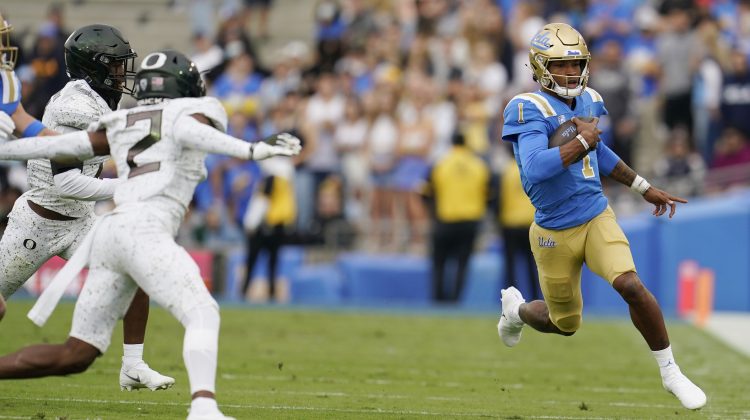 The Hotline has published biannual Quarterback Comfort Quotient (QBCQ) rankings for years. Never has there been a better example of the process than what we witnessed in Salt Lake City in the fall of 2021.

Utah was No. 1 in our QBCQ rankings prior to the season because the Utes possessed not only a proven starter but also a capable backup.

Admittedly, we didn’t expect the starter, Charlie Brewer, to stumble and the backup, Cameron Rising, to lead the Utes to the conference title. But the situation proved exactly why having two capable quarterbacks is critical.

Whether it’s because of injury or substandard play, the starter is unlikely to take every meaningful snap. Teams with quality Plan Bs are best equipped to navigate the season.

Welcome to the first Pac-12 QBCQ rankings of 2022, and please note:

— We’ll publish a revised version after spring practice. (The rankings will assuredly change.)

— Previous school is noted for players who have transferred in 2021-22.

1. UCLA
Projected starter: Dorian Thompson-Robinson
Projected backups: Ethan Garbers, Chase Griffin
Comment: No team is better positioned to navigate QB potholes than the Bruins, who possess one of the best starters in the conference and a more-than-capable backup. Garbers will assuredly ride the bench as long as Thompson-Robinson remains healthy, but he’s a starting-caliber talent who performed admirably in the crucible of Rice-Eccles Stadium during his lone start last season. In fact, UCLA goes three deep with competence: Griffin nearly won in Autzen Stadium in 2020.

2. USC
Projected starter: Caleb Williams (from Oklahoma)
Projected backup: Miller Moss
Comment: The Trojans enter 2022 with one of the most talented quarterbacks in the land. Williams not only tossed 21 touchdowns in his first and only season at Oklahoma, he rushed for six touchdowns and more than 400 yards. If he’s injured, it could get dicey. Moss was a four-star recruit who had numerous high-level scholarship offers, but he played in one game — the season finale — and attempted just 13 passes. Still, the redshirt freshman is a better Plan B than exists at many schools.

3. Utah
Projected starter: Cameron Rising
Projected backups: Ja’Quinden Jackson, Bryson Barnes
Comment: We’re hesitant to place much stock in a single performance … unless it’s the final 10 minutes of the Rose Bowl against Ohio State. Barnes’ poise and efficiency in place of the injured Rising during the tense finish would suggest the Utes have a solid backup plan. And Jackson, whose career began at Texas, could provide a second option. And Rising, of course, is one of the league’s best starters. The Utes are well-stocked everywhere in 2022, including the quarterback spot. 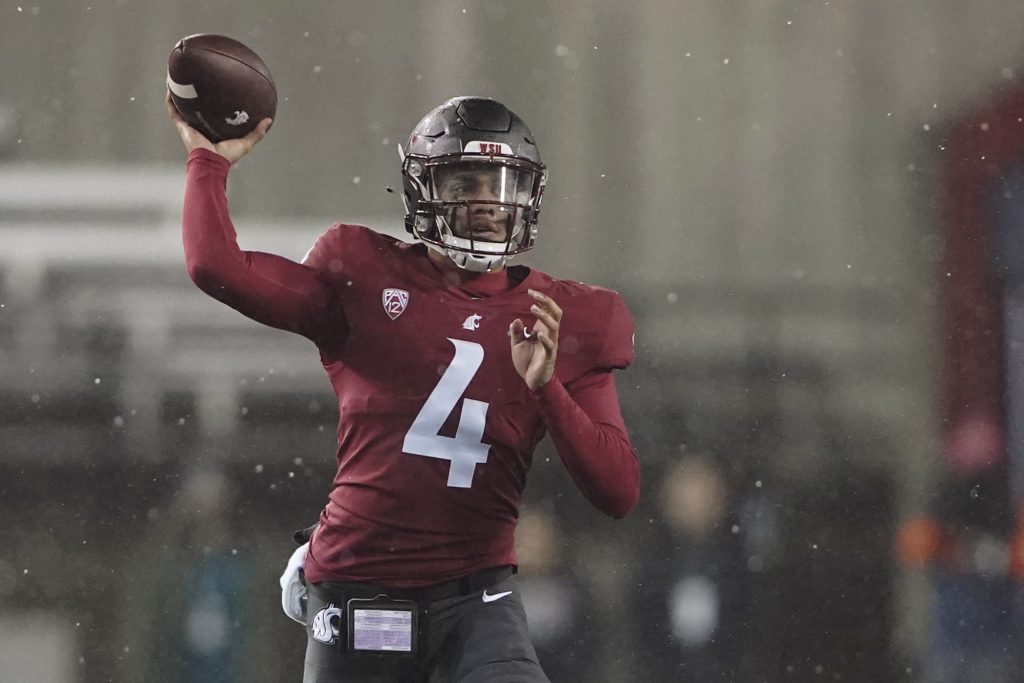 Projected starter: Jayden de Laura (from Washington State)
Projected backups: Jordan McCloud, Will Plummer, Gunner Cruz
Comment: The Wildcats were a complete mess last season but enter ’22 with depth that most other teams would love. De Laura played at an all-conference level for the Cougars and should make a smooth adjustment to Arizona’s system, while McCloud stands as one of the top backups in the conference. He was just getting comfortable — and providing Arizona with a viable option — when he suffered a season-ending leg injury.

5. Oregon State
Projected starter: Chance Nolan
Projected backups: Tristan Gebbia, Ben Gulbranson
Comment: Like Utah and Stanford, the Beavers’ projected starter for next season was not the starter for the ’21 opener. Nolan made the most of his opportunity in place of Sam Noyer and has a fairly firm handle on the job. We wouldn’t be surprised if coach Jonathan Smith dips into the transfer portal after spring practice, but OSU will most likely enter the fall with the three mentioned above — a solid lineup given that Gebbia was the 2020 starter before suffering a serious leg injury.

6. Oregon
Projected starter: Bo Nix (from Auburn)
Projected backups: Ty Thompson, Jay Butterfield
Comment: One of the most interesting competitions in the conference will unfold in Eugene, where a multi-year SEC starter duels with a touted former recruit, Thompson, who’s in his second year in the program but his first with the current coaching staff. It’s a delicate situation for new coach Dan Lanning because of the potential for Thompson to transfer if he doesn’t win the job. And it’s not like Nix was been a model of consistency at Auburn. Expect Lanning to let the competition play out until the last minute, if possible.

7. Washington
Projected starter: Michael Penix Jr. (from Indiana)
Projected backups: Sam Huard, Dylan Morris
Comment: Good chance the UW depth chart changes by the late spring, with Morris potentially on his way out of the program if it becomes clear that Penix is the frontrunner. (We believe Huard will stay and potentially embrace the chance to play the backup role in ’22.) Given that Penix worked with coach Kalen DeBoer at Indiana, the scheme should suit his skills. However, his history of injuries gives us pause. It’s easy to see Morris leaving, Penix getting injured and Huard as the only option one year before he’s truly ready.

8. Stanford
Projected starter: Tanner McKee
Projected backups: Ari Patu, Jack West
Comment: We project McKee as one of the top two or three quarterbacks in the conference next season, if he manages to stay healthy with a thin frame and mediocre line. The issue for Stanford is what lies behind McKee. West was ineffective as both a starter and reserve, while Patu attempted just 16 passes in his rookie season. The Cardinal is a classic QBCQ situation: No worries whatsoever about the state of its quarterback play, unless there’s reason for panic. 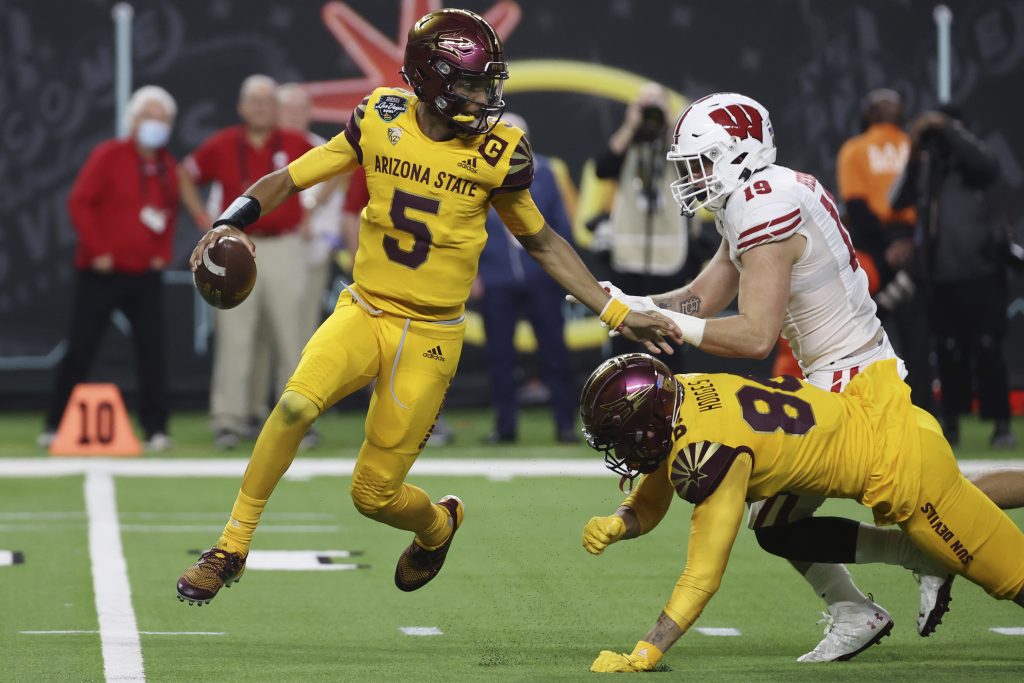 Projected starter: Jayden Daniels
Projected backups: Trenton Bourget, Paul Tyson (from Alabama)
Comment: Tyson is a former four-star recruit who threw 16 passes in a reserve role for the Crimson Tide last season. He’ll join Bourget, who is entering his fourth year in the program, to provide options in case Daniels is injured. Our lukewarm assessment of ASU’s quarterback room also reflects Daniels’ stagnation. In his third season as the starter, he threw 10 interceptions and seemed less comfortable in the pocket than he did as a freshman.

10. Washington State
Projected starter: Cam Ward (from Incarnate Word)
Projected backups: Victor Gabalis, Xavier Ward
Comment: Fascinating situation in Pullman, where the Cougars lost a high-level quarterback to an intra-conference transfer but might be better off for the trade (a win-win for both WSU and Arizona). Ward spent the past two seasons running the system at Incarnate Word (under former coach Eric Morris) that will be employed by WSU (under new offensive coordinator Eric Morris). That said, the move to Ward carries some degree of uncertainty. And behind him, only unproven options exist.

11. Cal
Projected starter: Jack Plummer (from Purdue)
Projected backups: Kai Millner, Ryan Glover, Zach Johnson
Comment: If it’s possible for a quarterback room to be better than initially expected while also packed with uncertainty, Cal hit the mark. Plummer’s arrival as a grad transfer with two years of eligibility remaining provides a veteran option to replace Chase Garbers. But his mediocre success at Purdue — he was benched midway through the ’21 season — is reason for skepticism about the overall quality of play. His competition should come from Millner, who did not take a snap last fall.

12. Colorado
Projected starter: Brendon Lewis
Projected backups: J.T. Shrout, Maddox Kopp (from Houston), Owen McCown
Comment: The number of options listed reflects the extreme uncertainty CU faces. Lewis was erratic in 2021, his first year as a starter. Shrout might have been an able replacement but missed the year with a knee injury. Kopp arrives from Houston with no experience, while McCown, the son of NFL quarterback Josh McCown, was a three-star recruit. No depth chart in the conference has greater potential for substantive change over the next six months. The state of the Buffaloes’ QB room on Sept. 1 is anyone’s guess.

Hotline Mailbag – Options if the Pac-12 raids the Big 12, The Apple-12 Conference? 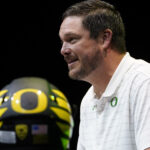