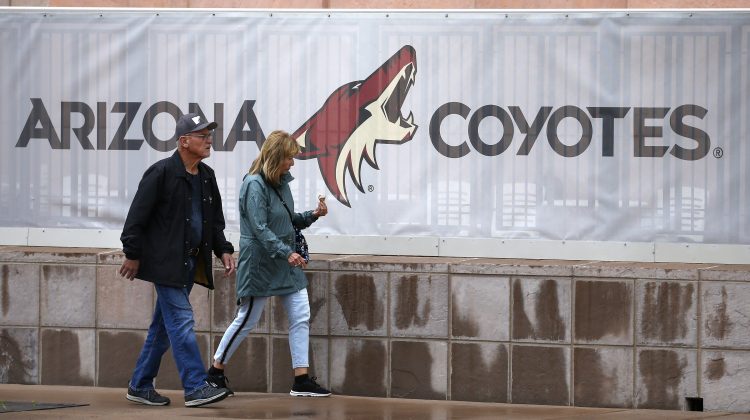 After weeks of rumors and speculation, the Arizona Coyotes confirmed the worst-kept secret in hockey on Monday – that they will move into Arizona State’s new 5,000 seat multi-purpose arena for at least the next two years.

The announcement put to rest any notion that the franchise would move out of the desert following the end of its lease at Gila River Arena, which expires at the end of the current NHL season. Coyotes President and CEO Xavier Gutierrez repeatedly expressed his excitement about the team’s long-awaited move to the East Valley at a media availability on Monday afternoon, .

“From day one, we told the city (of Tempe) that we wanted an interim solution while we figured out something more permanent,” he said. “This is a new facility. We’re not putting lipstick on a pig here. It’s a state-of-the-art, brand-new facility.”

While Gutierrez was ready to brag about the move to anyone who would listen, not everyone is so thrilled about the idea of an NHL franchise playing in a college arena that is minuscule by NHL standards. NHL commisioner Gary Bettman publicly supported the Coyotes’ decision at the NHL All-Star game on Feb. 5, but the NHL Players Association expressed concerns about the financial implications of the move.

NHL players currently pay 17.2% of their salaries in escrow – money that is used to ensure a 50-50 revenue split between players and owners. Escrow payments were set to decrease to 10% next season, but the NHLPA believes that the Coyotes’ move to a smaller arena could cause ticket revenues to drop, thereby jeopardizing the decrease in escrow. Even if the Coyotes manage to sell out every home game in 2022-23, their average attendance figure will still be significantly smaller than the 11,861 fans they are averaging this season at Gila River Arena, which seems to lend credence to the NHLPA’s misgivings.

Nonetheless, Gutierrez dismissed the union’s concerns, and suggested that playing in a smaller building would actually increase demand for tickets. He also cited the arena’s location and proximity to the bulk of the Coyotes’ fan base as reasons to believe that the move would be financially beneficial to the franchise, and therefore, the league.

Committed to the Valley. 🌵

We’re excited to play in the heart of Tempe at ASU’s new multi-purpose arena and continue to show everyone why hockey belongs in the desert. pic.twitter.com/i0RwYX3R2m

“A lot of that commentary really comes from a lack of information and misinformation,” he said. “By all accounts, there will not be a material financial impact in us moving here. By some of our analysis, we’ll be much better off (than we were at Gila River Arena). Every seat is now a lower bowl seat, and there is now the opportunity for us to have every seat be at or slightly above the NHL average (price). We are now going to have a high demand because of the scarcity premium that exists with this facility.”

The Coyotes do have the scarcity factor working in their favor, but filling their temporary home on a nightly basis, let alone turning a profit, remains far from a guarantee. The team has not hosted a playoff game since its Cinderella run to the Western Conference Finals in 2012, and the 2021-22 Coyotes, while likable and hard-working, sit in 31st place among the league’s 32 teams. Couple that with a hike in ticket prices, and it becomes difficult to imagine fans flocking to the new arena on game nights.

About that time. The countdown to the Gila River Arena finale is on. pic.twitter.com/w7IbmxRh4u

Adding further uncertainty to an already murky situation is the fact that the Coyotes will need to commission a $25 million extension to the arena to accommodate extra dressing rooms, as NCAA rules forbid them from using the same dressing rooms as ASU’s hockey team. The extension is scheduled for completion in December, well after the start of the NHL season. If construction is not expedited, the Coyotes could find themselves opening the season with a lengthy road trip, much like the New York Islanders did this season as they waited for their new arena to be constructed.

“It depends on when opening night will be,” he said. “We’re working with (our contractors) for us to be able to play all 41 home games here. We do think we will have some slight changes to (our 2022-23 schedule) but this facility will be open in October and we’re hopeful that we’ll be in there shortly thereafter.”

Ultimately, the Coyotes’ temporary move to ASU’s arena can only be one of two things – it is either the first step towards solving the team’s longstanding arena issues, or the beginning of the end of its time in Arizona. If Gutierrez is correct, and the team manages to sell out games with regularity, the Coyotes will have one more argument in favor of building a long-term home in the East Valley. If not, they will have possibly exhausted their last chance to provide evidence of their long-term viability.