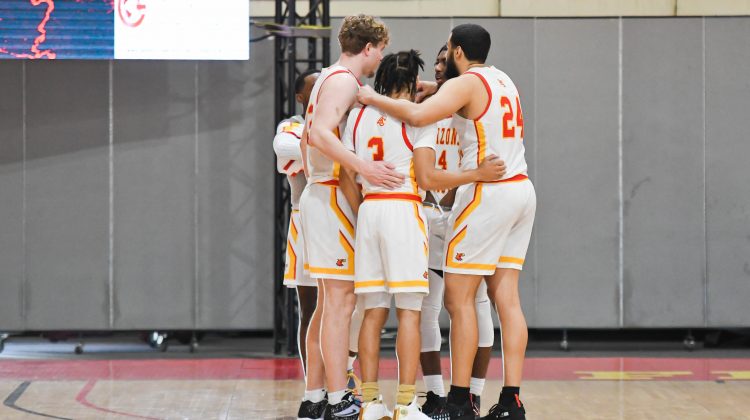 Finishing a 27-3 season with a win over OUAZ, Firestorm head coach Jeff Rutter cut down the net of a hoop at the ACU Events Center to celebrate a second consecutive Golden State Athletic Conference regular season championship.

Ranked No. 4 in the NAIA, and entering as the top seed in the GSAC Men’s Basketball Tournament, the work isn’t over for the Firestorm.

Rutter has been at the helm of the program for a decade and has taken the team to seven NAIA Tournaments, a GSAC Tournament championship, and now, two regular season titles. He says this year’s squad is unique due to their depth and defensive ability.

“We’ve always had a deep team, but this year is probably the most. We’ve got 10 to 12 guys that I think are good enough to be starters at our level and are very good players,” Rutter said. “We’ve truly got a different guy every night that can kind of carry the load on offense, and so that probably makes it difficult to prepare for us.”

In addition to the tournaments and titles, Rutter is also proud of his team’s 42-0 record against Arizona schools in official games.

Rutter and his staff made the commitment to recruit players who understood the program’s culture and bought into what they’re building. He says the athletic department’s support of students spiritually, athletically and academically has grown character and helped the program trend upwards in recent years.

“We talk about how tough, smart, and unselfish are our core values. We talk about that almost daily,” Rutter said. “We want to recruit guys who have those character traits, and then we spend the entire year talking about it and trying to build it through the adversity and lessons that a season can give you.”

One of those lessons came early in the season, when a long road stretch and poor offense gave the Firestorm two of their three losses. The team placed their focus on understanding shot selection and being disciplined enough to seek out rhythm in the middle of a possession. Paired with their ability to rely on their defense, the team went from 7th place in the conference to finishing the season on a 10-game win streak.

On Tuesday, Rutter was named GSAC Coach of the Year for the second straight season. He says the award is a reflection on his assistant coaches and players and their ability to prepare and gameplan for opponents.

Joining him in the accolades were seniors Angelo Johnson and Robby Wilson, who made the All-Conference Team. Johnson also won Defensive Player of the Year, leading a trio of guards who excelled at pressuring the ball without giving up drives.

After leaping to the top of the standings in the final two weeks of the season, ACU is entering the GSAC Tournament as the top seed, and received a first-round bye. Since there wasn’t a tournament last season, the Firestorm are the defending champions after winning it as the 4th seed in 2020.

Game one is a matchup with ninth-seeded Westmont College. ACU split the season series against them, with both games ending in a score of 82-80. The last time the teams met in the tournament the Firestorm dropped 100 points on the then-top-seeded Warriors on their home court. The game is one of Rutter’s most fond memories at ACU.

“Westmont is much better than their record shows…they’ve really only played with their whole team for two games,” Rutter said. “We’ve had a good little back and forth the last few years. I’m sure tonight will be the same.”

The game tips off Thursday at 6 p.m. from Darling Pavilion in Fullerton, Calif. After the conference tournament, Rutter and the Firestorm will switch their attention to making a run at a national title in the NAIA National Tournament.