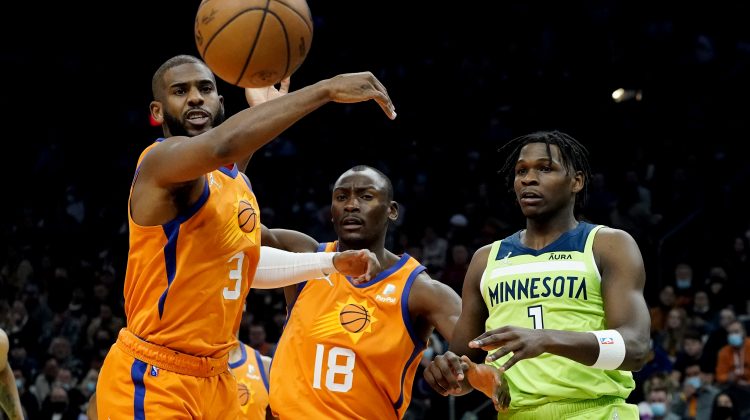 The Suns have the best record in the NBA (39-9) and are riding a nine game winning streak after beating the Timberwolves 134-124 on Friday night.

Phoenix currently has the third best odds to win the NBA title according to DraftKings (+600). The Nets (+250) and the Warriors (+475) are the two favorites.

That means a championship is realistic for this team. However, some moves could be made to solidify those chances ahead of the trade deadline on February 10.

One issue that was slightly exposed in recent weeks is Suns players often pass up open shots. Obviously the goal is to look for best shot, but teams with good athleticism all around can clog passing lanes and force more turnovers.

With the depth the Suns do have, there isn’t a move that will drastically change the balance of power. Especially since the peak of that power is in the hands of the Suns, teetering with the Warriors in the West. Here’s a few moves that could be made to bolster the flow of the roster, without messing up too much of the chemistry.

The only two players that make sense to trade away in these deals are Dario Saric and Jalen Smith. Saric is a fan-favorite, but his contract is pricey and he won’t return until April at best. To balance that out, a team would likely want Smith and a draft pick as well. The Suns can’t deal a first-rounder earlier than 2024.

Over the last few months, Smith has raised his trade value slightly due to productive performances in spot starts and off the bench. Since the Suns declined his third-year option, he can be a free agent this offseason.

The reason it makes sense to deal him, if the roster is healthy, is simple. The Suns now have three effective centers in DeAndre Ayton, JaVale McGee and Bismack Biyombo. Smith is playing a lot at the five while Ayton and McGee are out, but he would need to find a way to be better as a four.

A proven commodity like Thaddeus Young, Serge Ibaka, or yes, Torrey Craig makes so much sense. All three of them would be valuable as a ninth or tenth man, with the ability to play big minutes when injuries happen. Plus when the Suns do face the Warriors in the postseason, they’ll need smaller forwards who can play defense and fill in at the five to counteract the shooting of Golden State. Mikal Bridges, Jae Crowder and Cam Johnson could all do that, but a fourth player in the role would be valuable.

If James Jones doesn’t want to add a four, he could look for more scoring in the backcourt. It sounds insane, but could actually make sense. Cam Payne hasn’t been the same this year. It could be regression to the mean or it could be nagging injuries, or both. If he can’t be the “spark” guard off the bench then another option may be desirable.

The best option could be Eric Gordon in a deal with the Houston Rockets. He’s a proven scorer who won’t pass up shots and isn’t afraid of big moments. The Rockets are in a rebuild and should look to capitalize on his resurgent season.

Those players would all make the Suns slightly better. No deal seems to be necessary at this point, but deadline deals for the right players often lead teams to championships.