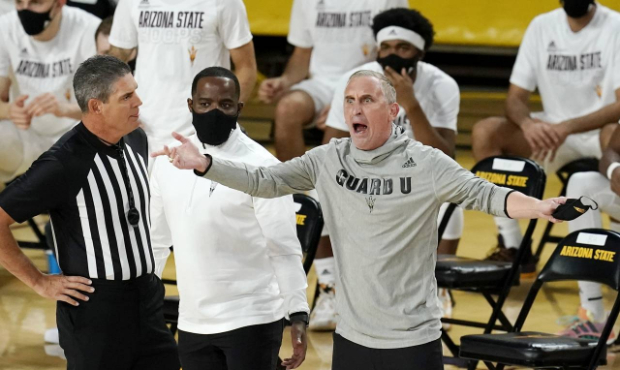 Bobby Hurley and Arizona State basketball may need to push reset on each other at the end of this current season.

I’m not suggesting Hurley should be fired. Far from it. On the outside looking in, he’s done about as good a job as you could hope given the building he’s attempting to convince players to play in. Yes, the facility that turns 50 years old in 2024. The facility that hosted an Elvis Presley concert in 1977.

It’s the 500lb weight shackled to the coach’s ankle that no one wants to address. 50…years….old…If you think recruiting to a building isn’t a big deal, you’re clearly out of touch with present-day college basketball. What makes the dilapidated facility situation worse is that the sparkling new arena for hockey, just around the corner from the 50….years….old….building, will be up and running this year. It’s excellent having hockey, but ignoring the barn that men’s and women’s basketball and volleyball play in has turned into a big mistake.

Hurley has been waiting for a new building since coming on campus. It keeps getting put on the back burner with expectations that basketball will keep on growing as it did under Hurley in his early years(remember the Kansas victory four years ago?) Top players in basketball and volleyball want facilities. No one refers to the current arena as “iconic.” When I bring this topic up to my ASU alums and big cigars, they say “that place needed to be replaced when I went to school.”

You can talk all you want about Hurley’s meltdown and suspension at Stanford. Howl at the moon about this year’s record(6-11), and I’ll listen to you, but here’s the cold, hard, fact, when he came to Arizona State in 2015, the topic of a new arena was on the front burner once the Sun Devil Stadium remodel was complete. It hasn’t happened; there’s nothing set in stone for it to happen; there’s no complicated timeline to even stick a shovel in the ground. That is a lack of commitment to the head coach from the President’s office. Ray Anderson can take some heat, but if Michael Crow wants athletics to be the Harvard of the West, he wouldn’t have one of his best teachers walking potential students through a classroom about to turn 50. It doesn’t add up.

If the bottom falls out on the current season, then sure, a coaching change should be in the cards. But, perhaps we are starting to get to the point of pushing reset with Hurley and the University going separate ways if the school isn’t committed to supporting him with all of the necessary tools to win big. He’s done his part as best as possible given COVID, one and done, transfer portal, etc. Don’t lay all the blame at his feet; look to the top.