1. Oregon: Uneasy rests the crown. The defending division champions have more questions than they did prior to the 2021 season. How will rookie coach Dan Lanning and his staff develop personnel and navigate the season? Is Auburn transfer Bo Nix the answer at quarterback? Are there enough pieces to offset attrition in the secondary? Also, can they beat Utah? Clearly, former coach Mario Cristobal left a heap of talent behind — the Ducks have the makings of a first-rate defensive front and the best roster in the division. But it’s not exactly a stacked division. Which means the one-eyed team is king.

2. Washington State: Not only do we view the Cougars as the best bet for second place (based on current roster outlooks); we considered picking them to win the North. And why not? They finished second in ’21 despite so much turbulence and have enough returning playmakers to hold their ground in what appears to be a free-for-all division. Success depends heavily on the play of new quarterback Cam Ward, a transfer from Incarnate Word whose skills are well-suited for the so-called Coug Raid. If Ward plays to expectations and the defense doesn’t regress, neither will WSU.

3. Washington: Our assessment of the Huskies begins with the following premise: They were artificially bad in 2021 — meaning, their record was several games worse than it should have been based on the available talent. (All things equal, including the coaching, that was probably a seven-win team.) We expect a new-coach bounce under Kalen DeBoer, but are the Huskies capable of winning more than seven and contending seriously in the North? Of that, we’re unconvinced. There are holes at too many positions — even in the secondary, which has been a longtime strength.

4. Oregon State: There is every reason to believe the Beavers will remain a factor in the North but little reason to believe they can take the next step and rule the North. For all the progress under coach Jonathan Smith, there is more ground to cover to reach the top — too much ground, based on the current roster outlook. The offense has a known quantity at quarterback in Chance Nolan, but will the line remain a force without Nathan Eldridge and Nous Keobounnam? The defense was OSU’s undoing last season, but we don’t see quick fixes on the depth chart for new coordinator Trent Bray.

5. Cal: The team with the greatest chance to produce an upside surprise (based on these projections). Cal was 5-7 last season, with five losses by a touchdown or less. That suggests the difference between another mediocre season and fulfillment of the Bears’ pre-pandemic promise likely will unfold on the margins: a red zone conversion here, a turnover there, and the avoidance of serious injury to a few key players. That said, the quarterback play — Jack Plummer, recently of Purdue, is our pick to win the job — must clear a baseline level of competency. And that’s hardly a guarantee.

6. Stanford: The wheels fell off in 2021, exposing serious deficiencies in talent, speed, depth and physicality. (Other than that, how was the play, Mrs. Lincoln?) Tanner McKee is a high-level passer, but the Cardinal cannot return to respectability without a vastly-improved running game. Defensively, there isn’t much reason to expect an uptick. The transfer portal unquestionably has made life more difficult for academically-oriented schools like Stanford (and Cal, for that matter). To offset the impact, everything else about the competitive operation must be better, including scheme and recruiting.

1. Utah: No-brainer pick for the top of the South based on the returning talent and the deficiencies elsewhere in the division. The Utes will lose key players on the lines of scrimmage, including receiver Britain Covey and linebacker extraordinaire Devin Lloyd. But the offense should be solid with quarterback Cam Rising, tailback Tavion Thomas and tight end Brant Kuithe. 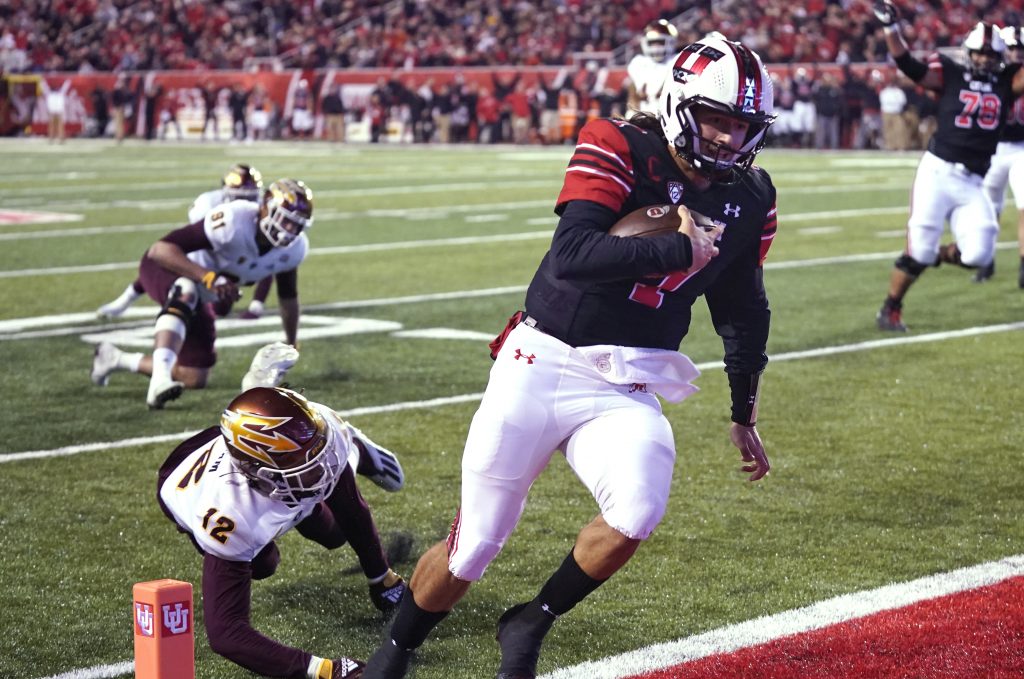 There are plenty of playmakers on defense, particularly in the secondary with cornerback Clark Phillips III and safety Cole Bishop. The Utes have won three consecutive division titles in normal seasons. We like their chances for No. 4 — and for a serious run at the College Football Playoff.

2. USC: The best of mediocre options to finish behind Utah. While we expect an immediate upturn under Lincoln Riley, the size of the bounce is highly uncertain and depends on three factors: Riley’s ability to find a top-tier quarterback in the transfer portal (perhaps Oklahoma’s Caleb Williams); the performance along the lines of scrimmage, where USC has grown soft; and the speed with which a culture of discipline and accountability take root. The Trojans could push Utah for the title or finish several games back. And it might be months before we have more clarity on their fate.

3. UCLA: The Bruins improved significantly in 2021 but weren’t close to winning the division: They finished two games back and were beaten soundly when it mattered (by Utah and ASU). The return of quarterback Dorian Thompson-Robinson and tailback Zach Charbonnet will help prevent a major backslide under coach Chip Kelly, who has a new four-year contract. But the losses in the passing game and at scrimmage are significant (and include line coach Justin Frye jumping to Oho State). We’ll reserve judgment on the wobbly defense until Kelly settles on a coordinator.

4. Arizona: No program has made more progress off the field in the past six weeks than the Wildcats, who gained ground on both Colorado and ASU, particularly at quarterback. Jayden de Laura’s relocation from Washington State to Tucson seemingly guarantees a quality option at the position. (Either he wins the job or someone plays well enough to beat him out.) The Wildcats are two or three seasons from contending for a top-tier finish in the South, and they might not get there — major upgrades are required on the lines of scrimmage. But they should avoid another last-place finish.

5. Arizona State: We initially planned to slot the Sun Devils into fourth place but became more skeptical as the research progressed. Yes, Jayden Daniels is returning, but his lack of progress since 2019 hardly suggests an elite season awaits. The touted receivers haven’t developed, do-everything tailback Rachaad White is off to the NFL, and the line is losing several key pieces. Meanwhile, the veteran defense gets hit at every level, especially in the secondary. Add the uncertain outcome of the NCAA investigation — and the impact it could have on roster reloading — and ASU looks destined for a regression. Much remains to be determined in Tempe.

6. Colorado: The heady days of 2020, when the Buffaloes contended for the South title and Karl Dorrell won Pac-12 Coach of the Year honors, feel like they folded a decade ago. A disappointing second season under Dorrell has given way to significant changes — some for the better, others clearly for the worse. Dorrell has overhauled his coaching staff, but an offense that struggled all year and lacks clarity at quarterback also lost its top playmakers, tailback Jarek Broussard and receiver Brenden Rice. The defense has been hit hard by attrition, as well. The end result is a significant increase in pressure on Dorrell entering his third season.