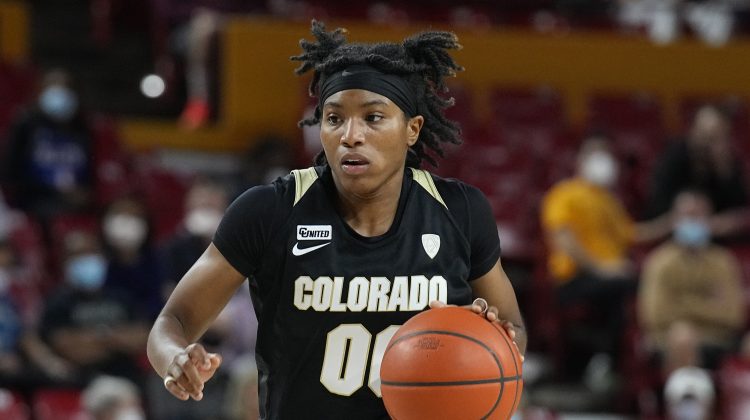 Colorado is the first, but almost certainly won’t be the last Pac-12 women’s basketball team to take a major hit from a makeup schedule.

Coming off their first loss of the season on Jan. 14, following a 13-0 start, the Buffaloes suffered three more defeats in seven days — two of them in overtime. That sent them on a plunge from being the nation’s final Division I unbeaten to a ninth-place tie in the Pac-12 with a 2-4 record.

“We’re the only team in the league being asked to go on the road four times in a row – twice,” Colorado coach JR Payne said. “That’s not easy.

“When you combine that with two overtime losses in a row on the road, those also are not easy. There are a lot of very difficult things, but it doesn’t mean we don’t still have a job to do, and it doesn’t mean we can’t still execute and do what we need to do to be successful.”

The Buffs caught ASU coming off a three-week COVID protocol break while they were playing for the third time in eight days.

“These are one-possession games against teams that have had a week and a half to prepare for us,” Payne said after the ASU loss. “We are a really good team, but we are also playing really good teams.”

The Buffs almost certainly will fall out of the national polls after two weeks at No. 22 (AP).

Their fourth consecutive road game is coming up Friday against Utah. They also play four in a row away from Feb. 11-20 against the Bay Area and Los Angeles teams.

In contrast to Colorado, the past week went swimmingly for Arizona, Oregon, Oregon State, and UCLA — all of them going 2-0, with the Ducks making a case for jumping into the national top 25.

Oregon pulled off a second straight top-10 upset Monday, beating ninth-ranked Connecticut 72-59, then repelled Washington in a 68-61 victory on Friday.

Chanaya Pinto was something of a savior for the Ducks with four points, two rebounds, an assist, and four steals in the fourth quarter against the Huskies. Pinto, a 6-1 forward and native of Mozambique, is a junior college transfer in her first season with Oregon.

The Ducks were much more dominant against short-handed UConn, which used just six players. They led by 24 points early in the fourth quarter with Sedona Prince again coming up big, just as she did in a win over Arizona on Jan. 15.

A sign of Oregon’s scoring depth: Te-Hina Paopao was the leading scorer against UConn with 22 points; then Endyia Rogers and Nyara Sabally scored 23 and 20, respectively, against Washington.

Arizona rewarded McKale Center crowds in excess of 7,000 with calming wins over Utah and Colorado after losses in two of its three previous games.

“This is how we bounce back after a loss,” Arizona coach Adia Barnes said after the Utah game. “That shows character. If we didn’t have the diamond press, we probably don’t win the game. It was very effective. We did a good job turning them over.”

Against desperate Colorado, Arizona trailed 21-9 early in the second quarter then dominated thereafter, pulling even by halftime and winning the second half 46-27.

Sam Thomas had a season-high 25 points for the Wildcats against Utah, then Shaina Pellington and Cate Reese combined for 51 against Colorado.

“Sam’s capable of that every game,” Barnes said of the 6-0 senior forward. “Sam’s the type of player, if she’s 0-for-3, she won’t take the fourth and fifth shot. That’s why I ran the first play for her (vs. Utah). That is the Sam we need and what Sam’s capable of doing.”

Down to seven players with Jaelynn Penn joining a long list of injured, UCLA still swept rival USC, 66-43 on Thursday and 68-58 on Sunday.

Junior guard Charisma Osborne is playing at a high level despite a variety of injuries for the Bruins. She went down with 5:13 left Sunday with an apparent arm injury, only to return 24 seconds later to help ice a road win. She finished with 27 points.

No. 2 Stanford unloads on Cal

The Cardinal was tied 42-42 with Cal at halftime Friday before powering away from its rival for a 99-74 win. The second game of the home-and-home series was postponed due to the Bears’ COVID issues, so Stanford retains sole possession of first place four weeks into conference play.

Freshman Jayda Curry scored a season-high 30 for Cal, but it wasn’t nearly enough when Stanford had three 20-point scorers: Haley Jones (26, plus 10 rebounds), Hannah Jump (21) and Fran Belibi (20). The Cardinal was without guard Anna Wilson due to non-COVID illness.

Utah rebounded from its loss at Arizona with a 72-63 win at ASU. The Utes led 21-4 after the first quarter and 42-13 with two minutes left in the second.

The Sun Devils came all the way back to within six points with 2:12 left before a 3-pointer by Utah freshman Gianna Kneepkens averted a disaster similar to the one that struck three years ago, when ASU scored the final 20 points for a two-point win.

“At halftime, the kids that have been here before talked about,” Utah coach Lynne Roberts said.

“It’s frustrating to come out in the third quarter and not start the way we want to. But you have to give credit to ASU and Charli (Turner Thorne). They have such a great program and culture, I knew they weren’t going to go away.

“I think we made it harder on ourselves than we should have, but they’re a competitive team and a fighting program. I knew it was coming, but I’m proud of our kids for hanging in there. It’s hard to win in this league and really hard on the road.”

Kneepkens scored 20 points, as did ASU’s Jade Loville, who sat out the Colorado game for precautionary reasons due to a sore back.

The Sun Devils still won their Pac-12 opener vs. Colorado after missing six games due to COVID for one side or the other.

Washington State did not play due to COVID, but all other Pac-12 teams got in at least one game.

— Ahead this week: A pair of makeup games – Utah at Oregon, Arizona at UCLA – will be played Wednesday with all of those teams facing three games in five days, including a road trio for Arizona capped by Stanford on Sunday.