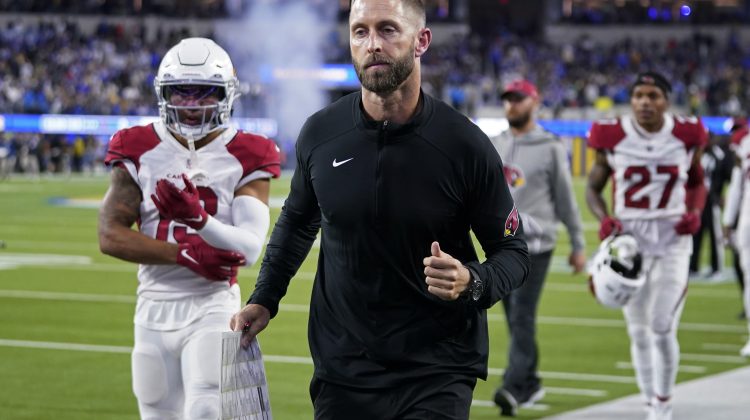 Jordan Hicks aptly described the Arizona Cardinals’ year as “a tale of two seasons.” The Bird Gang was viewed as the top team in football after a 7-0 and 10-2 start, only to end the season on a 1-5 skid with a 34-11 NFC Wildcard loss to the Rams that was a game for about 45 seconds.

Making the jump from five wins to 11 in the span of two years is an impressive trajectory, but midway through the season, the bar had been raise to Super Bowl participant and not double-digit winner.

“We started hot there’s no doubt,” head coach Kliff Kingsbury said. “I think week seven, week eight, you lose (Deandre Hopkins, JJ Watt and Kyler Murray). That obviously makes it tough. I thought we did a good job overcoming adversity. Going 2-1 with (Colt McCoy) winning two big road games in the division and then later on when adversity struck, we didn’t respond as well. But that’s this league and you’re going to face it, you got to find ways to to win despite different things that arise and we got to figure out how to be better at that at the end of the season.”

The Cardinals are still shocked with what happened on Monday night. But when Arizona’s first six drives resulted in four punts and two interceptions – one returned for a touchdown – the Rams rode that momentum to an easy win.

“Going into the game, I think everyone was confident that we had a great plan,” tight end Zach Ertz said. “I thought it was probably the best week of practice we’ve had since I’ve been here going into the game, and we just got hit in the mouth and we’re able to respond and it just kind of snowballed early. At that point against a good team. We had no chance. I don’t I don’t think that result is should put a damper on the progress that we had.”

The offense lacked the firepower it had earlier in the year with DeAndre Hopkins in the lineup along with James Conner and Chase Edmonds fully healthy, and Ertz saw a concerning trend in the back half of the season.

“When you lose football games, it ultimately comes down to execution,” Ertz said. “I think we just had negative plays. We were in a lot of certain long situations and in this league, it’s too hard to do that. You have to be in third and five consistently if you want to have good drives if you want to score touchdowns consistently.”

Steve Keim and company face plenty of questions this offseason. Conner, Edmonds, Christian Kirk, Chandler Jones, Zach Ertz, A.J. Green and Colt McCoy are among the team’s free agents. Hopkins, Watt, center Rodney Hudson and Budda Baker are all seeing increases in their salaries. There are also plenty of vets with one year remaining on their deals that could become cap casualties.

Jordan Hicks requested a trade at the beginning of the year when Zaven Collins was above him on the depth chart from the beginning of training camp. Hicks ended up finding a significant role in the middle of the defense this year and was one of the leaders on that side of the ball. Much is still up in the air, and he isn’t ready to process all of it just yet.

“We’ll see how it all shakes out,” Hicks said. I’m not ready to answer that question.”

The linebacker did express his confidence in both Collins and Isaiah Simmons as two future staples in that position group, whether Hicks was there next year or not.

“They wouldn’t be here if they weren’t,” Hicks said. “At some point, you got to trust it with him whether they’re ready or not, right? As an NFL player, as a professional, you have to do everything you can to get ready. So as difficult as it may be, I was in that position at one point and had to have to figure out a way, that’s just what the job is.”

As for Ertz, the tight end flourished in the Cardinals’ offense after being traded at the deadline from the Eagles. He totaled 56 receptions, 574 yards and three touchdowns in 11 games and become a constant target for Kyler Murray, especially after DeAndre Hopkins’ injury.

He is married to Julie Ertz, renowned soccer player and Arizona native, adding to the allure of staying in State 48 long term.

“I’ve loved my time here in Arizona,” Ertz said. “I would love the opportunity to continue here. Obviously that’s there’s a lot of things out of my control. Got a lot of good players that are free agents as well. So it may not be even up to me. But it’s been a blessing to be able to be here.”

This iteration of the Cardinals have experienced the postseason now. It was a pretty awful experience, but the team’s victories have jumped up each year under Kingsbury, and this offseason will be crucial to determine whether this playoff run was a one-hit wonder or the minimum bar to reach moving forward.