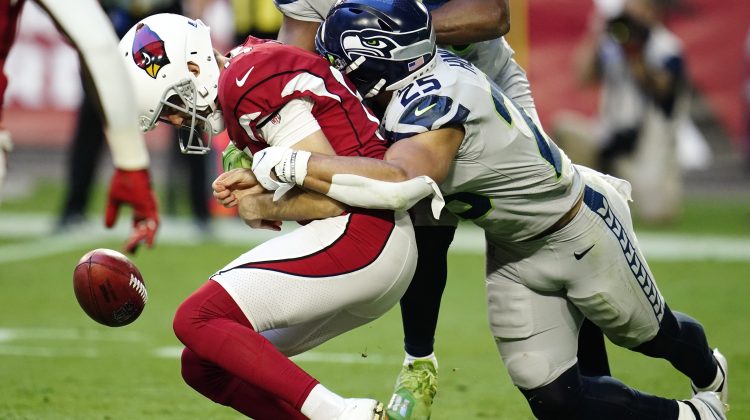 The mission was simple for the Arizona Cardinals: beat the Seattle Seahawks in the regular season finale and hope San Francisco did the same in Los Angeles against the Rams.

Had both of those happened, the Cardinals would have won the NFC West title for the first time since 2015. At the very least with a Rams’ win the Cardinals would’ve entered the postseason riding a two-game winning streak and head back to Dallas confident after beating the Cowboys just last week.

San Francisco got it done in overtime against the Rams. But the Cardinals’ lackluster run defense again reared its ugly head in a 38-30 loss to Seattle. As a result, Arizona will face the Rams on the road in the NFC Wild Card Game next week.

“We would’ve liked to win the division, but we are in the playoffs,” Kingsburry said. We’ll go play them next week and it should be a heck of a game.

“They played like they wanted it more. Have to give (Seattle) a lot of credit.”

The Cardinals’ defense, which has been a catalyst alongside the offense’s inability to capitalize inside the red zone during this slump, struggled again.

A blown assignment by the Cardinals’ depleted secondary led to Seattle’s first score of the game – a 43-yard touchdown pass from Wilson to Tyler Lockett. The two would connect again for a touchdown in the second quarter after Lockett overpowered cornerback Breon Borders near the pylon.

Lockett, who has made it a routine to torch the Cardinals, finished with five catches for 98 yards and two touchdowns. Wilson, who connected with Freddie Swain for his third touchdown through the air after yet another blown assignment by the Cardinals, went 15-of-26 for 238 yards and four total touchdowns – one of which on the ground from 4 yards out after evading pressure.

If that wasn’t enough, Seattle running back Rashaad Penny rushed for 190 yards and had a 62-yard fourth-quarter touchdown against the Cardinals that sealed the victory for the Seahawks.

Cardinals’ safety Jalen Thompson, who had an interception, said the injuries to Robert Alford and Marco Wilson weren’t to blame for the defense’s struggles against Seattle. He said they missed assignments across the board.

“We came out and didn’t do our jobs the way we should’ve,” Thompson said. “I think it’s little stuff. Details. Guys not being in the right place, guys not doing their job. We gotta come out next week and we gotta make those little adjustments to fix everything.”

While the Cardinals’ defense did find some success, most notably Chandler Jones’ strip-sack of Wilson that was picked up by Zach Allen and returned for a touchdown in the opening moments of the game, they couldn’t come up with key stops when needed most.

The same goes for the offense, however.

Arizona’s first offensive touchdown didn’t come until the third quarter when Kyler Murray found James Conner for a 20-yard score. Conner, who returned from missing two games due to injury, scored again after Thompson’s interception in the third quarter to take the lead.

But the Cardinals were held to field goals the rest of the way as they were unable to capitalize in the red zone in the closing minutes of the game. Murray finished 28-of-39 for 240 yards and the lone touchdown. Conner had 15 rush attempts for 52 yards before exiting with a rib injury.

“Me personally, frustrated,” Murray said of his mood after the loss. “They played bend but don’t break defense and we couldn’t punch it in. We’ve gotta be better going into the playoffs.”

Murray went on to add he feels his team recognizes what is at stake moving forward in the postseason.

“I think everybody realizes it’s a new season and nothing in the past matters at this point. I think that’s the focus,” Murray said. “You have to go 1-0. You’re one-and-done if you don’t win. I think the guys understand that. But obviously, after losing, it’s definitely frustrating.”

Murray and company said they weren’t aware of the outcome of the Rams-49ers game until they had gone into the locker room. He admitted to a missed opportunity to win the division.

But there is a silver lining to Sunday’s outcome. The Cardinals are 8-1 on the road this season – the best road record in the NFL. The last time they faced the Rams in Week 4, the Cardinals exited SoFi Stadium with an astounding 37-20 win.

Kingsbury said the team isn’t going to bank on that outcome for what will happen next weekend in Los Angeles. But he recognizes there needs to be a new sense of urgency among the team in a one-and-done situation. He hopes that will come in practice this week.

“It’s a new season,” Kingsbury said. “We understand it’s one-and-done. It’s backed against the wall for everyone. I expect our sense of urgency to be a lot greater when we show up in L.A.”