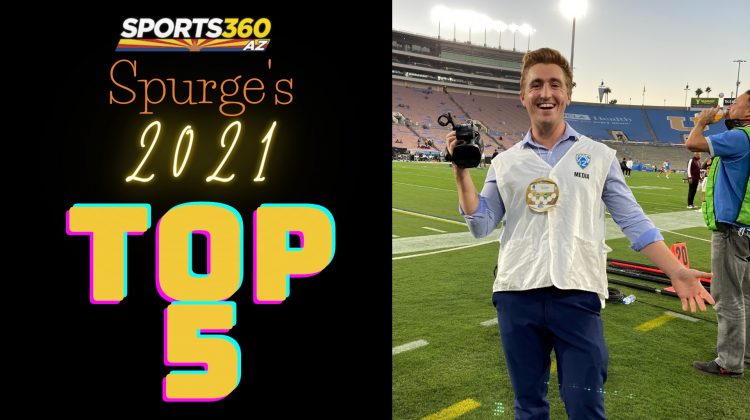 2021 really flew by here in the valley. The Suns made a Finals run. The Cardinals are heading to the postseason. ASU and Arizona football both at least had interesting storylines to follow coming off a COVID-19 plagued season and a new coaching regime, respectively. High school football was back to “normal.” There is always something happening in the Arizona sports world, and 2021 was no exception.

For me personally, I completed my first full year at Sports360AZ, after being an intern in August 2020 and hired on staff in November 2020. I’ve seen so much growth personally (graduated from ASU this December) and I’ve seen this company grow exponentially. I’m proud to be here telling stories.

Since today is the last day of the year, I decided to reflect on some of our top stories as a company from 2021. Because that’s what we do. We share stories.

5. Phoenix Is A Suns Town, Last Night Showed It

Since I’ve been here, Brad has always told me Phoenix is a Suns town. I believed him, but being a California native, I never really knew how much people rallied behind the Suns. I guess when you see mediocrity for awhile, those feelings can get lost. I saw them first hand on one of my night’s off actually.

For Game 4 of the quarterfinals against the Denver Nuggets, I watched the game at a bar in Gilbert with my friend and their family. I actually wrote a game story from my phone there because Brad ended up having to deal with something else. Then my friend’s family invited me to go to the airport with them to watch the team plane land. I had no idea what I was in for at Phoenix Sky Harbor. People waited by the gates for hours until well after midnight. All just to see the players driving off in their cars. It was a really special moment.

Phoenix Is A Suns Town, Last Night Showed It

I like to have fun. Sports reporting doesn’t always need to breakdown x’s and o’s. So when the Suns were in the Finals I couldn’t help myself. Before the game I bought a mini hoop and decided to bring it outside the arena with me in case the Suns won. They did to take a 2-0 series lead, so fans were eager to dunk on camera with me.

What can I say about Bleacher Talk? It’s so much fun! The idea of this show started with a conversation with Brad. Claudia Collins and I were on board immediately. When we began discussing ideas for segments, I knew were going to have something special. We even were able to bring in the legendary Bruce Cooper to pick games with us every week (Spoiler, I won this year).

Originally we planned to do our show live, but in the virtual world it’s difficult to do that sometimes. But we were able to do two live shows at luncheons during the final week of the regular season. Those were a blast.

However, I chose to highlight our Open Division Preview Show. This show aired on Bally Sports Arizona that week in place of Brad Cesmat’s Football AZ. I think it’s a giant accomplishment to not only get a show like this off the ground but to have it air on tv in the same season is amazing. We shot it at Liberty High School, with loads of help from Chris Peterson and Devon Henry. We spoke with four coaches from the Open Division playoffs, and Jordan Hamm joined us for some Recruiting Talk, which he always nails.

Also I wanted to shout out Eliav Gabay. He joined our team a few months ago and has been killing it as our Bleacher Talk editor. He made this show so much easier to host.

Have I said that I like to have fun? On Pac-12 Media Day, Brad flew myself, Claudia, and Chris Peterson out to film stuff in Hollywood. Claudia and I arrived at 9 a.m. that morning. I saw the Ping Pong table right next to where Brad was set up and knew I needed to play with Chase Lucas. So I bugged Connor Smith at SDA a few times throughout the day and we made it happen.

I obviously wasn’t here when Lucas played at Chandler high school or most of his ASU career, but every time I’ve chatted with him I can sense his passion for football and his team. He’s going to be drafted somewhere this year, and I think he will find a way to make an NFL roster. He’s got the talent, the joy, and the grit to do so. He may need to work on his ping pong skills though.

I have to agree with Claudia here, this was the most rewarding story I’ve ever worked. Not because of the praise it receives or the future accolades it may win, but because we told an important story and we did it the right way. When Brad asked myself, Claudia, and Devon Henry to attend an event with him that Christian McCaffrey would be present for, we had no idea what we were getting into.

Doug and Shannon Hoffpauir are amazing people and I’m glad they trusted us to share the story of their son’s life. There’s so much to his story that it was really difficult to fit it all into a 21 minute documentary. If you watch one story from this article, it should be this one.

Part of what makes me want to stay at Sports360AZ is the work of my teammates. Despite only meeting some a few times, I feel pretty close to all of them. They’re amazing storytellers and even better people. That’s an environment that breeds success. This list might not be in order, but I do want to highlight some of the great work they did.

If you have any interest in NASCAR and/or any kind of motor sport racing, you MUST be following Devon Henry. I’m not sure he ever sleeps because he’s always covering this sport or doing virtual races, on top of other stories in other sports. I’m so glad that he was able to produce a full NASCAR tv show during championship weekend at Phoenix Raceway. It was cool to be a small part of it as well.

He did so many cool interviews all year long as well, but this show has it all.

4. On the Rocks – Water Wheel Falls

Claudia gets to hike for “work.” It’s pretty freaking cool! Her On The Rocks segment is always so cool. I have a full list of places to hike in 2022 because of all the trails she’s showed off in this series so far. I chose this one because it’s near the top of my hiking list.

True story, the first time I met Claudia was when she wanted to meet up for coffee to get a little bit of help with the cover graphic. I didn’t really do much, I could tell that she was going to CRUSH this series just by the ideas she had for it.

This such a COOL weekly segement we have. Bruce Cooper and Chris Peterson are an ELITE team who go out and tell the best stories they can every single week for Friday nights. This one is interesting because I’ve never seen a story about the video team for a high school football team. It’s an important job and it’s great to see them get some love.

2. Zaven Collins: A Good Guy From The Middle Of Nowhere

Working on a documentary with three people was a lot of work. How Jordan Hamm did this on his own is beyond me. He did such an epic job telling this story by travelling to Hominy, Oklahoma to speak with so many people from Zaven Collin’s life. He’s having a pretty good rookie year so you may want to learn more about him by watching this.

Brandy Aguilar and her team crushed this documentary. Brandy is our special projects person who is amazing at what she does. Side note, she’s also the one who ordered our shirts and mic flags so she’s the best for that.

I went out to help with this documentary for one eight hour day at Brophy high school. I believe there were like 20 different interviews in two different locations of the school. Despite hours and hours of footage, Brandy was able to compile everything and tell the story of Brophy Soccer. If you haven’t seen it yet, you’re missing out.