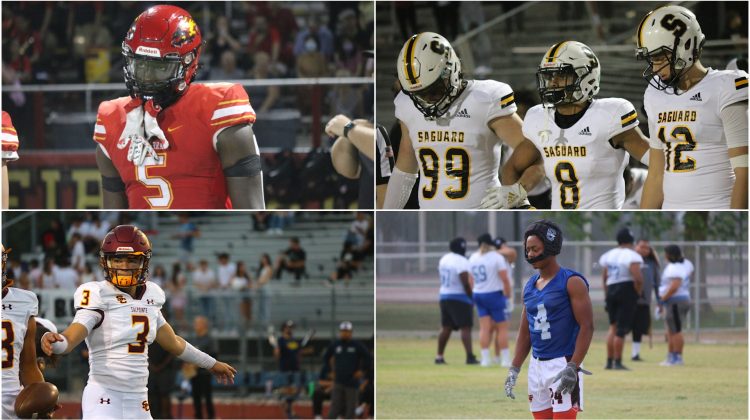 We are just days away from the Arizona high school football season being wrapped up with big schools playing their state championship games on Friday and Saturday.

I had a chance to get caught up with a few 2022 players who have not committed yet at the AIA’s state championship media day.

One note before we jump into these updates:

The growing sense I get from more and more Division I-level uncommitted players is many of them will wait until February’s signing day before putting pen to paper. With deferred eligibility due to the 2020 COVID season, more players than ever entering the transfer portal and coaching changes and ensuing decommitments occurring left and right, the recruiting landscape is murky for some players. A clean reset of the board will provide clarity and could benefit a player that hasn’t put in their verbal commitment yet.

If you remember the first few years of the early signing day, the overwhelming majority of players signed early, especially if they had alreday verbally committed somewhere.

Let’s get caught up with a few players:

It’s been a wild few weeks for the top player in the state. The Under Armour All-American has seen quite a few of top programs visit him in recent days including Alabama & Nick Saban, new head coach Marcus Freeman for the Notre Dame Fighting Irish and Chip Kelly of UCLA.

Thank you to coach Saban and @CoachSvoboda for spending time with us @AlabamaFTBL #RollTide pic.twitter.com/SpIWXKgHxg

“They’re talking about what they can do for you to set you up for the rest of your life, not just in the aspect of them needing you to play football for their school and what it took for them to get to where they are.”

As it stands right now, Lucas says he’s still unsure whether he will announce a commitment on early signing day next week or make a silent commit and announce his decision at the Under Armour All-American Game in January.

It’s been a whirlwind juggling the Firebirds’ championship run, his recruitment, finishing out his semester and his home visits.

“It’s been a ride but I have to keep my head down this week,” Lucas said.

Lucas has been well-traveled with his family and defensive coordinator Derrick Nsubuga, checking out multiple campuses last summer and this fall. While there’s plenty of things to weigh while on a visit, I got down to the hard-hitting questions when it came to his visits: What is the best food you ate?

“At Alabama, there’s a Jamaican place that’s by the staidum, and then at LSU, there’s some of the gumbo.”

While his options span the country and multiple conferences, it sounds like his stomach is in the SEC.

But Lucas knows he and his Firebirds have a big task to get to before Saturday.

“(We need to) communicate and make sure that we know what we’re doing to prepare to get ready for this game.”

You never know who is watching.

Chandler defensive back Alfred Smith has been rock-solid for the Wolves this year. While he’s picked up offers along the way, his first Power 5 offer came from a strong performance against Liberty in the Open Division semifinal game. Former Texas Tech defensive coordinator and current Abilene Christian head coach Keith Patterson was in attendance and was so impressed with Smith and safety Franky Morales, he urged the coaching staff to offer them.

“They called me Sunday night after the game, and I was shocked. I didn’t expect that at all,” Smith said. “(Coach Patterson) was at the game. That’s a big opportunity for me, for my family, so I appreciate that.”

Smith was thrilled for the opportunity, but even more excited for Morales and the prospect of them teaming up again.

“That would be awesome to go play with him again at another school,” Smith said. “That’s definitely something we’re thinking about right now.”

Smith has 44 tackles on the year along with three interceptions and nine passes defended. The Chandler Wolves are set to take on the Saguaro Sabercats in the Open Division Final.

Before getting into Jacobs’ recruitment, I had a realization a few weeks ago: In my opinion, Jacobs is pound-for-pound the toughest guy to tackle this year. While he may not be the biggest guy on the field, defenders often slide off of him when making contact for a guy his size. If a play is going to end with him on the sideline, it’s often times because he got pushed out of bounds, not necessarily tackled.

@_javenjacobs 97 yards to the HOUSE 😤 ya’ll better come snatch him up while he’s still available 💯 https://t.co/tVMbGjf7vE

The do-it-all Sabercat said ASU, NAU and Yale are recruiting him hardest right now, and he’s hoping to get some more clarity after taking some visits at the end of the season. At this time, he plans to sign in February and will take visits once the season is completed. He already has a visit to Yale on the books and will get back to ASU’s campus in the coming weeks. Now that the coaching staff is seemingly settled for the Sun Devils, it’s been a clearer picture for Jacobs.

“I feel like they’ve been doing a really good job recruiting me,” Jacobs said. “Honestly, they were the first school to believe in me and extend that offer. It’s going good with them.”

The Salpointe Catholic quarterback has been patient throughout the entire recruiting process and has plenty of potential options as things shake out closer to February. He added an offer from BYU this summer and the Cougars are viewed very highly by Bourguet. There are also a few interesting dots to connect with other potential destinations for him.

Northwestern has yet to offer Bourguet but both sides have been in contact for months now, and he visited the campus this summer. The Wildcats’ commit Bennett Meredith de-committed from the program recently – potentially to flip to Arizona State – and an opportunity could be there for Bourguet.

Fresno State has also been in contact with Bourguet over recent months. Former head coach Kalen DeBoer just made the move to Washington, where their quarterback commit Jackson Stratton decommitted on Tuesday.

Arizona State has also been in conversation with him, and his older brothers Trenton and Coben are currently on the roster. While Colorado has a quarterback commit in the 2022 class, they could add a second commit at the position, especially depending on what direction they head for their new offensive coordinator.

If one of these opportunities becomes an offer, Bourguet could pull the trigger. That patience he’s showed during a process where he has very little control could pay off over the next few months.

There’s a lot going on on the recruiting trail, but right now these playmakers are looking to handle business on the field this weekend.