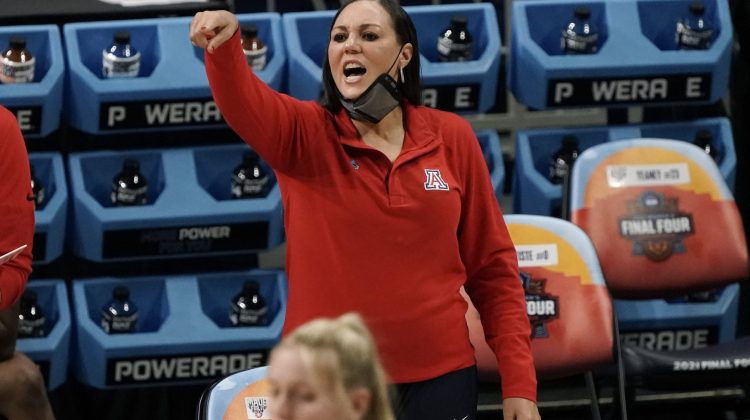 The Pac-12 has been good over the first five weeks of the 2021-22 women’s basketball season, but not great by its own perhaps unrepeatable standard.

Stanford and Arizona, the defending NCAA champion and runner-up, respectively, are in the top 10 of both major polls.

After that, no team is ranked higher than No. 20.

A year ago, after approximately the same number of games in a season impacted by COVID, Stanford was No. 1 and UCLA, Oregon and Arizona were also among the top 11 in the Associated Press rankings.

Ultimately six Pac-12 teams made the 2021 NCAA Tournament, with Stanford (a No. 1 seed) prevailing 54-53 over Arizona (No. 3) to become the conference’s first national champion since the Cardinal won it all in 1992.

The Pac-12 had been pounding on the title door since 2016 and had a prime 2020 championship contender in No. 2-ranked Oregon during Sabrina Ionescu’s final season, which was cut short by COVID.

In fact, the Pac-12 leads all conferences since 2016 with six Final Four appearances, as well as NCAA Tournament wins (70) and winning percentage (.707).

Big picture, the Pac-12 is well positioned to win another national title soon — certainly much sooner than the 29-year gap between Stanford’s championships.

But whether the No. 4 Cardinal, No. 6 Wildcats or another conference team (Oregon or UCLA, if fully healthy?) will reach Minneapolis for the Final Four is a story still three-plus months in the making.

UConn too much for UCLA

Both teams were missing key players due to injury in what, somewhat amazingly, was the first women’s college basketball regular-season game televised nationally on ABC.

Bruins guard Charisma Osborne made a career-high seven 3-pointers and scored a game-high 26. But UConn averted a second consecutive loss, something that hasn’t happened since 1993, with runs of 14-0 and 11-0 in the second half. All five Husky starters scored in double figures, and Dorka Juhasz pulled 16 rebounds to match her 16 points.

“It’s such a mixed bag for me right now,” UCLA coach Cori Close told reporters after the game. “Really proud of some areas of our team that stepped up and fought and grew. Then really frustrated with those inches kind of plays that are under your control that your let slip away.

“The pain of regret is no fun, but it’s only redemptive if it changes you, if it creates habits, shows what you can become and what it takes to go where you want to go.

“We didn’t come here for moral victories. Those days are past for UCLA basketball. We’ve got to face the pain of what made this game slip through the cracks.”

— Stanford, which played Sunday for the first time since Nov. 27, dominated Pacific 91-62 behind sophomore Cameron Brink’s double-double (a career high 25 points, plus 11 rebounds).

— Arizona pulled away from New Mexico in the second half Sunday for a 77-60 victory. The Wildcats are 9-0 for the second time in three seasons and fourth time ever. However, sophomore forward Lauren Ware is out with a dislocated knee suffered Thursday.

Arizona State’s three-game win streak ended Sunday with a 69-62 loss at Creighton. Still, the Sun Devils, now 5-5 after a 2-4 start, are benefitting from the return of forward Jayde Van Hyfte.

Van Hyfte missed all but one game last season, when she would have been ASU’s only returning starter from 2019-20. Her absence was substantial on a team forced to start three freshmen, two of them post players. The Sun Devils went 12-12 as their school-best, six-year NCAA Tournament streak ended, although they did play in the WNIT.

“It was difficult for me to go through another (knee) surgery,” Van Hyfte told the Hotline.

“I’m usually the type of player that tries to push through on things. But I knew I wouldn’t be able to help my team the way I wanted to, and I would be in pain. I told Charli (Turner Thorne) I’ll try, but after the first game I was like I don’t think I could sustain this.”

In late January, Chicago Bulls team physician Dr. Brian Cole transplanted meniscus from a cadaver into Van Hyfte’s left knee — the same one he operated on when she tore her ACL while at tiny Annawan (Ill.) High School.

This was her fourth surgery total; it required being on crutches and not putting weight on her knee for two months.

“It was really challenging getting my strength and power back in my legs,” she said. “But my knee feels a lot better than it did before.”

Van Hyfte missed ASU’s first seven games this season to further build her leg strength. She’s started the last three and, even with a restriction on minutes, made an immediate impact with her rebounding and even running the floor in transition. The 6-1 senior’s leadership matters, too, on a young team blending in four transfers.

Van Hyfte has an undergraduate degree and is working on her master’s. She has another year of eligibility (COVID allowance) for that — and to help ASU’s push to return to the NCAA Tournament.

The Pac-12 through Sunday …

— Player of the Week nominees:

— Freshman of the Week nominees:

Stanford visits No. 9 Tennessee on Saturday and Arizona faces No. 11 Texas on Sunday in Las Vegas in feature games. (The Longhorns have already beaten Stanford once this season.) Also, Washington State heads to No. 16 Brigham Young on Saturday.