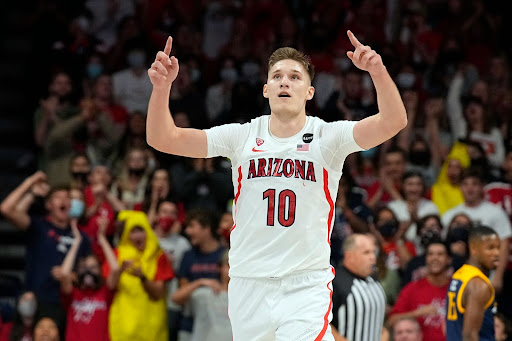 Pac-12 men’s basketball teams are unlikely to reach the goal of winning 75 percent of their non-conference games, and they might not come close.

The current win rate is 66 percent with just one week remaining before league play ramps up.

Arizona, UCLA and USC are 26-1, with the lone loss against Gonzaga.

Everyone else is 48-37, with a pile of unseemly losses in tow.

There are two opportunities remaining for the Pac-12 to collect marquee non-conference wins: Colorado hosts No. 7 Kansas today, and Arizona visits No. 19 Tennessee on Wednesday.

The Wildcats are essentially a lock for the NCAA Tournament, but the Buffaloes are not — they aren’t even on the bubble at this point.

A victory over the Jayhawks would do wonders for CU’s resume and, by extension, serve to strengthen the league’s super soft middle.

It’s not the most important game of the non-conference season for the Pac-12. But it’s on the short list given how the past six weeks have unfolded for the masses.

(NET ranking: The NCAA Evaluation Tool rankings are used by the selection committee to determine the seeds and at-large bids.)

2. Arizona (11-0/1-0)
Last week: 2
Result: beat Northern Colorado 101-76 and Cal Baptist 84-60
Next up: at Tennessee (Wednesday)
NET ranking: 1 (change: +2)
Comment: There was a stretch, years ago, when Arizona always lost the final game before Christmas break. This team feels different in so many ways.

3. USC (12-0/2-0)
Last week: 3
Result: beat UC Irvine 66-61 and Georgia Tech 67-53
Next up: vs. Oklahoma State (Tuesday, canceled)
NET ranking: 12 (change: +2)
Comment: We don’t have any details on the COVID pause announced Sunday (duration, number of players involved, etc), but we can count. If today happens to be Day Three, then anyone requiring 10-day isolation could return Dec. 29, the day before ASU’s arrival.

5. Washington State (8-4/1-1)
Last week: 5
Result: lost to New Mexico State 64-61, beat Northern Colorado 82-56
Next up: vs. Boise State (Wednesday)
NET ranking: 49 (change: -6)
Comment: In three of their four losses, the Cougars have shot 30 percent or less from 3-point range. Given their reliance on long-range marksmanship, the 3-point percentage and winning percentage will continue to move in lockstep.