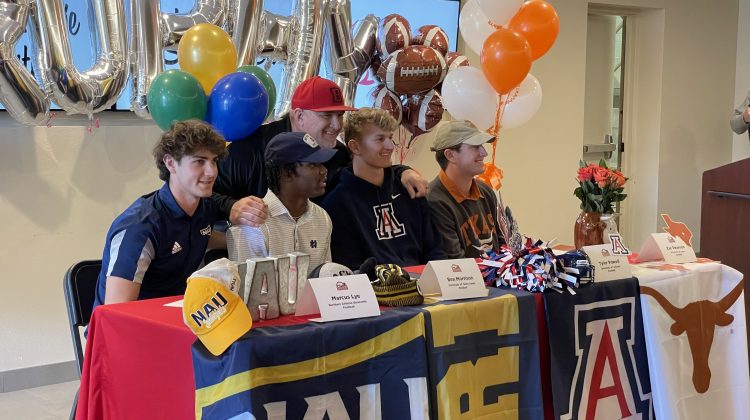 Four Brophy Broncos celebrated National Signing Day with their families, friends, teammates, and coaches as they signed their National Letters of Intent to play football at the next level.

Dozens of people gathered at Brophy College Preparatory to support Benjamin Morrison, Zac Swanson, Tyler Powell, and Marcus Lye as they signed, sealed, and delivered their NLI’s. For head coach Jason Jewell, the day was bittersweet as he reminisced on meeting the four guys for the first time when he first got hired.

Defensive lineman, Zac Swanson made his commitment to the University of Texas on Wednesday and he’s already daydreaming about heading to Austin as soon as possible.

“I’m just so excited that I think about going over the weekends sometimes,” Swanson said. “They had a rough couple of years but I just know this 2022 class is what’s going to bring it back.”

Jewell believes that Swanson will fit in at Texas as a defensive end or defensive tackle and knows he will have a big impact on the Longhorns.

“I know I’m going to be in good hands at the next level and I’m really excited to play,” Swanson said.

Benjamin Morrison also put pen to paper today and feels a sense of relief and excitement. Morrison chose to continue his academic and athletic career at Notre Dame in part because the university reminded him of Brophy. He believes he will be challenged daily in the classroom and on the field, something that being a Bronco prepared him for.

“Going to Brophy I really felt as if my parents sent me here for a reason and I wanted to go to a school like Notre Dame to kind of thank my parents,” Morrison said. “On top of that Notre Dame was just a school that I loved as soon as I stepped on campus.”

Morrison describes himself as a versatile athlete and Jewell couldn’t agree more.

“I’m not gonna call him a lockdown corner because he’s not,” Jewell said. “He can play safety, he can play corner, he’ll tackle people. There’s a reason he had like 30 scholarship offers.”

Broncos kicker Marcus Lye is staying in-state but he’s headed north for Flagstaff and Jewell this NAU is getting a steal.

“He has a bigtime leg, he had a 53-yard field goal this year, he averaged 37-yards a punt, and every kickoff goes in the endzone,” Jewell said.

Lye seems to think those statistics will improve with a little help from the elevation at Northern Arizona University.

Like Swanson, Lye has also daydreamed about taking a weekend trip to Flagstaff to celebrate his commitment. The drive is definitely far more manageable for Lye.

Lye isn’t the only Bronco staying in Arizona next year as Tyler Powell is headed south for Tucson.

Jewell raved about how much Powell has transformed over the years and how his size will be a huge advantage for the Wildcats. Powell only played football for the Broncos for three years but showed the most improvement.

“Tyler has the most upside of anybody and he played the least football of anybody,” Jewell said.

Several staff members spoke about the four players signing their NLIs and most mentioned Powell’s size, weight, and speed.

Throughout the recruiting process, Powell felt drawn to the University of Arizona and was excited about staying close to home.

“I just bonded with the coaching staff more than anyone at other schools by far,” Powell said.