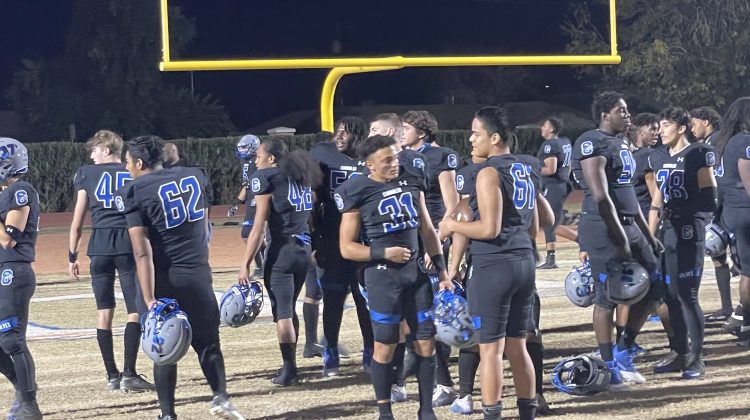 For three and a half quarters, it looked like Chandler High School’s run of six straight state championship appearances (four at the 6A level and two in the Open Division) might come to an end. The Wolves trailed the Liberty Lions 21-7 in the Open Division semifinal with five minutes left in regulation, and needed a finish for the ages to escape bitter defeat.

In true Chandler fashion, that is exactly what they got. The Wolves scored twice in the final five minutes, including a seven-yard strike from quarterback Blaine Hipa to Anyale Velazquez with 2.7 seconds left that sent the game into overtime. In the extra frame, tight end Nason Coleman made a spectacular one-handed touchdown grab in the back of the end zone that proved to be the game-winner and ensured that the Wolves’ dynasty would continue for at least one more week.

Unbelievable. Hipa to Velazquez for a seven yard TD with two seconds left in the game. Chandler can tie the game with a two-point conversion. 21-19 Liberty with 2.7 to go. @Sports360AZ pic.twitter.com/BQLOV8M7sh

“We knew that this wasn’t going to be our last game,” Velazquez said. “We just had to prove it, and we proved it.”

Chandler did indeed prove that it is still the team to beat in Arizona until proven otherwise, but the Wolves’ flaws were also on full display throughout the contest. Chandler turned the ball over six times, including three giveaways in the red zone, and could have run away with the game if not for those mistakes. Hipa was responsible for three of the six turnovers, and struggled with accuracy for much of the game. He appeared dazed after taking a violent hit on a scramble in the first quarter, but managed to regain his composure just in time to lead the Wolves’ comeback.

This game keeps on giving. Insane TD grab by Nason Coleman in the back of the end zone gives Chandler its first lead of the night. 28-21 Wolves @Sports360AZ pic.twitter.com/MZLV1RzLMT

“Blaine Hipa is a warrior,” Coleman said. “You don’t see teams winning with that many turnovers but he kept his mind straight and kept pushing through. We all stuck with it, and look what happened.”

The only obstacle that now stands between Chandler and a sixth consecutive state championship is a red hot Saguaro team that scored an upset victory over top-seeded Hamilton in the semifinal, and the Wolves will need to leave their mistake-laden semifinal showing in the dust if they hope to reach the peak of Arizona high school football once again.