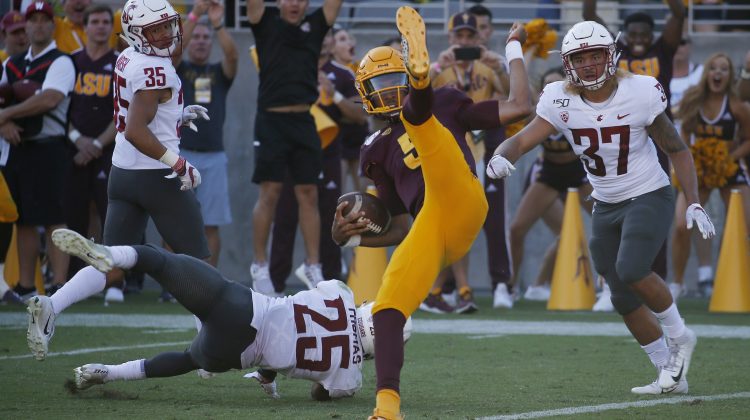 The Hotline is often pummeled on social media for erroneous picks and wayward forecasts, and that’s fine. If we minded being wrong, we wouldn’t predict the result of every Pac-12 football game.

But our projection for the Oregon-Utah game was embarrassing. Mortifying, in fact.

It’s not that we picked the Ducks to cover the spread and win the game outright. That wasn’t an unreasonable view at the time.

The piece that sticks in our gut is the why — the reasons cited for an Oregon victory.

— We thought the Ducks would move the ball successfully on a Utah defense that had been porous against the run. Instead, the Utes were as immovable as the Wasatch.

— We thought Oregon’s big-stage experience would serve it well in difficult situations. Instead, the Ducks responded to trouble like a wide-eyed rookie.

— We thought Utah’s special teams would stumble at the worst time. Instead, they produced the biggest play of the game.

In other words, our forecast was as abysmal as the Ducks’ performance.

Through 12 weeks, the Hotline is slightly above .500 in our picks against the spread for every Pac-12 game.

There are nine left: seven this weekend, plus the conference championship on Dec. 3 and the Cal-USC makeup game.

We have no intention of finishing with a losing record.

All picks against the spread
Lines taken from vegasinsider.com
All times Pacific

Colorado (+23.5) at Utah (Friday)
Kickoff: 1 p.m. on FOX
Comment: This is all about timing: At what point will Utah’s sense of urgency kick in following the gigantic victory over Oregon? If the Utes don’t focus until the second half, then CU just might cover that big number. But Utah looks like a team with next-level purpose and no plans to dawdle against an overmatched opponent. And there’s this: It’s the final home game for Utah seniors who have been through a pandemic and the deaths of two teammates. No mercy. Pick: Utah

Washington State (-1) at Washington (Friday)
Kickoff: 5 p.m. on FS1
Comment: UW’s pass defense is the best in the land and should cause trouble for Cougars quarterback Jayden de Laura in his first Apple Cup. Meanwhile, we’re curious to watch the Huskies manage their quarterback position. Will they use Sam Huard? (Tough spot for a rookie.) Or might Dylan Morris produce a career game in his first Apple Cup? WSU has been the better team over the course of the season, possesses more playmakers, and is substantially healthier. Pick: Washington State

Oregon State (+6.5) at Oregon
Kickoff: 12:30 p.m. on ESPN
Comment: The line has been cut in half from its outrageous opening figure, and for good reason: The Beavers won the game with no name last season and possess the personnel to mirror Utah’s approach offensively against the depleted Ducks defense. The issue for OSU is the other side of scrimmage: Its defense doesn’t share Utah’s talent and could struggle to contain Oregon’s running game. Expect a bounce-back performance from Anthony Brown. Pick: Oregon.

Arizona (+20) at Arizona State
Kickoff: 1 p.m. on Pac-12 Networks
Comment: If anything, the talent disparity is greater than it was a year ago when the Sun Devils rolled to a 70-7 victory and sent Kevin Sumlin packing. The grit gap has closed significantly, but even a career game from quarterback (and Phoenix-area native) Will Plummer won’t be enough for the Wildcats. They need a stunning number of mistakes by ASU (penalties and turnovers) in order to create the conditions for a dramatic finish. The Sun Devils are perfectly capable, but a double-digit margin feels right. Pick: Arizona

Notre Dame (-19.5) at Stanford
Kickoff: 5 p.m. on FOX
Comment: The FOX announcing crew had better come loaded with tales to spin, because this could be over in the first half. The Cardinal has lost six consecutive games — five of them against teams far less capable than Notre Dame, which has lost just once (to Cincinnati). Only Utah is truly comparable to the Irish, and it humiliated Stanford two weeks ago. Pick: Notre Dame

Brigham Young (-7) at USC
Kickoff: 7:30 on ESPN
Comment: The Trojans must beat BYU and Cal to qualify for a bowl berth, but there’s good reason to think the postseason is a low priority for the players as their season under interim coach Donte Williams comes to a close. Even if focused, does USC’s defense have enough resolve to hold up against the relentless BYU running game? Will the offense execute consistently against the opportunistic Cougars? We are skeptical on every front. Pick: BYU

Cal (+7) at UCLA
Kickoff: 7:30 p.m. on FS1
Comment: The Bruins are playing for their eighth win, Senior Day pride and not much else: They have clinched a bowl berth but cannot win the division. Meanwhile, the Bears (4-6) are in desperation mode and have won their last three games that weren’t impacted by COVID. We’re wary of placing too much emphasis on a blowout win over woeful Stanford, but Cal’s offense is humming like it hasn’t in years. And UCLA’s defense is anything but stout, especially at home, where the Bruins are allowing 29 points per game. Pick: Cal

@ASUSoftball has ‘something to prove’ at Regional in Tempe:
🔱 @Trisha_Ford’s squad motivated to defend home field for the fans
😁 @Jessi_Puk’s contagious energy
🥎Freshman phenom @SandersCydney

🖤🏋🏾‍♀️ Retweeted · Eliav Gabay
@eliavgabay
Here’s the full clip of DT & Skylar getting into it during the timeout.

Carlen Retweeted · Eliav Gabay
@eliavgabay
Here’s the full clip of DT & Skylar getting into it during the timeout.

(Championship is in Scottsdale @GrayhawkGolf btw, May 27-June 1).