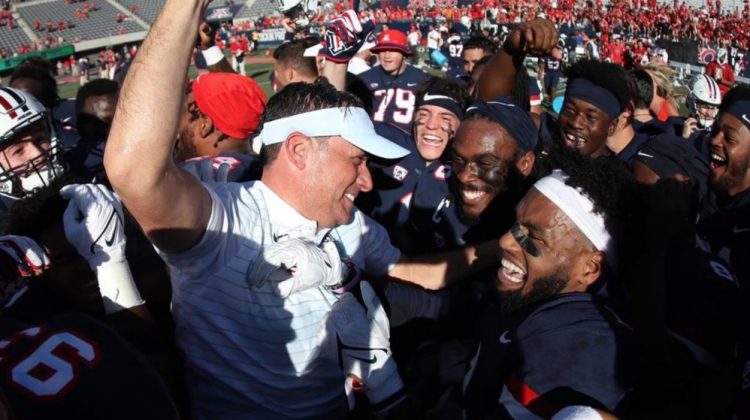 Instant reaction to Pac-12 developments on and off the field …

The Bears were without seven starters and 24 players total, including quarterback Chase Garbers, due to a combination of injuries and COVID protocols.

It tarnished the game but not the outcome, at least not for the winners.

Arizona’s victory counts the same as it would have with Garbers on the field and the Bears at full strength.

It’s momentous for the Wildcats, not because of where it will lead this season but because of what it removes: a stigma that had hounded Jedd Fisch’s program.

Barely a word was uttered about Arizona this season without accompanying mention of the nation’s longest losing streak. In the media. With fans. With recruits. The streak was everywhere at all times, a part of Arizona’s existence.

Now, the stigma is gone. The program is free to move forward, unencumbered by a remnant from the previous regime, and to generate its own momentum.

Nobody will refer to Arizona as the team that broke the nation’s longest losing streak only because the opponent had COVID issues.

The losing streak simply won’t be mentioned because it no longer exists, which is exactly what Fisch needs and the reason the circumstances don’t matter a lick.

Our assessment of Cal’s situation comes straight from the Department of Two Things Can Be Equally True:

— Yes, the Bears were placed at a competitive disadvantage by the City of Berkeley’s public health protocols, which are more stringent than those elsewhere in the conference. No other team would have faced the hoops and hurdles that derailed the Bears this week.

— At the same time, their performance on offense cannot entirely be explained away by Garbers’ absence. Teams play without their starting quarterback all the time, but the drop-off is rarely as steep as we saw from the Bears.

It was atrocious — much worse than any team should perform with a backup quarterback, especially considering the substandard competition.

So, yes: The Bears were dealt a terrible hand by Berkeley. But they should have been better on offense. Much better.

We present Jimmy Lake, the second-year Washington coach who just might be in his final year.

Lake’s triple-whammy of self-inflicted woe began Monday, when he was asked about Oregon as a recruiting rival and proceeded to disparage the Ducks academically. It was totally uncalled for and beneath his position.

Then came Saturday’s matchup against the Ducks, which exposed UW’s offensive offense and ended with a mystifying coaching decision: Down eight with two minutes left, Lake punted on fourth-and-10. The snap sailed out of the end zone for a safety that gave the Ducks a two-score advantage.

But that’s not all. It’s barely the start, in fact.

During the game, Lake was caught on video striking one of his players (Ruperake Fuavai) in the helmet while attempting to separate him from Oregon players and prevent a brawl with the Ducks.

The Hotline will refrain from issuing final judgment on the incident, because the video angle makes it difficult to determine the extent of the contact.

But it was enough to prompt Washington athletic director Jen Cohen to issue a statement:

“We are aware of an interaction between Head Coach Jimmy Lake and a student-athlete during the first half of Saturday’s game. We have high expectations of the conduct of our coaches and we are working to gather more information on this matter.”

Regardless of reprimand or punishment (or neither), it was a bad, bad look for a head coach who is piling up bad looks while his team accumulates losses and the administration determines whether a change is needed.

Combine the comments about Oregon, the contact with the player and the substandard coaching, and Lake’s seat has added heat in the past week.

Oregon and Utah took major strides toward a collision in the conference championship game.

The Utes (5-1 in league play) dominated Stanford on Friday night and need only win two of their last three — they play Colorado and Arizona — to lock up the South title.

Meanwhile, Oregon (5-1) can essentially clinch the North with a victory next week over Washington State.

The Ducks have a one-game lead over WSU (4-2) and a two-game edge on Oregon State (3-3), which has dropped back-to-back road games (to Cal last week and to Colorado, in overtime, on Saturday).

But the situation is far more intriguing than it seems with two teams in control of their divisions.

That’s because the Ducks and Utes will likely play twice: in Salt Lake City in two weeks and then in Las Vegas, for the conference title, in four weeks.

If the Utes win either game, they would knock Oregon out of the playoff race.

But if the goal is the Rose Bowl, the Utes might be better off losing to the Ducks later this month, potentially setting up a win-win situation in Las Vegas:

— A win over Oregon would send the Utes to Pasadena as the conference champs.

— A loss to Oregon would send the Ducks to the CFP and the Utes to the Rose Bowl as the runners-up.

Oregon’s pursuit of a College Football Playoff berth received a boost and took a hit this weekend.

The hit: Fresno State was walloped at home by Boise State, which will assuredly result in the No. 23 Bulldogs dropping out of the playoff rankings.

The Ducks, who beat FSU in the season opener, need as many victories over ranked teams as possible to strengthen their resume. Without FSU included in the top 25 next week, the Ducks will have just one — the win at Ohio State.

The boost: No. 3 Michigan State’s loss to Purdue helps the Ducks by decreasing the likelihood of the Big Ten producing two playoff teams.

Meanwhile, Wake Forest’s first loss ensured that the ACC won’t be involved in the CFP discussion.

As the situation stands, the top threats to No. 4 Oregon being squeezed out of the CFP — even if the Ducks finish as a one-loss Pac-12 champion — are No. 2 Alabama beating Georgia in the SEC title game and No. 8 Oklahoma running the table.