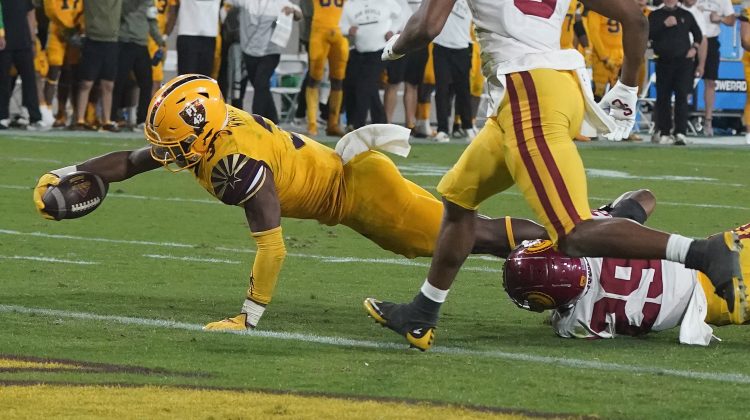 A Pac-12 football season stacked with unexpected developments might have a few more in store, including this:

Washington State vs. Penn State in the Las Vegas Bowl.

That’s right. The team that lost its opener to Utah State, got blown out at home by USC and fired its head coach and four assistants in October — that team has a path to the second biggest stage in the Pac-12’s postseason lineup.

The Cougars are one of several teams in contention to become the conference’s first participant in the reinvigorated Las Vegas Bowl, which has moved to Allegiant Stadium and features an opponent from the Big Ten.

Stranger things have happened. For instance: Firing your head coach in the middle of the season for refusing to get vaccinated during a once-in-a-century global pandemic.

How might the Cougars find their way to Sin City?

— First, we should acknowledge that the Alamo Bowl is officially the No. 2 game in the Pac-12’s postseason lineup.

In reality, facing the Big Ten in Las Vegas trumps playing a Big 12 team in San Antonio unless that team is Oklahoma (which it won’t be).

The Cougars must beat Arizona and Washington to finish with a 7-5 overall record and 6-3 mark in the Pac-12.

That would make an appearance possible, based on the selection procedure.

For the Alamo, Las Vegas, and Holiday bowls, the assignments don’t track exactly with a conference record. Any of those bowls have the right to pass on Team X in favor of Team Y as long as there is no more than a one-game difference in conference record.

If the Cougars win out and finish 6-3, they would be no worse than one game back of Arizona State, which could top out at 7-2.

— That said, WSU clearly would benefit from a loss by ASU, producing a 8-4 overall mark and 6-3 league record for the Sun Devils.

With a mere one-game difference in overall record, identical conference records, and WSU’s head-to-head victory, the Cougars would have a case.

Plus, there’s no guarantee Herm Edwards will be coaching ASU come kickoff (because of the NCAA investigation).

Alamo Bowl
Team: Oregon (9-1/6-1)
Home games (one): Oregon State
Road games (one): Utah
Comment: If the Ducks finish 11-2, with a loss to Utah in Las Vegas, they might sneak into the Fiesta based on their final ranking. But the results of games in other leagues will play a vital role in the process.

Holiday Bowl
Team: Washington State (5-5/4-3)
Home games (one): Arizona
Road games (one): Washington
Comment: The Cougars couldn’t have asked for a better situation to clinch their postseason berth, what with a last-place, warm-weather opponent making a long trip on a short week to play in in the cold, hard rain of the Palouse. If they blow this, the pressure will be intense in the Apple Cup.

Sun Bowl
Team: UCLA (6-4/4-3)
Home games (one): Cal
Road games (one): USC
Comment: If the Bruins win both, then the Las Vegas and Holiday bowls become much more likely. Lose both, and they might be playing a few miles down the road.

Non-qualifier
Team: Arizona (1-9/1-6)
Home games (none): N/A
Road games (two): Washington State, ASU
Comment: Our advice: Put Will Plummer in a titanium suit in a locked closet in an underground bunker in the Rincon Mountains for 10 days so he’s healthy for the Territorial Cup. That game means far more to the program than the trip to Pullman.

Non-qualifier
Team: Cal (3-6/2-4)
Home games (one): USC
Road games (two): Stanford, UCLA
Comment: The Bears are on track to play this week, until or unless somebody sneezes.

Non-qualifier
Team: Colorado (3-7/2-5)
Home games (one): Washington
Road games (one): Utah
Comment: There’s something to be said for the impact November success can have on offseason momentum. CU has two quality chances to gain steam for the winter and spring … Okay, maybe just one.

Non-qualifier
Team: Washington (4-6/3-4)
Home games (one): Washington State
Road games (one): Colorado
Comment: Better chance the Huskies lose both than win both, unless they change quarterbacks. Dylan Morris isn’t tall enough to be a high-end pocket passer, he’s not mobile, and he’s not accurate. So why not give the kid a try?