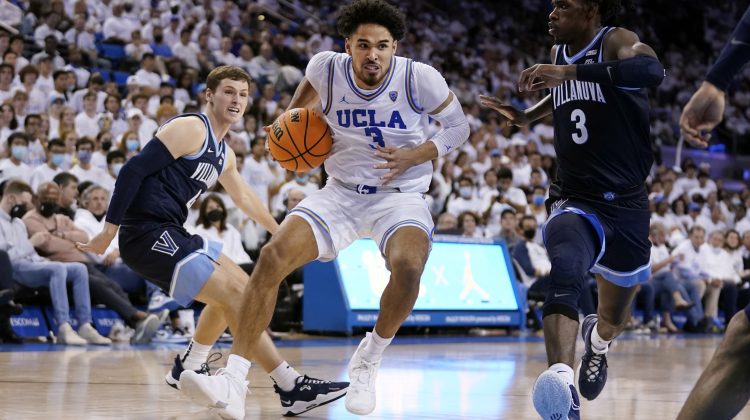 A week into men’s basketball season, the Pac-12 is running ahead of pace: It has won 77.8 percent of its non-conference games, with 28 victories against just eight losses.

That exceeds the 75-percent success rate outside of league play deemed critical to sending at least six teams to the NCAA tournament, according to a data analysis performed by the Pac-12 several years ago.

The deep dive revealed a strong correlation for all the major conferences: Win three-quarters of your non-conference games, and you should send half your teams to March Madness.

But the Pac-12’s current success will be difficult to maintain as teams enter holiday tournaments, where heavyweight opponents await.

If the Pac-12 has won 78 percent of all games by Dec. 1, it should be well-positioned for six or seven bids on Selection Sunday.

1. UCLA (3-0)
Last week: 1
Result: beat Villanova 86-77 (OT) and Long Beach State 100-79
Next up: vs. North Florida (Wednesday)
Comment: Six days until the Gonzaga rematch, which doesn’t need to be half as compelling as the original. We would happily settle for one-fourth.

3. Arizona (3-0)
Last week: 4
Result: beat UT-Rio Grande Valley 104-50 and North Dakota State 97-55
Next up: vs. Wichita State (Friday)
Comment: Had the Wildcats used this pace of play back when they were really loaded — we’re talking six or seven years ago — maybe they would have beaten Wisconsin.

4. Oregon (2-1)
Last week: 2
Result: beat SMU 86-83, lost to Brigham Young 81-49
Next up: vs. Chaminade (Monday)
Comment: After that complete no-show in the Phil Knight Invitational, the boss would be justified in never giving the Ducks another dime.

5. Washington State (3-0)
Last week: 5
Result: beat Seattle 79-61 and Santa Barbara 73-65
Next up: vs. Idaho (Thursday)
Comment: Based on our assessment of WSU’s non-conference schedule — hint: it’s impossibly soft — any loss would be considered a bad loss for the Cougars.

8. Utah (3-0)
Last week: 9
Result: beat Sacramento State 89-56 and Bethune-Cookman 86-55
Next up: vs. Boston College (Saturday)
Comment: Did Both Gach get his old locker back? Was it even occupied last year? And given how chaotic things were, did the equipment staff have a chance to do his laundry?

9. Oregon State (1-2)
Last week: 8
Result: lost at Iowa State 60-50 and Tulsa 64-58
Next up: vs. Samford (Thursday)
Comment: With every subsequent loss, those three weeks in March seem more like a fever dream than hardcourt reality.

11. Washington (2-1)
Last week: 12
Result: beat Northern Arizona 73-62 and Texas Southern 72-65
Next up: vs. Wyoming (Thursday)
Comment: Every victory should be cherished, because there aren’t many left.