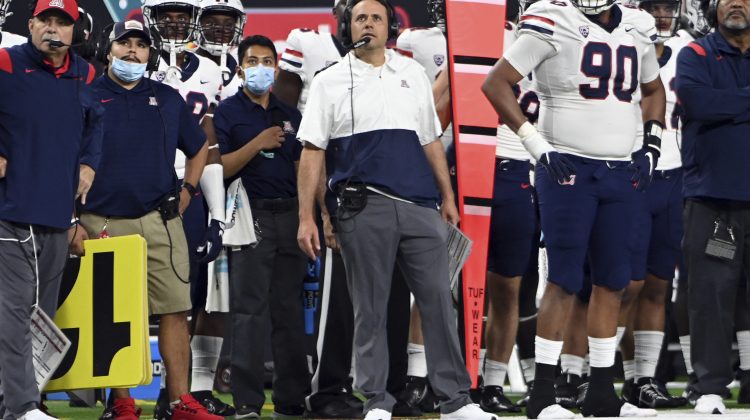 70-7. It’s written across a billboard on the I-10 freeway halfway between Tempe and Tucson. It’s etched in the minds of players, coaches, students, and alumni at the University of Arizona.

The 2020 Territorial Cup was the final straw that ended the brutal Kevin Sumlin era, capping a winless season.

Enter Jedd Fisch. Former coach on the New England Patriots staff. One win this season shows progress for the Wildcats, regardless of how it happened.

A second victory, this time against Arizona State, would signal a changing of the guard in Tucson. Even a close game would be a sign that things are trending upwards.

Despite not being here last year, Fish echoes the sentiment of notable alum and other advisors on staff. “It’s Personal.”

He learned more about the rivalry from Tedy Bruschi prior to his first press conference as the head coach.

“There’s clearly animosity towards each other,” Fisch said in his weekly press conference on Monday. “When it’s 63-7 and you call a pass on 4th-and-4, there’s something to that. So, we remember.”

The Territorial Cup is personal for Jedd Fisch and @ArizonaFBall. 😳

The Wildcats have exceeded expectations this season. Fisch has earned the right to build that program for at least the next three seasons.

ASU on the other hand is disappointing this season. This was supposed to be a 10 win season that ended with roses. Instead, Sun Devil fans are preparing for another seven or eight win season with a chance at a small bowl in El Paso or Las Vegas.

The odds on DraftKings have the Sun Devils at -20 against the spread. However, talent is only taking them so far. The grit the Wildcats have shown could be enough for them to cover that spread.

It’s a 2 p.m. kickoff inside Sun Devil Stadium and on the Pac-12 Network.