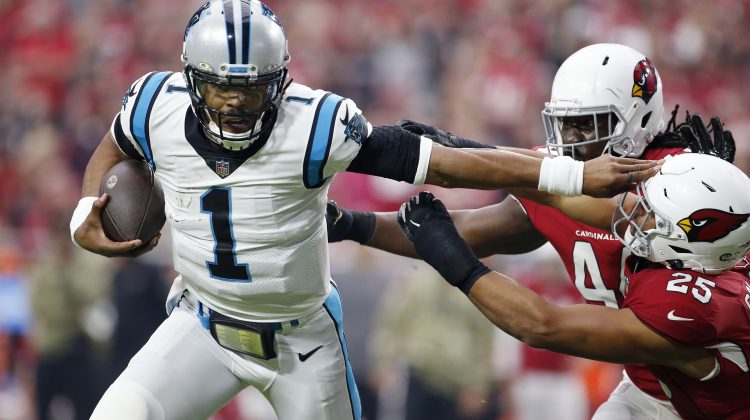 The Carolina Panthers didn’t’ seem too fazed by the 2,000-mile cross country trip, blowing out the Arizona Cardinals 34-10 Sunday afternoon in Glendale. With the win, Carolina improves to 5-5. The Cards fall to 8-2.

Here are five things we learned at State Farm Stadium.

1. Mid-November Nap – The NFL is a long season. Even longer this year with 17 regular season games. Football is, without question, a game of ebbs and flows. With that being said, it’s hard to decipher how the Cards could look so bad, playing at home, against a below-500 team starting an XFL quarterback (PJ Walker). The first half numbers were both puzzling and troubling. Yes, Carolina entered the game allowing the second-fewest total yards in the NFL (293) but you’ll be hard-pressed to find an uglier first half of offense in Kliff Kingsbury’s tenure as head coach. “That team out coached us, outplayed us,” Kingsbury said after the loss. “They just got after us. We can play a lot better, coach a lot better, as well.” The Panthers scored on five of their first six possessions, outgained Arizona 249-62, and held a 16-3 edge in first downs through the first 30 minutes of game action.

More Than a Cam-eo – Just two days after re-signing with his old team, Cam Newton put an exclamation point on his return to the NFL taking an early first quarter snap and diving into the corner of the end zone to give the Panthers an early lead.

On the next Carolina offensive possession, Newton doubled down – hitting Robby Anderson on a beautiful throw in front of Arizona cornerback Marco Wilson near the same spot he scored his first touchdown of 2021. Newton, whose name didn’t even appear on the two-deep depth chart handed out to media in the press box, had little more than a dress rehearsal last week in preparation (a practice Friday and a walk through on Saturday).

Happy Homecoming – Rest assured Haason Reddick had this game circled on the calendar for some time. The former Cardinals’ first-round pick left this off-season via free agency and has proven his worth in Matt Rhule’s defense.

Sunday he validated it against his former team, registering 1.5 sacks, three quarterback hits, a forced fumble, and four total tackles in the blowout win.

Christian McCaffrey – Pure Greatness – Sometimes you just tip your cap and enjoy the show. The Cardinals, like the rest of the NFL the past five years, simply had no answer. At halftime, McCaffrey out performed the entire Arizona offense by himself (84-62), showing his usual explosiveness running the ball, as well as catching it. In under three quarters of action, the former star rushed 13 times for 95 yards (7.3 per attempt) and caught 10 passes (on 10 targets) for 66 yards.

How do you defend this if you’re Isaiah Simmons? pic.twitter.com/fk2nLIbvRF

“He does that to a lot of people,” Kingsbury said. “He’s a great back. He did his thing.”

In-Zane-ly Accurate – Former Arizona State star, and Cardinals’ kicker, Zane Gonzalez is having quite a first season with the Panthers. Sunday he connected on three first half field goals (44, 48, and 49 yards) and a 27-yarder in the fourth quarter to bring his season total to an impressive 19-21 (90.5 percent). The 2016 Lou Groza Award winner hit a 57-yarder against the Falcons on October 31st.

The Cardinals jump back into division play next week, heading to Seattle to take on the 3-6 Seahawks.