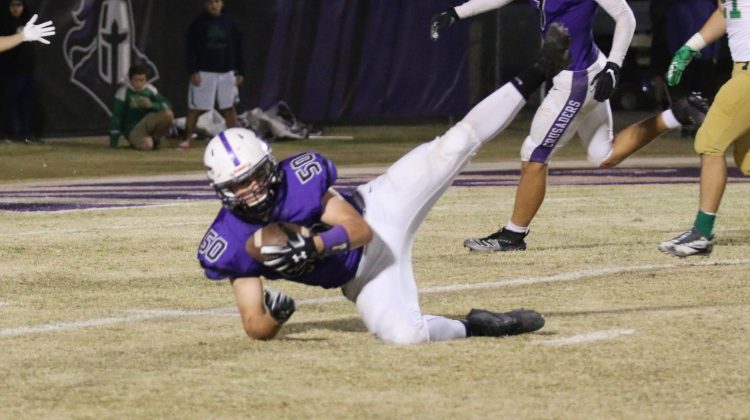 Oftentimes, we read the stories of high school athletes getting ready to play at the next level in college. In order for athletes to get there, it takes an incredible amount of work and skill, but it is also crucial for players to avoid injuries.
Unfortunately for Northwest Christian linebacker Luke Johnson, the injury bug bit him too many times and forced him to end his promising football career before he got the opportunity to play at the next level.
“Ever since I put on my pads, I wanted to play for as long as I could,” Johnson said. 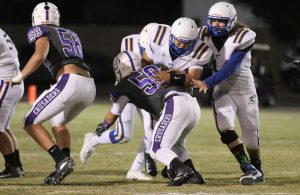 Johnson first put his pads on when he was seven years old and fell in love with the game. His favorite part about playing was the connection he felt with his teammates.
“Just being under the lights and playing in front of your friends alongside your brothers, That’s where all of the hard work comes together,” Johnson said. “When you get to do that with your brothers, it’s a great feeling.”
After all of Johnson’s hard work led up to his first season freshman year, it got wiped away in his fourth game. Johnson got sent in on a blitz and broke free on the quarterback. Right before he was able to record the sack, the quarterback shifted just enough to the side that Johnson hit him at a weird angle. He tore his labrum and dislocated his shoulder, ending his freshman campaign. 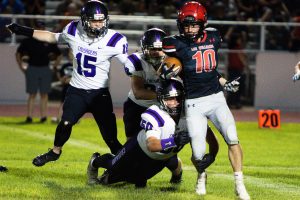 Johnson recovered fully and returned for his sophomore year. Although he was able to play, Johnson fell a little behind his peers during the recovery process in terms of becoming a better player. He did not let that get to him.
“I had to put that thought away and just work, because that is when you’ll see the results in the weight room,” Johnson said. “I couldn’t get the lost time back, so I decided not to focus on it.”
After a healthy sophomore year, things were looking up for Johnson. Colleges were noticing his play and became interested, especially the College of Idaho, where his older brother plays. Black Hills State University and Southern Nazarene University were also interested. 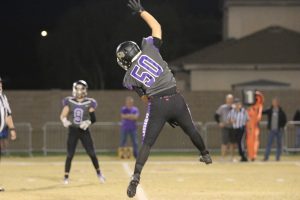 During his junior year, Johnson began to feel some discomfort in his shoulder. It turns out that Johnson experienced a 22 percent loss in his shoulder bone, which meant that there was nothing to stop his shoulder from dislocating again. He needed to undergo latarjet surgery in which they removed part of the collar bone, turned it, and then screwed the collarbone into where his bone was lost.
This once again set back Johnson. He cites a couple of reasons for getting through it.
“My faith in the lord, my brothers on the football team, and my family supported me the entire way,” Johnson said. “They knew how much football meant to me and how badly I wanted to get back on the field.”
Johnson also went through the recovery process with one his teammates, Nathan Eubank. Together, they fought the pain and were “able to let their frustrations out together.”
Poised for a big season year after recovering for a second time, Johnson received an offer from the College of Idaho. They stuck by Johnson throughout the process. 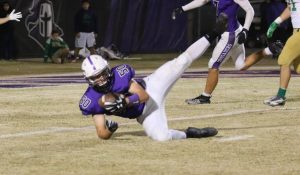 “We didn’t think the shoulder would be a problem anymore, but even after they heard the news junior year, they stuck by me and that I was a part of their family,” Johnson said. “It meant a lot knowing that football was the connection that made us all family. That support definitely helped along the way.”
Unfortunately, Johnson will not get the opportunity to play at the College of Idaho after he dislocated his shoulder and tore his labrum again. Doctors told Johnson that returning to play after surgery would be risky and could potentially lead to a shoulder replacement. He made the difficult decision to hang up his spikes.
“It was probably one of the hardest decisions I’ve ever had to make,” Johnson said. “The decision wouldn’t just affect my immediate life, but it could impact me further down the road. I’ll be going to a different college now and doing different things and meeting different people, and not doing something that I love, so it was very hard.”
Johnson’s parents supported his decision, and would have even if he wanted to keep playing. 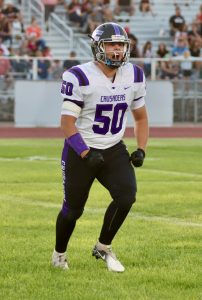 “My parents weighed in, but they let me make the decision on my own,” Johnson said. “They told me that no matter what I decided, it would be the right decision. They just wanted to love me throughout my decision process and no matter what decision I made.”
Although he can no longer be on the field, that is not stopping Johnson from being there for his teammates. He still goes to every practice and is on the sideline during the games. There, he helps out the coaching staff and provides support for his teammates.
“By being there at practices and on the sideline during games, it’s not the same, but I definitely love being there for my brothers and being a part of the team,” Johnson said. “Seeing the freshman linebackers step and play well makes me extremely happy. When they make plays, it feels just as good as when I made plays.”
As hard as it is for Johnson to not play alongside his brothers, he is keeping things in perspective by appreciating everything else that he has.
“Find where your value is,” Johnson said. “Don’t have all of your value in the sport that you play because at some point, it will come to an end. Your value, at least for me, should come from the Lord, your family, your teammates, and just know that if you can’t do something physically, you still have your value.”
Now, Johnson is restarting the college search process. He wants to focus on business and later join the fire department like his father, grandfather, and uncles all did.
One mentality that Johnson uses from being in a family full of fire fighters is to leave situations better than he finds them. He used this all the time in football, especially when it came to practice and getting better every day. Even though Johnson can no longer play football, his mentality will carry him to places he wants to be.
Share Tweet Share