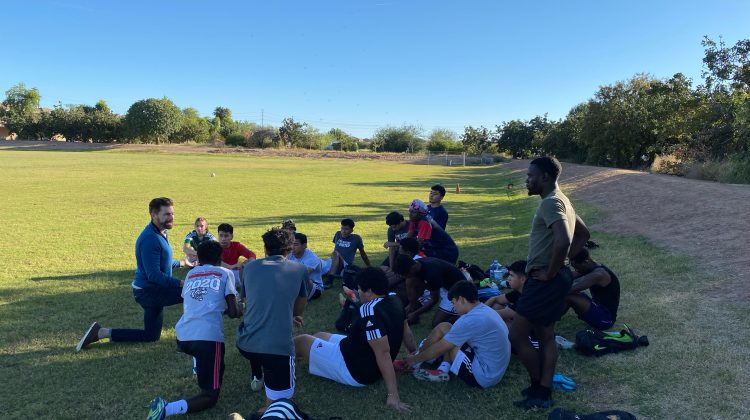 In its inaugural season, the Justice College Men’s Soccer team got into the Southwest Cup playoffs and won its first game. They defeated Embry-Riddle Aeronautical School 6-2. The win meant a lot to the players who all met for the first time in August.
“It’s a really big deal because this is our first season and school year, so it was a big accomplishment to check off,” goalie Juan Guzman said. 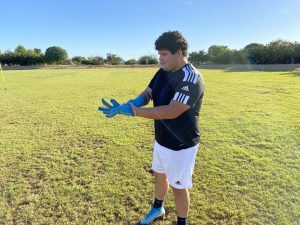 The win did not come easily for Justice College. They were trailing at halftime before making some adjustments. After those adjustments were made, Justice College never looked back.
“Coach calmed us down when the half ended and said for us to go out there and work hard and do what we do best,” forward Jonathan Ayala said. “We went back in there and started talking as a team and did what we worked on at practice. That brought our confidence back and we took over.”
Each player prepares for games differently, but they are all on the same page to treat this like it is any other game.
“This is just like any other game for us,” Guzman said. “Just because it is the playoffs, doesn’t make it any different.” 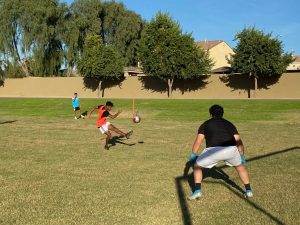 As for the program, it is monumental in more than just the morale sense. Going forward, Justice College wants to make it a habit of winning playoff games. Being able to say they’ve won a playoff game is a major recruiting tool.
“When recruiting and discussing what our first year team has done, you can hear our passion,” coach Joe Paulsen said. “I think it helps us in the recruiting process because we want players that share that passion and mentality.”
Justice College will play Arizona State University in the quarterfinals on Sunday.
“We will have to be sharp,” Paulsen said. “We have to stay disciplined. We have shown character in some of our darkest moments. So I am confident the guys will trust the fact we can endure anything.”
Share Tweet Share
Joe PaulsenJustice College