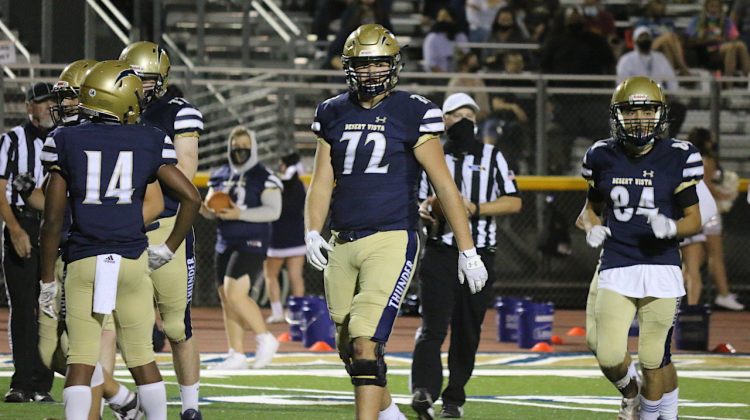 All Gas, No Breaks – That was the motto for the Desert Vista Thunder when Ty Wisdom took over the program as the new head coach.

When Wisdom took the reigns, Desert Vista was coming off of a winless season. As the 2021 season progressed, the Thunder gained their confidence back and eventually found themselves hosting a game in the 6A playoffs.

“We’re a young team and Coach Wiz really changed us around in the first year that he was here,” said senior Jai Rodriguez.

Desert Vista fell to the Casteel Colts in the first round of the 6A playoffs on Friday night but left their home turf proud of what they accomplished in the 2021 season. As the seniors’ high school football career comes to an end they still left their teammates with some words of wisdom (pun intended) and confidence.

Desert Vista’s season came to an end after falling to Casteel 38-29. Despite the loss, the team is proud of everything they accomplished in the last year. Senior @JaiRodriquez believes the future of @thunderfbfamily is in good hands. pic.twitter.com/UUkWRV02PT

“I’m extremely proud of each and every one of these boys,” said Rodriguez. “We work our butts off every day, we hustle, we just overall got so much better since last year.”

Senior Kicker Noah Perez was in tears after the game at the realization that his time playing football at Desert Vista had come to an end. However, the progress the team made was not lost on Perez.

“People don’t give us enough credit,” Perez said. “Going from 0-6 to the eight seed in the 6A playoffs definitely feels really good.”

Emotions were high for @thunderfbfamily seniors following tonight’s loss but they left proud of what they accomplished this season. @Noahprz shared his thoughts on the 2021 season. pic.twitter.com/r73oCq2nuV

“I’m so proud of these guys and this is definitely the most special group that I’ve played with and I couldn’t be thankful for them more,” Perez said.