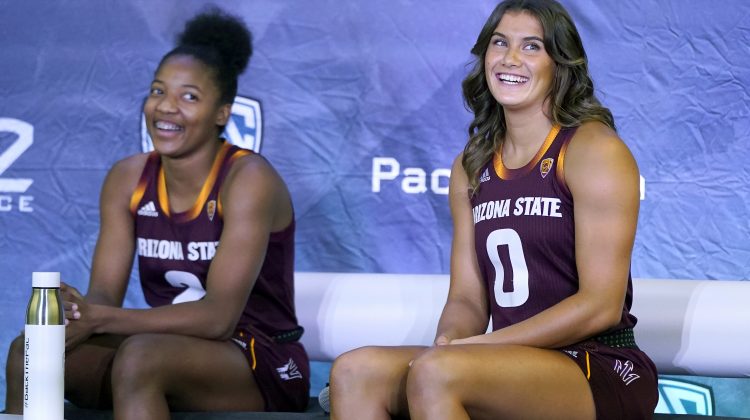 It’s been said numerous times, but 2020 was a crazy year. That madness was difficult for the Arizona State Women’s basketball team, who finished 12-12. That’s the worst record since the 2012-2013 season where the Sun Devils were 13-18.

“This was the best offseason ever! To quote spongebob,” Thorne said. “Obviously, coming off maybe the hardest year I’ve ever had as a coach… I’m excited, I feel really good about this group. I think we’re back to the level that we’re used to being at and are going to compete for a Pac-12 Championship.”

In the Pac-12 preseason polls, ASU is picked to finish eighth. Thorne embraces that, adding that they won the Pac-12 title last time they were picked that low. The energy around this team is fresh, which is a key ingredient to this year’s rejuvenation.

Making the most of each day 🔱 pic.twitter.com/UPqLoyZe9c

This will be the first season at ASU with fans for most of the team. One who is ready for the return is senior guard and fan-favorite Taya Hanson. Prior to the COVID-19 season, she often had young girls who look up to her sign her shoes after games.

“I missed that so much last year, the fans bring so much energy and passion to the game,” Hanson said. “Honestly I don’t play basketball for me, I play it to inspire the next generation… And that shoe signing thing is coming back, I’m getting a whole lot of signatures on these shoes.”

Sophomore guard Jaddan Simmons burst onto the scene as a freshmen, racking up double digit points per game. Despite that, she was snubbed of all-freshman honors in the Pac-12. She says she’s just gearing up to help her team win more games this season.

“I think I made a lot of progress [in the offseason],” Simmons said. “I think this year teams are going to have to worry about me shooting it, like going behind screens and shooting it. The main thing I worked on is my shot and then creating more opportunities for my teammates.”

One new face in the program is Jade Loville. The senior transferred from Boise State after finishing second in the Mountain West in scoring (17.3 PPG). Loville was raised in Scottsdale before moving to Washington in high school. Part of the reason for wanting to play in Tempe, is to have her dad at more games.

One player fans will have to wait another year to see is freshman Meg Newman. Thorne confimred that the No. 33 player in the 2020 class tore her ACL this summer and will likely miss the whole season.

Despite not being able to play, Newman’s teammates and coaches are rallying with her and coaching her up. They also say she has the best shoes on the team, along with Loville.

The season opens up on Tuesday November 9 against Northern Colorado. It’s a home match at 8 p.m. following the men’s season opener at 5 p.m. against Portland.

On Friday November 12, Briann January will have her jersey retired. She’s the third women’s basketball player to earn that honor.

We are so excited to honor all-time great Briann January’s No. 20 jersey on Nov. 12!