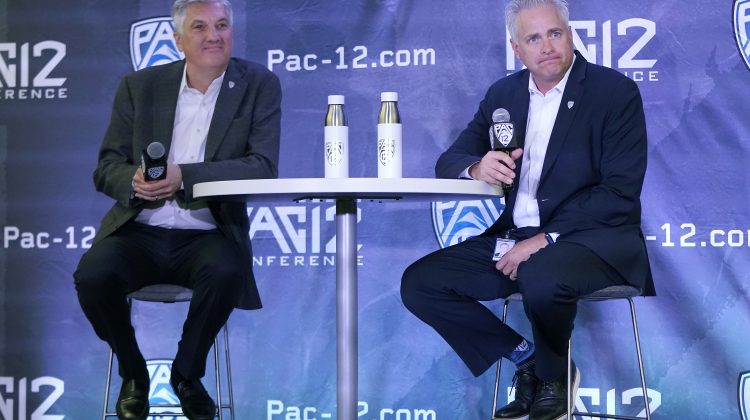 Commentary on Pac-12 developments on and off the field, and court …

While the Ducks are known throughout the Pac-12 (and the country) for having first-class football facilities — fans of the other 11 teams might prefer the terms extravagant, ostentatious, lavish, gaudy, excessive, outrageous, even garish — the university’s plans for a new indoor practice facility don’t strike us as over the top.

And in one aspect, they are brilliant.

Oregon has been using the same indoor practice field, at the Moshofsky Center, since 1998. It’s older than the equivalent facilities in Corvallis, Seattle and Pullman.

It’s not getting torn down to make room for the 170,000-square foot replacement, which will be funded by private donations.

Instead, the two buildings will complement each other. With football using the new structure, there will be more space and time available for Oregon’s Olympic sports to use the Moshofsky Center.

(Critics of college athletics spending on football often overlook the trickle-down benefits for the 18-20 sports that don’t generate a profit.)

But the most significant part of the new facility, which is scheduled to open in 2024, isn’t the sheer size or the player amenities or the roof, which will be made of tinted polymer panels to allow natural light.

Nope, the most significant part of the new facility is the … ventilation system.

The Hotline has become obsessed with airflow, and it has nothing to do with aerosols that spread COVID.

The West is drying out, and wildfires could cause more damage and disruption over the next 10 years than they have in the past 10, with most of it concentrated in the parched months of August, September and October.

Oregon’s new facility will have a high-tech, ultra-efficient ventilation system that manages the interior air quality.

If wildfires rage in the Sierras or Cascades, the Ducks won’t have to shut down practice for days or weeks, year after year.

They might look back on the new facility’s ventilation system alone as having been worth the cost of the entire project.

And we just might see the same technology used in facilities throughout the Pacific Northwest.

A program with soaring hopes for on-field success despite an off-field scandal encountered a setback last weekend, allowing 28 unanswered points in a 35-21 loss that gave Utah control of the division.

And this week, Pierce made a curious change on his social media accounts: He removed all references to ASU on his Twitter and Instagram profiles.

Is his job in immediate jeopardy? Will he be in charge of ASU’s defense in their next game, Oct. 30 against Washington State? (The Sun Devils are off this weekend.)

We won’t speculate on his employment. But the development underscores the fragile foundation in Tempe, where three assistant coaches have already been placed on leave and the NCAA is reportedly interviewing those involved.

What version of ASU will we see on the other side of the bye?

The scandal could bond players and coaches and, in the aftermath of the loss in Salt Lake City, fuel a late-season drive to the division title.

Or it could undermine team chemistry and the ability to execute on the field, leading to a stretch-run collapse.

However the 2021 season ends for the Sun Devils, it won’t be boring.

There was no shortage of former Pac-12 players on opening night NBA rosters.

In fact, the conference claimed more alumni than any of its peer leagues, at least on a relative basis.

According to the Pac-12, there were 62 former players on full contracts and another four on what’s known as a two-way deals (between the NBA team and its G League affiliate).

That’s 5.2 players on full contracts for each Pac-12 team.

The Pac-12’s stellar array of NBA alumni is one of its best marketing and recruiting tools.

And if you’re curious:

UCLA led all Pac-12 schools with 12 players on NBA rosters, followed by USC with 10 and Arizona, Oregon and Washington with eight.

If the AP preseason poll is any judge, the conference has taken merely a baby step toward gaining national respect.

Only two teams were included: UCLA, which is No. 2 (behind Gonzaga) and No. 13 Oregon.

Nobody else made the cut, although USC, Arizona and Colorado all received votes.

Oregon’s inclusion is no surprise; the Ducks have been ranked frequently during the Dana Altman era.

And UCLA’s perch makes loads of sense given the return of so many key players from the Final Four run.

In other words, AP voters took the March results into account with the Bruins but not with the other teams (USC, Colorado and Oregon State).

We get the UCLA piece: It’s a blue blood program whose NCAA tournament breakout star, Johnny Juzang, has returned for the 2021-22 season.

But based on the success of last spring and the talent in place this fall, the Pac-12 probably didn’t get the respect it deserves from AP voters.

Which creates the opportunity for an upside surprise.