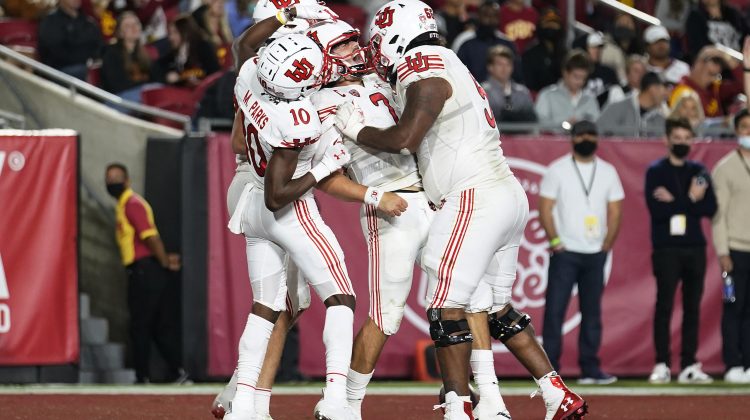 In 10 minutes, Utah transformed its Saturday, its season and its postseason.

In 10 minutes that spanned the end of the second quarter and the beginning of the third, the Utes blasted through USC for 267 yards, four touchdowns, an insurmountable lead and one indisputable statement: They are back.

Excluding last winter, the Utes haven’t been home for the holidays since back in 2013, at the end of the multi-year roster fortification process that followed their transition into the Pac-12.

Their path looked treacherous in late September after a loss to Brigham Young — we didn’t think that was possible — and an overtime defeat at San Diego State.

The Utes need just three wins in their final seven games to qualify — a stretch that includes dates with struggling Colorado and Arizona.

Sweep those South cellar-dwellers, and the Utes would need one more victory, anywhere, against anybody, to secure the six victories needed for qualification.

But why stop at six?

A victory Saturday over Arizona State would leave Utah as the Pac-12’s only undefeated team in conference play, with head-to-head wins over USC and ASU and only one other legitimate contender in the division: UCLA, which visits Salt Lake City at the end of the month.

Win Saturday, and by the close of October, the Utes just might have full control of the South and a bowl berth locked up.

To the projections (with home and road games remaining) …

Alamo Bowl (vs. Big 12)
Team: Arizona State (5-1/3-0)
Home games (three): Washington State, USC, Arizona
Road games (three): Utah, Washington, Oregon State
Comment: The Sun Devils are the best team in the conference right now. But we’re not quite convinced they will be the best team in the conference on the first Friday of December. Beware the early peak.

At-large bowl
Team: Washington (2-3/1-1)
Home games (four): UCLA, Oregon, ASU, Washington State
Road games (three): Arizona, Stanford, Colorado
Comment: The presence of Arizona and Colorado on the upcoming schedule lies at the heart of our projection for the Huskies. The team we watched take Oregon State to the wire is good enough to thump the Wildcats and Buffaloes and find two more victories somewhere, somehow.

Non-qualifier
Team: Cal (1-4/0-2)
Home games (three): Colorado, Oregon State, USC
Road games (four): Oregon, Arizona, Stanford, UCLA
Comment: If the Bears sneak into the postseason — and we haven’t given up on them entirely — their salvation would be the cross-division schedule. Drawing Colorado and Arizona instead of Utah and ASU gives them a flicker of hope.

Non-qualifier
Team: Colorado (1-4/0-2)
Home games (three): Arizona, Oregon State, Washington
Road games (four): Cal, Oregon, UCLA, Utah
Comment: Scoring 27 points in two conference games is bad, but this is worse: Only 17 were scored when the outcomes were in doubt against USC and ASU. The other 10 came in garbage time.

Brad Cesmat ·
@bradcesmat
Interesting view from @wilnerhotline on a basketball-only school in the mix. Pac-12 Survivor Guide: Expansion options from Spokane to Dallas - https://t.co/0q12ukm5QT via @sports360az
View on Twitter
3
6